International community should increase the pressure on Sri Lanka, experts say | World | Breaking news and perspectives from around the globe | DW | 06.02.2010

Human rights organizations have called on the Sri Lankan government to end its crackdown on journalists and political activists. Greater pressure by western countries could help accelerate improvements there. 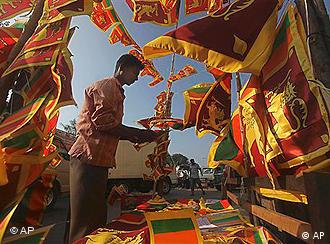 Sri Lanka is celebrating its 1948 independence from Britain

Sri Lanka's president Mahinda Rajapaksa said on Thursday he acted in his country's best interests by rejecting international accusations of human rights abuses towards the end of the quarter-century civil war with Tamil Tiger separatists. Speaking at the first Independence Day celebrations since the end of the conflict, Rajapaksa said that "relations with foreign countries are smoothening."

Yet Amnesty International and Human Rights Watch this week reported of growing harassment on media representatives and opposition supporters in Sri Lanka following the presidential election on January 26. Rajapaksa secured a landslide victory, defeating his former army chief Sarath Fonseka in the poll, which opponents claim was rigged.

According to Alan Keenan, the Sri Lanka project director at the International Crisis Group, the clampdown comes as no surprise.

"There's a long tradition in Sri Lanka of when there's an election, taking revenge on those who had dared to oppose them," Keenan told Deutsche Welle. "This has been going back for decades."

Charu Lata Hogg, an associate fellow in the Asia program of British think tank Chatham House, said the government moves were also in line with Rajapaksa's rule since he took office in 2005.

"Critics have increasingly come under attack since Rajapaksa was first elected in 2005," Hogg told Deutsche Welle. "What we're seeing is a reemergence of an authoritarian regime." 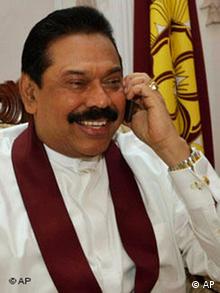 Rajapaksa won with a landslide 18 per cent margin

During the campaign, Rajapaksa had vowed to defend press freedom and speed up the investigations into the assassinations of journalists in the past. There have been many hundreds of attacks on journalists and opposition political campaigners in the past years.

"The fact that President Rajapaksa made populist promises before his election has to be taken with a pinch of salt and any true investigation would point to the culpability of people in very high places," Hogg said. "So it is a bit naive to expect that these investigations will ever come to fruition."

Despite Sri Lanka's history of election-related crackdowns, this time, there wasn't even real reason for it, said Sam Zafiri, Amnesty International's Asia Pacific director. After all, the Tamil Tigers had been defeated and Rajapaksa had a mandate to lead, he said.

"He has an incredible opportunity to bring this country together," Zafiri told Deutsche Welle. "This is the moment where the government should be saying, we're embracing human rights, and instead, Rajapaksa is entrenching his authority even more. It's quite alarming."

Though Western nations have scrutinized Sri Lanka in the past for its human rights record, Hogg said there was more leverage that they could exercise.

"The international community has a role to play and could definitely apply pressure on Sri Lanka," Hogg said. "But the point is whether it would have the will and the commitment to do so."

Sri Lanka was looking to re-legitimize its relationship with the West, she said. Both trade-related measures and development aid could help give some pull.

"It is seeking a deeper relationship with Europe and with the US," Hogg said. "I would think that there's still potential to exploit the dependency that Sri Lanka has on the Western governments to bring about some changes in the human rights situation in the country." 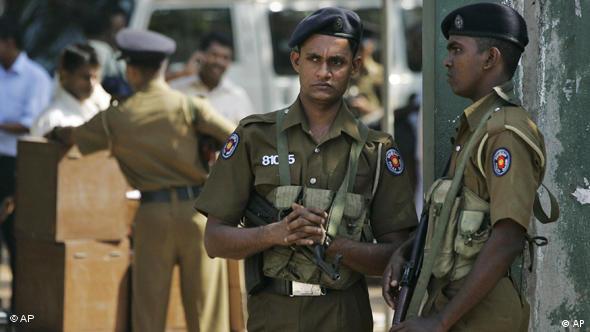 Keenan said there were limits on what Western governments and international organizations such as the World Bank and the Asian Development Bank (ADB) could accomplish in Sri Lanka. Nonetheless, the financial assistance - running in the hundreds of millions of dollars each year - was significant.

"I think were there coordinated efforts between both the individual governments and the World Bank and ADB, that combination could have a lot of influence over the behavior of the Sri Lankan government," Keenan said. Ideally, these efforts should take place in coordination with India and Japan, which are both politically and economically influential, he said.

"Unfortunately, those countries and institutions have preferred to address issues bilaterally or directly with the Sri Lankan government and not as part of a coordinated effort to influence the government's policy," Keenan said.

For example, donor nations and international financial institutions could stipulate more precisely how their money was being used.

"They should say, look we're happy to give you money, but we want to give money in a way that really benefits the people in stable and sustainable ways," Keenan said.

Parliamentary elections are due to take place in March or April. Both Hogg and Keenan agree that the clampdown on the opposition and journalists will intensify over the next months.

"That is the idea: to put enough fear within civil society, within opponents and dissidents within the country to ensure that there is no true challenge," Hogg said. "That has been the kind of authoritarian policy that has been in place for a while now and I would anticipate a worsening of that before the parliamentary elections."

But Keenan said the international community can work against this.

"Governments need to continue to do whatever they can to send strong messages - both publically and privately - that this is not acceptable, that democratic traditions in Sri Lanka are long and deep, but badly damaged and that this behavior by the government is further weakening their claim to be a legitimate member of the world community of democracies," Keenan said.

The Asian Tsunami devastated Sri Lanka, and affected both Tamils and Sinhalese alike. On the fifth anniversary, Deutsche Welle describes its impact and discusses the government's recent victory over the Tamil rebels. (26.12.2009)

The EU is threatening to end a special trade deal with Sri Lanka over its poor human rights record. Human rights groups applaud the measure - but also fear the toll it could take on Sri Lanka's garment workers. (22.10.2009)

Opinion: While the war may be over, peace is still some way off

Only a couple of years ago few would have believed that Asia's longest running civil war was drawing to a close. Deutsche Welle's Ranjitha Balasubramanyam says while the war may be over, peace is still some way off. (17.05.2009)