How has Sri Lanka coped with the Asian tsunami and a civil war? | News and current affairs from Germany and around the world | DW | 26.12.2009

The Asian Tsunami devastated Sri Lanka, and affected both Tamils and Sinhalese alike. On the fifth anniversary, Deutsche Welle describes its impact and discusses the government's recent victory over the Tamil rebels. 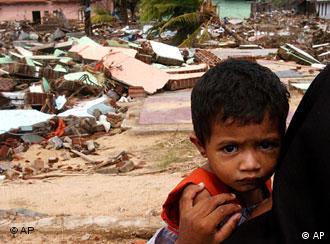 The tsunami left thousands dead and many more homeless

After Indonesia, Sri Lanka was the country most affected by the Asian tsunami. More than 35,000 people lost their lives and half a million were left homeless, affecting both Sinhalese and Tamils alike. It was thought the disaster would bring the two groups together, but the hopes of the international community were not realized. Neither the 2002 ceasefire nor the catastrophe ended the decade-long conflict between the groups. Today, five years after the tsunami, the future of Sri Lanka remains uncertain.

In a village not too far from the coast, close to the tourist center in the south of Sri Lanka, 55-year old Chandrawathi spins coconut fiber with the help of a wheel to steady the cords as her five grandchildren play nearby. She will always remember December 26, 2004 with a shudder. It was the day that changed her life. “Of course, I can still remember the day. And it still brings me fear. The water came suddenly, and then I saw many dead bodies,” Chandrawathi told Deutsche Welle. 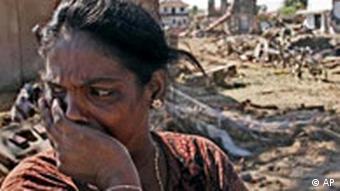 The catastrophe led to an immediate response by many international humanitarian organizations. Chandrawathi was able to get a toilet, a tank to fill with rain water and a new well for her village. Her region, the more-developed, tourist-accessible and Sinhalese-dominated south was able to get on its feet quickly.

The less-developed and hard-to-access north had a very different experience - infrastructure was destroyed during the long civil war, and many schools that were laboriously built after the tsunami were once again destroyed. Gerhard Serafin, Sri Lanka country coordinator of the German NGO Malteser, noticed the strong divisions among the Sinhalese, Tamils and Muslims:

“The help did not only come from the international aid organizations, the people helped each other after the disaster. We found that the funds, which for example Colombo collected for the three ethnic groups - Sinhalese Buddhists, predominantly Tamil Hindus and the Muslim population, - were transferred to the Sinhalese South, the Muslim East, and Tamil North. This shows quite clearly that Sri Lanka is divided along ethnic lines,” said Serafin.

The future of Sri Lanka

In the past, peace activists and aid workers had mainly criticized the Sri Lankan government for not helping the population in the north quickly enough following the tsunami. The government feared that humanitarian assistance could be diverted to the territory controlled by the Tamil rebel group LTTE (Liberation Tigers of Tamil Eelam), dealing yet another blow to the population there. 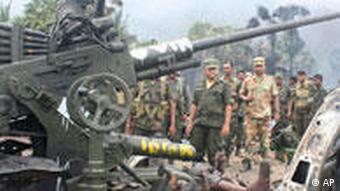 Now, after the victory of the army over the LTTE early this year, this memory is still a vivid one explains Jahan Perera from Sri Lanka's National Peace Council.

“There is a perception in the government and among many people, many belonging to that big majority, that peace has been restored, and that because peace has been restored there is now a normal state of affairs. And it's not only the Tamil minority that feel this way; the Muslim minority also feel aggrieved because they have a feeling that they are marginalized - that both Tamils and Muslims are not wielding real power in this country - political power.

The power to decide on the direction the country should take; the power to decide on government policies. And ethnic minorities are feeling disempowered as a result, and this created in them a certain resentment. If a country is not united, if its people are not united in working together for the development of the country, one section of the people feel a sense of grievance, then it is going to be difficult for the country to move forward in cohesive and rapid manner,” Perera says.

Presidential elections are due to take place on January 26, 2010. In large parts of the country, incumbent President Mahinda Rajapakase is venerated as the people's hero with the status of a celebrity as a result of his military victory over the LTTE. After all, not one analyst considered victory over the LTTE possible. And many Tamils are relieved that the war is over - a war that left civilians caught between the two sides. Still, many are still concerned about the future and large numbers of people still live in refugee camps under difficult conditions.

Basil Rajapakse, the president's brother, is also his political advisor. He emphasizes how important the integration of Tamils is in the political decision-making process. “[W]e are doing it, and we have a lot of Tamil ministers in our government by democratization, we can win and also this Northern Province will be a province of opportunity. Sri Lanka will be a leader in Asia,” he told Deutsche Welle.

The European Union is sending aid and rapid response teams to several Asian-Pacific countries stricken by a tsunami and a typhoon. (30.09.2009)

Aid from the West, including Germany, is helping Asian countries come back from the deadly tsunami of 2004. But the effects of the giant waves are still being felt. (26.12.2006)