An Irish parliamentary inquiry has identified multiple institutional failures that led to Ireland's 2008 banking crisis. While the problem was home-grown, ECB actions had made the crisis worse, the inquiry found. 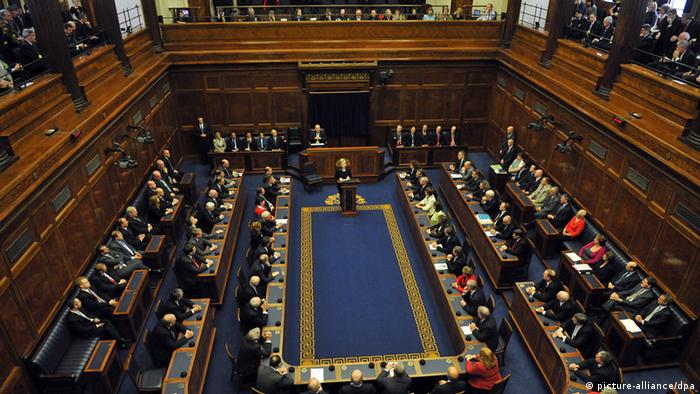 The Irish government agreed to hold the creditors of Ireland's failing banks harmless in the wake of the deflating of Ireland's housing-price bubble which began after 2008. That threatened the solvency of nearly all Irish banks. Many of those banks' creditors were banks and financial institutions in the rest of Europe, and European Central Bank (ECB) regulators were worried about systemic risk if Irish banks were allowed to fail without a bailout by the government - in other words, by taxpayers.

That left Irish taxpayers taking on debt obligations of 64 billion euros ($70 billion), an amount corresponding to nearly 40 percent of Irish annual economic output (GDP). It was the biggest state rescue of banks in the eurozone.

The crisis pushed Ireland into a high risk of default on its sovereign debt payments in 2010, when bond markets lost faith in sovereign bonds of highly indebted European states. Ireland's credit problems cropped up after those of Greece, but before those of Portugal and Cyprus.

The inquiry took evidence from over 100 witnesses over 10 months. It was the first time many former bank executives, politicians and officials in charge of the Irish financial system when it imploded had spoken in public since the crisis broke. 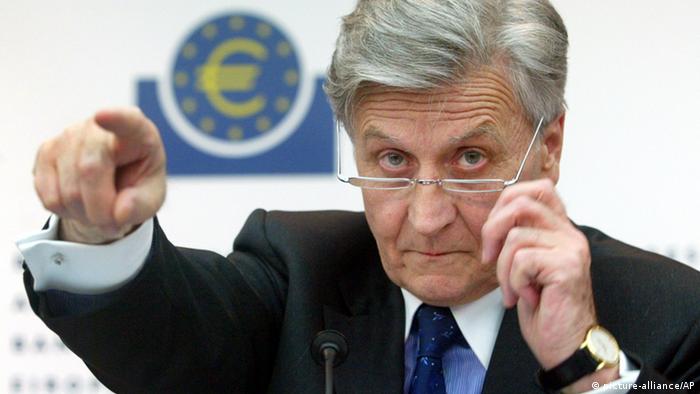 ECB then-President Jean-Claude Trichet essentially forced Ireland's government to pay out the creditors of Ireland's banks for 100 cents on the Euro, by threatening to withhold ECB funding of Irish banks

The fallout from the crisis will burden Ireland with heavy debt for decades to come. A number of former executives apologised during the often day-long hearings. One of them, former Allied Irish Banks chief executive Eugene Sheehy, said his failures were "a matter of eternal shame."

Bank boards have been almost entirely replaced since the crisis, and many Irish banks are now owned by the state as a consequence of their having been bailed out by the taxpayers. Irish banking regulations have been overhauled.

In regards to the mistakes that led to the disasters of 2008, "what we found is that it was no single individual, it was no single institution and it was no single decision. It was the compound outcome of many years [of bad policies and mistakes], it wasn't a conspiracy in a darkened room," Chairman Lynch told a news conference.

"And that would be the concern... [about] the likelihood of this happening again. That it will happen if you don't actually change the culture," he added.

According to the report's findings, banks were allowed to breach lending limits with impunity, which threatened the stability of the financial system, and regulators adopted a "light touch" approach that enabled the mortgage bubble and the ensuing crash.

Moreover, the central bank, "the leading guardian of the financial stability of the state," underestimated the risks while the government adopted long-term spending commitments on the basis of unsustainable cyclical construction activity based revenues, the report said. 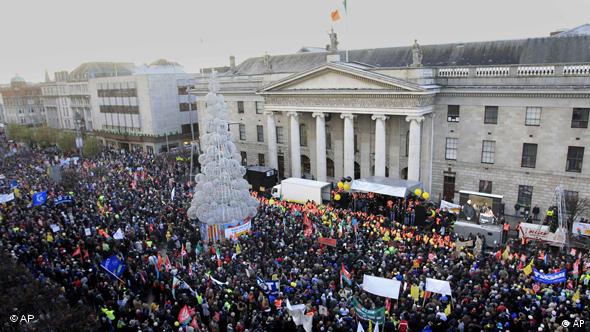 Emotions ran high in the wake of Ireland's financial collapse, with anger at bankers and politicians, and big protests in Dublin

The EU lacked an overall framework to deal with the crisis, and while Ireland's international bailout was inevitable, the parliamentarians sharply criticised ECB's role in the lead-up to the bailout.

"ECB... put the government under undue pressure to enter a programme, but also insisted that there would be no burden-sharing with the bondholders," the report said.

Earlier this week, the European Union's auditors said in a separate report that the handling of bailouts by the EU's executive arm had been "generally weak" in the aftermath of the 2008 financial system implosion and the sovereign debt crisis that began in 2011. In a study of bailouts given to Hungary, Latvia, Romania, Ireland and Portugal, the European Commission was found to have a series of problems.

The problems included different countries being held to quite different standards, limited quality control, weak monitoring of implementation, and shortcomings in documentation, according to the report by the European Court of Auditors (ECA).

"The European Commission was not prepared for the first requests for financial assistance during the 2008 financial crisis because warning signs had passed unnoticed," the ECA said in a statement accompanying the report.

The ECB has previously denied that it applied excessive pressure on Ireland. Jean-Claude Trichet, who was ECB President at the time, refused to appear before the Irish parliamentary inquiry, as did current ECB President Mario Draghi.

A month before the parliamentary committee began work, ECB released Trichet's 2010 correspondence with then Irish finance minister, along with a statement defending his warning of limits on ECB emergency funding for banks and his refusal to allow a bail-in of senior bank bondholders. 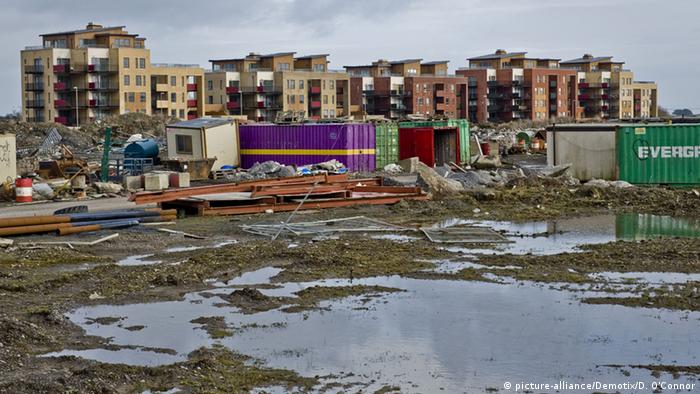 In Ireland as in Spain and the USA, the bursting of their respective real estate bubbles left a lot of houses standing around half-finished

In other words, Trichet rejected suggestions by Ireland that bank bondholders should bear a part of the losses from non-performing loans to Irish banks after the country's real estate bubble burst. Trichet's 2010 statement pointed to a risk of "negative spillover effects on the financial stability of Ireland, as well as on other European countries," had the bank bondholders been forced to take losses.

The eurozone's financial system, unlike that of the USA, still hasn't overcome the fallout from 2008 in terms of the consequences to sovereign debts. On Tuesday this week, for example, Italy agreed a deal with the European Commission to unburden its banks of non-performing loans, which will involve setting up a "bad bank" that will take those loans onto its balance sheet in a way that's meant to be consistent with EU rules limiting state aid to the private sector.

In Ireland, in addition to the problem of a crushing national debt, citizens still continue to struggle with other fallout from the housing bubble - including repossessions of houses.

The EU's handling of debt-crushed Greece, which has received three distinct bailouts by European Union institutions and the International Monetary Fund so far in the wake of 2008, is to be handled in a separate ECA audit. It should make for interesting reading - at least for aficionados of Schadenfreude.