Silence reigns in Ireland′s new suburbs | Europe | News and current affairs from around the continent | DW | 09.03.2010

Since its building boom ended, Ireland has become a land of unoccupied and half-finished houses. Now, housing market analysts in the country are asking themselves the proverbial question: What went wrong? 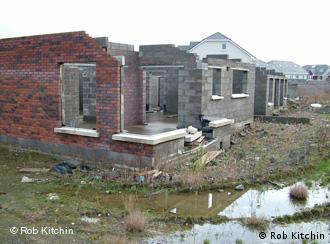 Fifteen to 17 percent of Ireland's housing is unoccupied

Irish motorists have become all too familiar with the empty, dimly-lit "ghost estates" just off main roads on the outskirts of cities and towns.

There are between 300,000 and 345,000 vacant houses and apartments in a country with only 4.5 million people, according to two recently published university studies. If those figures are correct, it means some 15 to 17 percent of all dwellings in the country are presently unoccupied.

The typical Irish town of Saggart, southwest of Dublin, is a case in point. Just beyond its historic core with its arched bridge, fountain and ancient church, the new estates begin their outward sprawl. In some of these, the only signs of life are the occasional toy in a garden, or plant on a balcony.

In the late stages of Ireland's housing bubble, the market "went stark raving bonkers” writes Fintan O'Toole in his book "Ship of Fools: how stupidity and corruption sank the Celtic Tiger."

By 2006, construction accounted for 25 percent of economic activity in Ireland. The average house price peaked at just over 300,000 euros ($407,000) in early 2007, reflecting a seemingly insatiable demand for property in a country that has always valued homeownership. 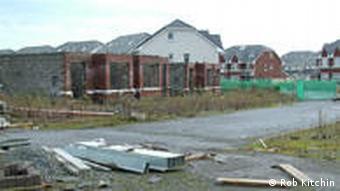 Demand for suburban housing is unlikely to improve soon

In a seller's market, it made sense for developers to build speculatively. The banks also cashed in on the acquisitive frenzy by offering 100 percent mortgages and easing the conditions customers had to meet to qualify for a home loan.

Independent economists warned the country was becoming too dependent on construction, but politicians, estate agents and bank economists played down the warnings.

"Ireland still has a deficit in infrastructure," current Prime Minister and then Finance Minister Brian Cowen told the broadcaster RTE in July 2006.

The boom petered out in the gathering world recession in early 2008, affecting the entire sector. Since then tens of thousands of construction professionals have lost their jobs and half of the country's architects are unemployed.

Low demand and market saturation have also caused housing prices to plummet and banks to tighten their purse strings: The number of new mortgages has fallen by 75 percent since the final quarter of 2007. Ireland has become a land of empty houses.

Rob Kitchin, who headed the team of researchers from the National University of Ireland, predicted that many houses on the ghost estates will be bulldozed, especially those estates in rural northwestern Ireland, where demand is unlikely to recover in the next five years. 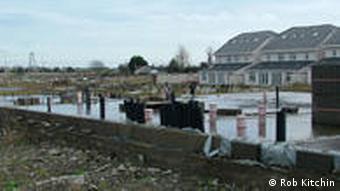 Many politicians ignored warnings that the housing market was inflated

"I think demolition is the last route really," he told Deutsche Welle. "Nobody particularly wants to see assets destroyed."

But while Ireland's poor housing market has hurt many, it has been good news for some. Students, in particular, stand to benefit from the increased availability of quality accommodation, and developers are now willing to rent new apartments to them.

"These are strange times," said Deirdre Corcoran, the accommodation officer at Dublin Institute of Technology. "Things have changed dramatically from a situation where we had huge pressure and students were literally getting the dregs, or weren't able to get suitable accommodation."

What is a home?

One of the showpiece projects of the economic boom was the regeneration of the once-notorious Fatima Mansions estate in Dublin. Formerly known as Dublin's "heroin supermarket," Fatima has now been rebuilt after years of consultations with residents.

The reconstruction of Fatima involved paying close attention to amenities that local residents wanted, like sports facilities and a community center. The estate's mix of housing owned by local authorities, private owners and student accommodations has led to a growing consensus that Fatima, and similar projects, are examples to follow.

The National University of Ireland's Kitchin believes Irish people need to recover the sense of priority they lost during the boom: "We stopped thinking of houses as homes and started thinking of them as assets or as short-term ventures that would help us get to somewhere else," he said.

A return to those original priorities, plus more emphasis on better practices in both renewal projects and new construction, could be the useful lessons Ireland needs to learn from its Ghost Houses, he believes.

Ireland's economy was once the envy of Europe. Now, with debt mounting, an economic comeback in 2010 appears increasingly unlikely as the Celtic tiger struggles to avoid the fate of Greece. (16.02.2010)

Ireland's government wants to push through a bid to create a "bad bank" to soak up junk investments in the US housing market. The move aims to avoid a collapse in the banking system but could double the country's debt. (16.09.2009)

Even as Ireland announced a 5.5-billion-euro bailout ($7.6 billion) to save Ireland's three biggest banks, critics were questioning whether it would be enough to save the country's troubled banks. (22.12.2008)

Shelter is a basic human need. But finding somewhere to live is a growing problem around the world. Whether you rent, buy or build a house, it's always a gamble – often with a lot of money at stake.

Poland's new housing estates are communities, but not for everyone 28.04.2021