Addressing established norms in African fashion, a Berlin exhibition features works demonstrating how sustainability can be found by revisiting traditional methods and crafts from the continent.

There isn't a single piece from Africa in the permanent collection of Berlin's Kunstgewerbemuseum (Museum of Decorative Arts), admitted the museum's curator Claudia Banz at the press presentation of the exhibition "Afro Futures. Fashion – Hair – Design," lasting from August 24 to December 1, 2019. "But that's about to change," she added.

The new show is the first major exhibition in Germany dedicated to fashion and hairstyling of African origin. Dealing with Europe's colonial past is currently a major concern for museums, and the Kunstgewerbemuseum aims to tackle the issue directly with this exhibition.

In one sense, it's politically correct to avoid labeling artists in restrictive categories. Friederike Tappe-Hornbostel, head of communication of the German Federal Cultural Foundation, dreams of the day when focusing on a designer's African origins can be avoided altogether. "It doesn't actually matter if these artists are from Paris, Dakar or Milan," she said.

While sharing this view, Claudia Banz also underlined that "fashion is a power system" from which many designers are systematically excluded based on race or origin.

The idea behind the show was therefore to give a carte blanche to innovative, high-end designers of African origin to reclaim the narratives established by the Western fashion industry.

The artists' installations show trends including efforts to challenge stereotypes about African culture and to develop sustainable fashion.

African dress patterns are often famously bold and colorful. Lamula Anderson, who was born in Uganda and moved to London to study fashion, tackles that stereotype head-on in her designs. "You should wear bright colors because you are dark," people around her would often say. With her label Lamula Nassuna, she decided to oppose those social norms voiced in her own community by designing black dresses, which, she says, "can be read as a statement of self-expression and opposing the norm." 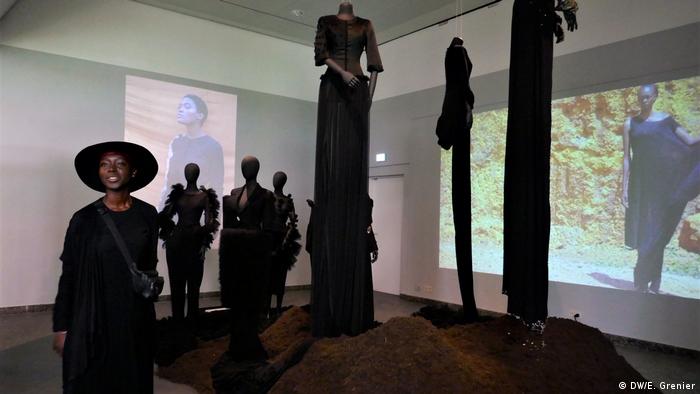 You expect colors, so she goes for black: Lamula Anderson

In their installation, Laura Tarot and Naay Sooley, a designer duo of the label Bull Doff, lend a black-and-white punk aesthetic to the traditional woven cloth that accompanies African people at important stages of their lives — the cover for a newborn baby, a wedding gown or a funeral blanket. Combining traditional weaving techniques with technology, they incorporate unusual materials such as iron, rubber tires and leather into the fabric while reproducing actual patterns from Senegal, Burkina Faso and Ghana.

An important part of African identity that combines aesthetics and politics, hairstyling is also explored in various ways at the exhibition. These range from abstract depictions of traditional hairstyles by illustrator Diana Ejaita to the towering installations of artificial braided hair by conceptual artist Meschac Gaba. Here too, artists challenge established views within the African community.

Senegalese fashion designer Adama Amanda Ndiaye's installation plays with the fact that her hair has always been a big concern in her life. She wears her hair "nappy," which means naturally and without anti-frizz chemicals. Yet she also plays with different hairstyles by adding extensions, braids or wigs.

For an African woman, a natural hairstyle is considered a political statement as it contrasts women's efforts to conform to dominant Caucasian aesthetics by straightening their hair. Yet with her work "Shameless Afro Hair," Adama asks whether hair extensions might be considered part of the Afro hair culture too.

The most sustainable clothes in the world

Sustainability is a concern for many designers today. It's also a key word at the "Afro Futures. Fashion – Hair – Design" exhibition. Two designers represented there impressively show how this concept can translate into truly ecological high fashion. 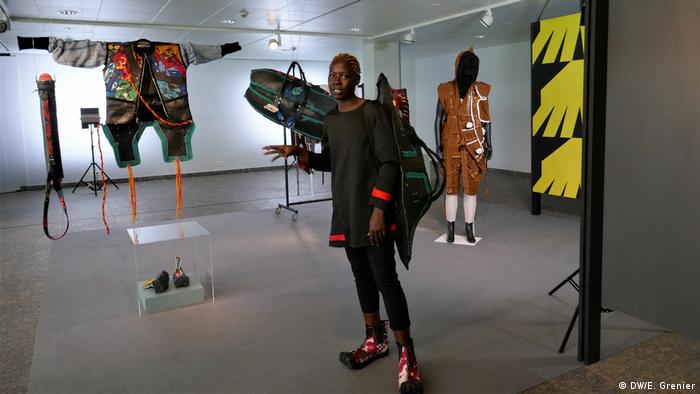 Ugandan multimedia artist Njola works with materials abandoned in places with poor garbage disposal such as the slums of Kampala. The idea of using trash to make new objects is not new in Africa, but the shoes, clothes, backpacks and other accessories of the Njola Impressions label, made with old tires, plastic bags and discarded flip flops, have an amazing sci-fi look while integrating references to African culture. "People love the designs. It's a new thing, it's a new style," Njola told DW. She mentioned for instance the people's reaction when star politician and musician Bobi Wine brought one of her bags made of tires to the parliament: "Everyone was shocked: Rubber in the parliament — but in a good style!"

She and her Njola Recycling Initiative team also get jobless school drop-outs involved in the project. In workshops, they clean streets, collect materials to the sound of music and learn traditional weaving methods that are being forgotten by the younger generations. "We use fashion as a voice to solve community problems," she said.

Another activist for sustainability in the fashion industry whose work is showed at the exhibition is José Hendo. The London-based Ugandan designer criticizes the dumping of second-hand clothing from America and Europe to Africa by integrating elements such as used jeans in some of her pieces. 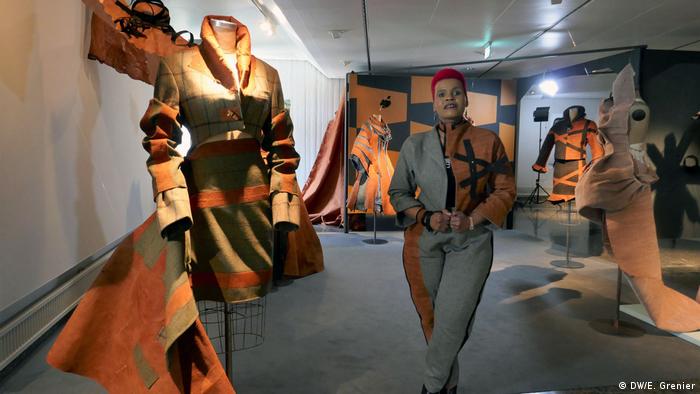 More importantly, Hendo's search for sustainable alternatives has led her to rediscover an ancient method from her homeland with a promising future in the current environmental crisis. The fabric called barkcloth is a kind of leather made out of the bark of the mutuba tree: "And when you take the bark off the tree, it regenerates another bark. So you can harvest every year, up to 60 years plus," she told DW. "For me, as an eco-sustainable fashion designer, that's the most exciting thing I've ever heard of, and I cannot stop screaming and shouting about it. I want to share it with everyone!"

US magazines "Ebony" and "Jet" have influenced generations of black Americans. Former president Barack Obama is no exception. An exhibition in Berlin shows treasures from the archive of the magazine's publisher. (30.04.2019)

'All this junk gets dumped in Africa': how to make eco art from rubbish

Kenyan artist Kioko Mwitiki’s life-sized scrap metal sculptures won him global acclaim. He tells DW about his art's impact, scavenging and environmental challenges facing Africa as it becomes the 'factory of the world.' (16.06.2017)