Defining Black art in the age of Black Power

What was the role of the African-American artist in the 1960s and 70s? A new exhibition at London's Tate Modern explores the many answers to this complex question.

"America the Beautiful" was painted by Norman Lewis, a member of the New York art collective Spiral. This group of African American artists, formed in 1963, questioned the role of the Black artist at a time of great social and political change in the United States.

Should the artist serve himself or his community? And was there even such a thing as "Black" art?

"There wasn't one answer and there wasn't one Black art," says Mark Godfrey, co-curator of Tate Modern's exhibition "The Soul of a Nation: Art in the Age of Black Power."

"For instance," he adds, "There was one set of answers given in Chicago, and another in Los Angeles."

The ghetto is the gallery

In 1966, the Black Panther Party was formed in Oakland, California. It fought for improved housing and education in the Black community and campaigned for an end to police brutality. Young graphic artist Emory Douglas, who illustrated the Black Panther newspaper, believed that "the ghetto itself is the gallery for the revolutionary artist."

Watch DW's feature film "Afro.Germany" on being Black in Germany

For many Black artists, whose work was excluded from most mainstream galleries, the street was indeed the best place to exhibit, inspire and mobilize. A pivotal example of this was "The Wall of Respect," created by the Organization of Black American Culture (OBAC) in Chicago in 1967.

This sprawling mural was plastered across the side of a derelict building on the city's South Side and featured images of Black heroes - from sporting legends to writers and politicians. Soon, similar murals began appearing in African-American neighborhoods across the country.

"According to OBAC, Black heroes were not only celebrities like Henry Belafonte or Muhammed Ali," explains Soul of a Nation's co-curator Zoe Whitley, "but also church pastors, nurses and school teachers."

She points to an example of the "everyday Black hero" in Emma Amos's "Eva the Babysitter." Amos was the sole female member of Spiral and, as Whitley explains, "the babysitter made it possible for Emma Amos to have time for her studio practice." 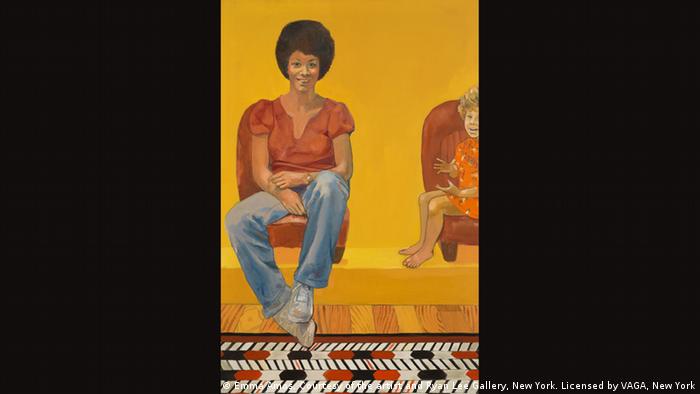 The Black hero is also referenced in works of tribute, such as Jack Whitten's "Homage to Malcolm," which is dedicated to civil rights leader and activist Malcolm X. Whitten used an afro comb to dig through an upper layer of black acrylic, exposing brighter colors beneath in a neat pattern.

The unusual and imposing triangular canvas recalls the Egyptian pyramids Malcolm X visited on a trip to Africa shortly before his assassination in 1965.

Back in Chicago in the late 1960s, artists Jeff Donaldson and Wadsworth Jarrell began exploring the idea of a "Black aesthetic" in more detail. They created a manifesto that highlighted areas where Black art should differ from Western tradition. For example, they favored the use of "Kool-Aid colors" - like cherry, orange and lime - and a clear, direct message.

Whitley points to a vibrant Carolyn Lawrence painting to illustrate this point, explaining, "If you wanted to say, 'Black children keep your spirits free,' you would paint it on the painting - and paint it repeatedly." 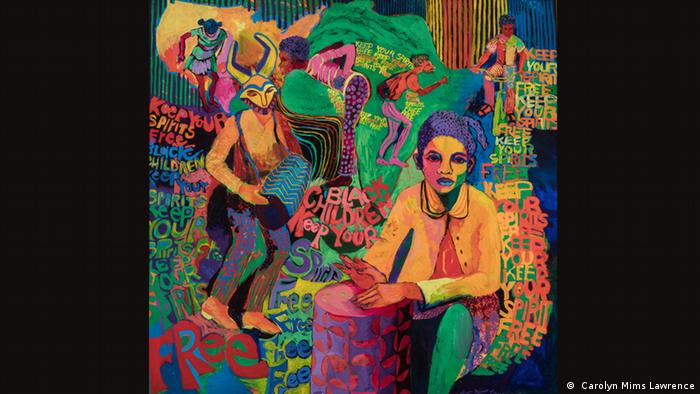 Meanwhile in Los Angeles, Black artists were reclaiming ownership of objects of African-American oppression by reconstructing them using a method known as assemblage.

Read more: Robin Rhode: Painting in black and white, but only in art

Artist Noah Purifoy collected debris from the streets after the Watts Rebellion race riots in summer 1965 in Los Angeles and turned it into imaginative sculptures. Betye Saar would comb the LA flea markets, gathering racist artefacts - such as images of lynchings or depictions of the minstrel show character Aunt Jemima - and then rework them to show new visions of Black Power.

"She appropriated racist memorabilia and turned it into something empowering," Whitley says of Saar. 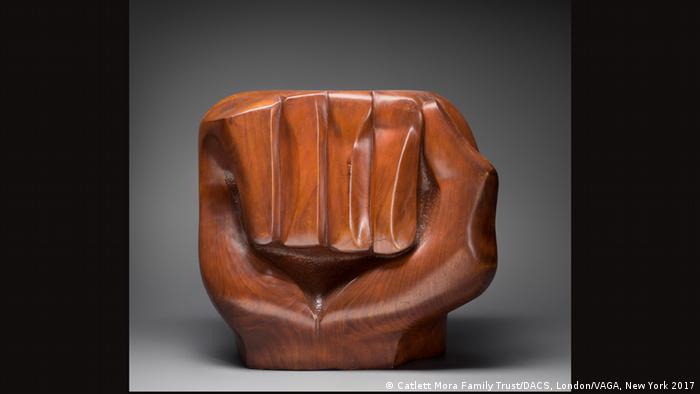 The materials of choice for Illinois-born artist David Hammons were everyday items from Black culture, like black locks of hair, fried chicken or greasy take-out bags.

"He made beautiful, poetic works that some people found controversial and ugly," Godfrey explains. "He wanted it to be celebratory."

To create his 1970 work "Injustice Case," Hammons smeared his body in margarine and pressed it onto paper, before sprinkling the greasy imprint with pigment. The resulting shadowy figure is a powerful representation of Bobby Seale, one of the founders of the Black Panther Party, gagged and bound to a chair in a US courtroom.

For Hammons, his role as an artist was clear. "I feel it my moral obligation as a Black artist to try to graphically document what I feel socially," he said.

Another chapter for Black art

Tate's collection shows the many faces of Black art in the age of Black Power. But after two decades of defining and redefining its purpose, how much political and social progress did the African-American artistic community make?

"The fact that these artists were part of a generation addressing institutional exclusion and systemic invisibility on their own terms is something that needs to be acknowledged and celebrated," says Whitley. "I certainly believe it is a success story, but it doesn't mean that the chapter is finished. It's an on-going story."

"Soul of a Nation: Art in the Age of Black Power" run from July 12 through October 22 at the Tate Modern in London.

Beyond the veil: Bold art by Persian-Arab women at the Marta Herford

The 100 best posters produced in German-speaking countries for publicity, commercials and ads are on show at Berlin's Kulturforum. That's important, as the poster as an art form has come under threat from social media. (16.06.2017)

Is there a more iconic silhouette than Christian Dior's New Look? Marking 70 years since the start of the fashion house, a Paris museum is hosting a huge retrospective on the life and work of the world-famous designer. (05.07.2017)

An exhibition at London's Tate Modern shines a light on a previously overlooked era in American art history and asks the question: What is Black art? (12.07.2017)