Newlywed suicide bombers have struck outside a Catholic church in the Indonesian city of Makassar on Palm Sunday, injuring more than a dozen people. President Widodo said he "strongly condemned this act of terror." 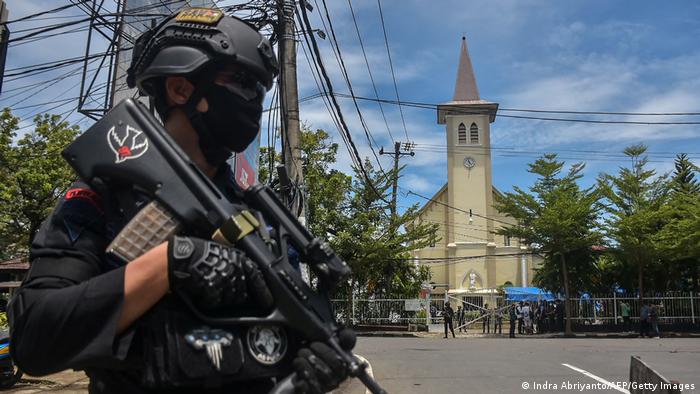 A Catholic church in Indonesia's South Sulawesi province was rocked by a suicide bombing on Sunday, authorities said.

The blast in the city of Makassar wounded at least 14 people including church workers and worshippers.

Police chief Listyo Sigit Prabowo said the attackers were members of Jamaah Ansharut Daulah (JAD), an extremist group also blamed for a deadly church bombing in the Indonesian city of Surabaya in 2018.

"There were two perpetrators killed, one is a man and another one is a woman," Prabowo said. "They're members of the JAD group."

The police said that those who carried out the attack were a newlywed couple that belonged to the local branch of JAD. The couple were only identified by their initials, L and his wife, YSF. They were between the ages of 23 and 26 years old, neighbors told the Associated Press.

Police carried out DNA tests from relatives to determine the attackers' identity.

"Terrorism is a crime against humanity," he continued. "I call on everyone to fight against terror and radicalism, which go against religious values."

"A suicide bombing occurred at the cathedral church in Makassar," Mahfud MD told reporters in the capital Jakarta. "The two (bombers) died."

The congregation had been celebrating the start of Holy Week inside the church at the time of the explosion, South Sulawesi police spokesman E. Zulpan told Reuters.

Wilhemus Tulak, a priest at the church, told local media that the suspected bombers tried to enter the church grounds on motorbikes, but had been stopped by a security guard.

"We were finishing the service and people were going home when it happened," Pastor Wilhelmus told reporters.

He added that some of those wounded were in a serious condition. 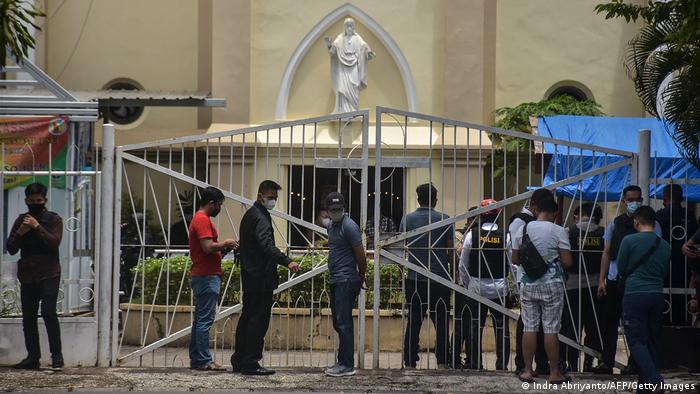 Video from the scene showed police had set up a cordon around the church and cars parked nearby were damaged.

The blast took place at 10:28 a.m. local time (0328 UTC/GMT) on Palm Sunday, the first day of the Easter Holy Week, which commemorates Jesus's entry into Jerusalem.

Makassar Mayor Danny Pomanto said the blast could have caused far more casualties if it had taken place at the church's main gate instead of a side entrance.

The city is Indonesia's fifth-largest urban center after Jakarta, Surabaya, Bandung and Medan, with a population of 1.5 million.

Churches have been targeted previously by extremists in Indonesia, the world's biggest Muslim-majority nation.

In 2018, a dozen people were killed when a family of suicide bombers blew themselves up at churches during Sunday services in the second-biggest city, Surabaya.

The country's deadliest Islamist militant attack took place on the tourist island of Bali in 2002, when bombers killed 202 people, most of them foreign tourists.

Just one day after suicide bombers hit three churches in the city of Surabaya, a police station has been bombed. Authorities said the attack was carried out by a family of five, including an eight-year-old girl.

A young man has injured a Catholic priest after failing to detonate an explosive device in a packed church in Indonesia. The would-be suicide bomber was captured by parishioners.