Just one day after suicide bombers hit three churches in the city of Surabaya, a police station has been bombed. Authorities said the attack was carried out by a family of five, including an eight-year-old girl. 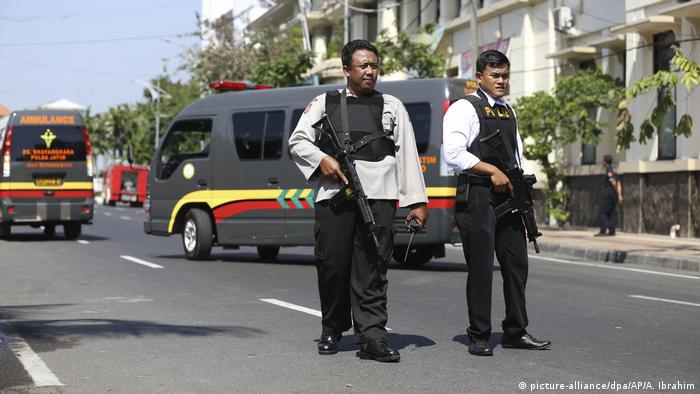 A family of five carried out a motorcycle bombing at the police headquarters in the Indonesian city of Surabaya on Monday, authorities said.

President Joko Widodo denounced the attacks and pledged to introduce a new anti-terrorism law to combat Islamist militants. "This is the act of cowards, undignified and barbaric," he said on television.

The country's top security minister, Wiranto, who goes by one name, said the revised law would allow security authorities to take "pre-emptive" action to stop attacks.

Use of children: The latest attack had similar characteristics to Sunday's church attacks, in that it was carried out by a single family, and in both bombings, young children made up part of the group of attackers.

Resurgence of Islamist terror: Indonesia, the world's largest Muslim-majority country, has seen a resurgence in homegrown militancy in recent years, partly linked to the rise of the "Islamic State." The most serious incident came in January 2016, when four suicide bombers and gunmen attacked a shopping area in the capital, Jakarta.

The country's deadliest terrorist attack occurred in 2002, when bombs exploded on the tourist island of Bali, killing 202 people in one night, mostly foreigners.

Fuel subsidies are a sensitive political issue in Indonesia. But with the subsidy budget tripling, the president says he must let prices rise.

Indonesia is responsible for 60% of global palm oil production, which is used in a variety of goods from food products to biodiesel. The export ban had caused prices to rise drastically on the international markets.