Explosions at three churches in Indonesia's second-largest city of Surabaya have left several dead and dozens injured. Police say a family of six, including two young children, carried out the suicide attacks. 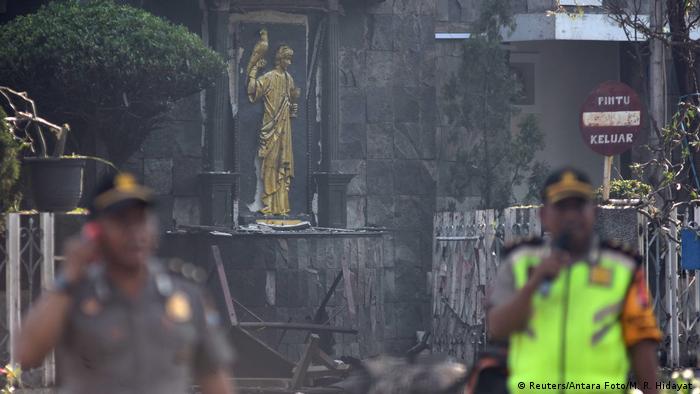 At least 13 people were killed and around 40 were injured on Sunday, when explosions hit three churches during morning Mass in the Indonesia's second-largest city, Surabaya.

Police said the three churches were hit by a family of suicide bombers with links to the local extremist network Jamaah Ansharut Daulah (JAD), which supports the "Islamic State" (IS) jihadist group. Authorities warned that the death toll is likely to rise. 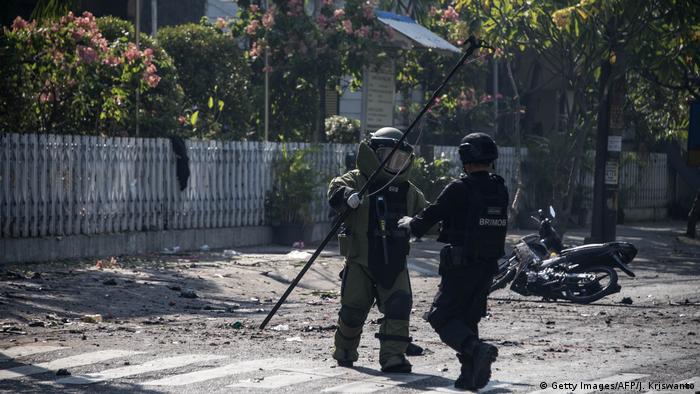 The three blasts took place within 10 minutes of each other

Indonesian President Joko Widodo was quick to condemn the attacks and the use of children as suicide bombers. "These terrorist attacks are cruel and inhuman," Widodo said after visiting victims at a hospital in Surabaya. "There are no words to describe our sorrow for the victims of this act of terrorism."

One witness at the Diponegoro Christian Church told local media that the mother and her daughters were initially denied access to the church grounds by security guards, but they insisted and forced their way inside. "Suddenly she hugged a civilian then (the bomb) exploded," the witness said.

In Jakarta, the Indonesian capital, an official for the country's Church Association expressed outrage over the bombings, but called on people to let the police carry out its investigation. 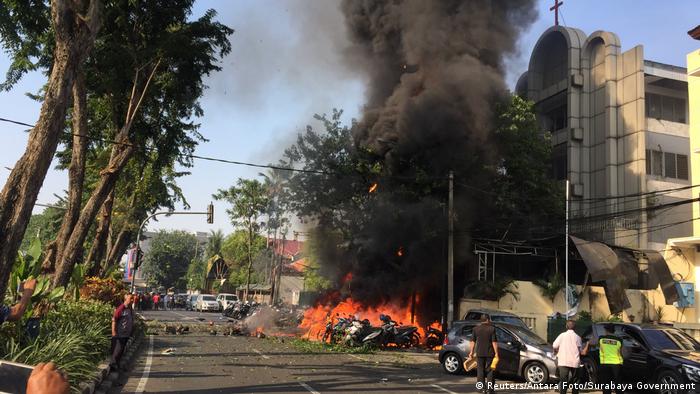 A line of motorcycles burn outside the Pentecost Church, into which the father of the family had driven an explosives-laden car

How many Christians are in Indonesia? Indonesia is a predominantly Muslim country, but it is also home to significant numbers of Christians, Hindus and Buddhists. Christians make up around 9 percent of the total population of 260 million people.

Minorities targeted by extremists: In recent years, extremists have targeted Christians and other minorities through a series of attacks. The rise of IS in the Middle East has at the sam time reinvigorated local terror networks. Sunday's attacks were the deadliest to target Christians since a series of bombings on Christmas Eve in 2000 killed 15 people and injured nearly 100 others.

Attempted crackdown: The Indonesian government has carried out a sustained crackdown on militant extremists, particularly since al-Qaida-affiliated radicals bombed a tourist section of Bali in 2002, killing 202 people.