Bali bombings: Is the suspected mastermind still a threat? 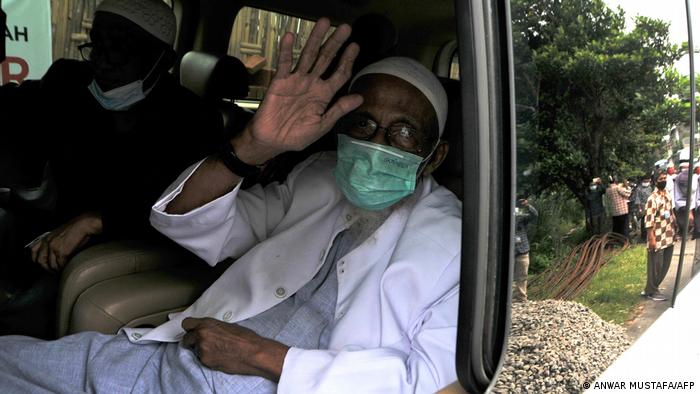 Islamist cleric Abu Bakar Bashir, who allegedly masterminded the 2002 Bali bombings that killed 202 people, was released from prison by Indonesia's Justice Ministry on Friday after serving 10 years of a 15-year sentence.

Bashir was convicted in 2011 of funding an Islamist militant training camp in Aceh Province. He has never admitted having a link to the bombings. However, Bashir was known as the spiritual leader of the al-Qaida-linked Jamaah Islamiyah (JI) network, which has been blamed for the attack.

On October 12, 2002, suicide bombers targeted Bali's Kuta party strip. Among the dead were 164 foreigners from 21 nations, with 88 of the victims coming from Australia.

On Friday, Australian Prime Minister Scott Morrison described Bashir's release as "gut-wrenching," adding that it was not easy to accept that "those who are responsible for the murder of Australians would now be free."

Australian Minister for Foreign Affairs Marise Payne has urged the Indonesian government to ensure that Bashir is prevented from inspiring others to carry out attacks against innocent civilians.

Bashir is 82 years old, and while Indonesian police say they will monitor his activities, Bashir's family told Indonesian media that he will now "rest and gather with his family" in Central Java.

Bashir a leader without followers

Once considered to be a charismatic leader with many followers, Bashir now seems to have been deserted by those once loyal to him.

Terrorism observer Al Chaidar, who teaches anthropology at the University of Malikussaleh in Aceh Province, told DW that Bashir was no longer considered a threat as he had lost most of his supporters.

"He is now like a floating leader who has been abandoned by his supporters," said Chaidar, adding Bashir left JI and eventually joined the "Islamic State"-linked militant group Jamaah Ansharut Daulah (JAD) in 2014 while he was in prison. Al-Qaida cut ties with Bashir after this.

Sidney Jones, director of the Institute for Policy Analysis of Conflict, said that Bashir's time away in prison meant extremists no longer looked to him for help in carrying out attacks.

Although the threat from Bashir may be diminished, and many extremists are picked up by counterterrorism squads before they can attack, Jones said that some small, autonomous terrorist cells in Muslim-majority Indonesia were managing to avoid detection by authorities.

"Sometimes there are those who were able to slip past the detection system to carry out the bombing in Surabaya or attack Wiranto," Jones told DW.

Former Indonesian Security Minister Wiranto, known for being tough on terrorism, was stabbed by adherents of "Islamic State" (IS) during an official visit to Banten Province.

Eddy Hartono, director of Indonesia's counterterrorism agency, BNPT, said the trend of terrorist attacks in Indonesia had changed while Bashir was in prison.

From 1999 to 2014, he said, terrorism networks were oriented toward al-Qaida, with the US, its allies and their assets as the main target. The 2003 bombing of the Marriot Hotel in Jakarta is an example. The Bali bombings also happened when al-Qaida still had a relatively strong influence in Indonesia.

Since the emergence of IS in 2014, terrorism has changed around the world. IS leadership called on terrorists to attack not only US interests, but anyone who disagrees with IS doctrine.

"The message from al-Baghdadi [the late IS leader] has become a triggering factor for terrorism networks in Indonesia," Hartono told DW.

Chaidar warns there is rampant growth in virtual jihadism, especially on social media. The government, he said, needs to address this by providing a strong counternarrative. Another threat is  the emergence of family-based terrorism through exclusive and closed religious groups.

"These groups are attended by violence-oriented clerics, who have spread their teachings to many families in Surabaya, Sidoarjo, Sibolga, West Sumatra and in Aceh. This is a new terrorism development that must be understood by the security forces in Indonesia," Chaidar said.

According to Chaidar, the Indonesian government has joined some international conventions against terrorism, but has yet to ratify others, including the UN convention on listing designated terrorist organizations.

Indonesia has banned two terrorist organizations — the JI in 2008 and JAD in 2018.

"Previously, the deradicalization program was only for ex-convicts and was implemented after someone was convicted. Now, however, the program is implemented once someone becomes a terror suspect," said Hartono, adding the counterterrorism agency works closely with local law enforcement across Indonesia.

"Cyber troops from all ministries and institutions continue to run, monitor and conduct counternarratives," he said.

"When there are actions or preparations that can result in acts of terrorism, law enforcement will act to prevent attacks."

The US will move forward with a military trial for three men suspected of involvement in the deadly bombings in Indonesia in 2002 and 2003. They are being held at Guantanamo Bay, Cuba.

Indonesian police have arrested a senior leader of the al-Qaida-linked extremist group which carried out the 2002 Bali bombings. The militant was also believed to be involved in other deadly attacks.