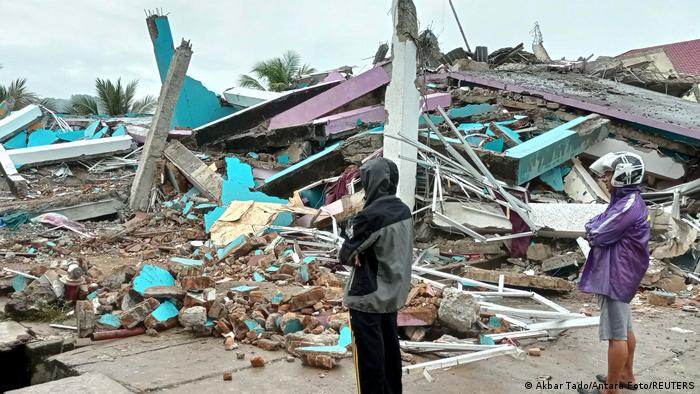 An aftershock jolted Indonesia's Sulawesi island on Saturday as rescue workers combed the rubble of collapsed buildings for survivors after an earthquake killed at least 46 people.

The 6.2 magnitude quake struck in the early hours of Friday, triggering panic among residents of the island, which was hit by a 2018 quake-tsunami disaster that killed thousands.

The country's disaster mitigation agency reported no damage or casualties from Saturday's 5.0 magnitude tremor, which struck close to the original epicenter.

How many people are still missing?

Agency head Doni Monardo told TV news that the search continues for people who could still be trapped alive. A spokesman told reporters that emergency measures had been put in place in the province to help rescue efforts.

Officials said it remained unclear how many more victims could still be under the debris in the city of Mamuju, which was the worst-affected.

The quake flattened a hospital and left a shopping mall in ruins in the city of 110,000 residents.

More than 820 people were injured and about 15,000 left their homes after the quake, the agency reported.

Some sought refuge in the mountains, while others went to cramped evacuation centers, witnesses said, where officials are concerned about potential outbreaks of COVID-19.

Planes and boats packed with food and other emergency supplies have been dispatched to the area.

The Indonesian navy reportedly sent a ship equipped with mobile medical services to take the pressure off Mamuju's still-standing hospitals, which have been flooded with hundreds of injured.

Rescuers said a shortage of heavy equipment was slowing the search effort.

Indonesia experiences frequent seismic and volcanic activity due to its position on the Pacific "Ring of Fire," where tectonic plates collide.

In 2018, a 7.5-magnitude quake and a subsequent tsunami in Palu on Sulawesi left more than 4,300 people dead or missing.

On December 26, 2004, a 9.1-magnitude earthquake struck off the coast of Sumatra and triggered a tsunami that killed 220,000 throughout the region, including around 170,000 in Indonesia.