Dozens of people have died and over 600 are injured after a powerful quake damaged buildings. A large number of people are believed to be trapped under rubble. 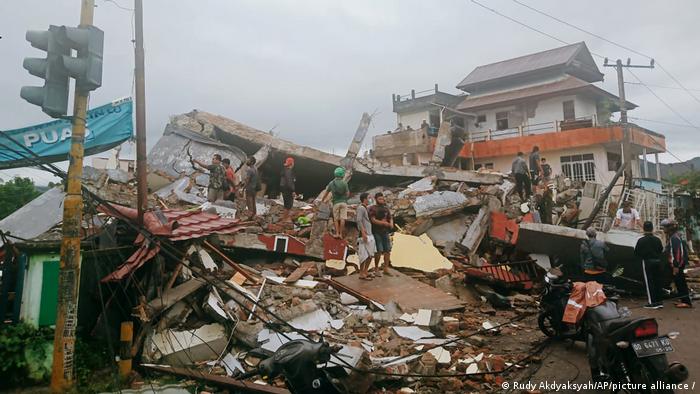 The earthquake damaged around 60 buildings, according to rescue teams

An earthquake struck Indonesia's Sulawesi island early on Friday morning, leaving at least 42 people dead and injuring over 600 others.

The Indonesian disaster agency said rescuers in Mamuju retrieved 34 bodies from the rubble of collapsed homes and buildings. The agency said eight others died and 637 were injured in the neighboring district of Majene.

The national disaster agency said that a further eight people had died to the south of the city.

Many buildings were damaged. Two hospitals and the building that houses the provincial government offices collapsed, said Muhammad Idris, secretary to the governor on national television.

Several videos from the area, including some from the National Disaster Mitigation Agency, showed people desperate for help, either for themselves or others trapped.

Rescuers struggled to extract seven people who were trapped under the rubble of a collapsed hospital. After several hours, an extractor came and rescuers were able to retrieve four survivors and three dead bodies.

The epicenter of the 6.2 magnitude quake was 6 kilometers (3.73 miles) northeast of Majene city and measured at a depth of 18 kilometers.

Thousands of people left their homes when the quake hit. They were evacuated to temporary shelters. 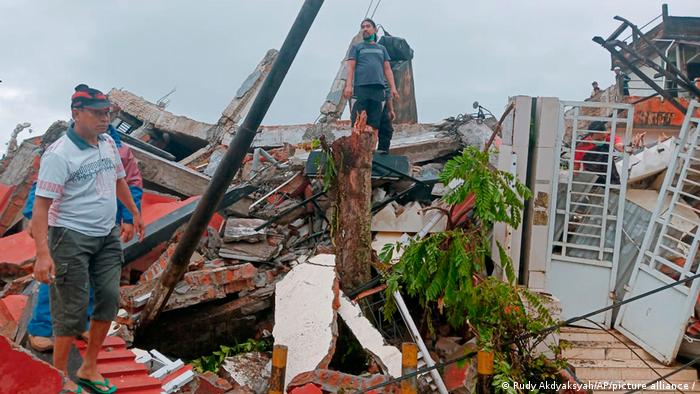 Many residents left their homes after feeling the earthquake

At least 60 homes have been damaged. A mall was also impacted, Sudirman Samual, a journalist based in Mamuju, north of the epicenter, told news agency Reuters.

The country's search-and-rescue agency earlier said at least one hotel had collapsed. It later clarified that the hotel had partially caved in.

Indonesia's disaster agency said a series of quakes in the past 24 hours had caused at least three landslides, and the electricity supply had been cut.

Hours earlier on Thursday, a 5.9-magnitude earthquake struck in the same district, damaging several houses but causing no apparent casualties.