As the government struggles to speed up its vaccination drive and ensure public adherence to hygiene and social distancing measures, the rapid spread of the virus threatens to overwhelm Indonesia's health system. 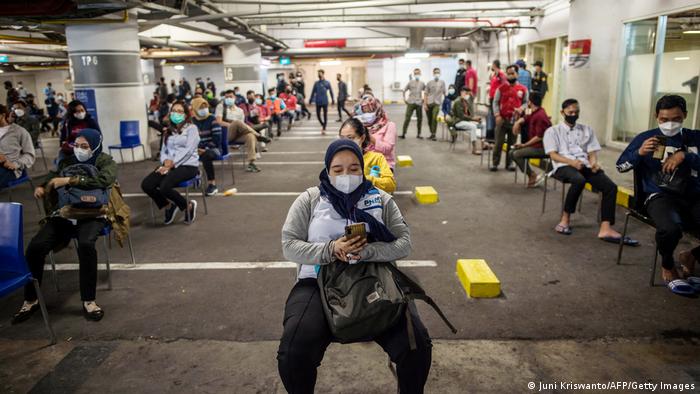 Over the past few days, Hendra, who goes by only one name, has been hearing ambulance sirens more often from the window of his home in Depok city, in Indonesia's West Java Province.

"The sound of an ambulance siren can be heard continuously every day," the 38-year-old journalist told DW, pointing out that it's due to the alarming rise in COVID cases in the region.

Hendra said his own brother and niece have contracted the virus and are now in self-isolation. Even though he has been warning his family and friends to take the health crisis seriously, only some of them have listened.

Others continue to deny that COVID is real and some among them appear to have already been feeling "pandemic fatigue" after over a year of living under health and safety protocols.

Hendra's concerns are not without reason. Indonesia has been witnessing a surge in coronavirus cases over the past few weeks.

The rise has been blamed on millions travelling across the Muslim-majority nation at the end of Ramadan, despite an official ban on the annual migration.

‘Wealthier' Indonesians travel to US for COVID jab

The Southeast Asian nation on Monday registered a daily record high of 14,536 new cases, taking the total to just over 2 million with nearly 55,000 related deaths, among a population of nearly 270 million.

But those figures are widely thought to be a vast undercount, due to low testing and contact tracing. Some experts have said that the official case count may only be about 10% of the real number.

With the number of infections rapidly rising and hospitals being flooded with patients, warnings abound that the crisis could spiral out of control and overwhelm the health care system.

Health Minister Budi Gunadi said in a recent press conference that about 90% of isolation beds for COVID patients in Jakarta have already been occupied.

Soaring cases have also been putting increasing pressure on the health system in other hard-hit areas like the Kudus district in Central Java Province.

As a result, exhausted doctors and health care workers have been urging the government to impose stricter measures to curb the virus' spread.

A number of factors have contributed to the worsening problem, including the lack of adherence to mask-wearing, physical distancing and other health protocols, as well as vaccine skepticism.

Airlangga Hartarto, head of the nation's COVID handling committee, said the government has been implementing a policy known as "micro-based community activity restrictions" from June 22 to July 5.

It will take effect in regions designated as "red zones," such as East Java, West Java and Central Java Provinces.

The restrictions mean that schools in these areas will only be allowed to conduct classes online. Restaurants, cafes and food stalls are allowed to operate, but only at 25% of their full capacity and just until 8 p.m. About 75% of workers from the red zones must work from home, according to the rules.

Hermawan Saputra, an epidemiologist and member of the Indonesian Public Health Experts Association (IAKMI), said that these restrictions would not be effective in slowing down the spread of the virus and breaking the infection chain.

He instead recommended tough curbs on public movement and social activity, including the suspension of air travel and inter-island transport, such as those implemented last year.

The World Health Organization (WHO) has also called for tougher movement restrictions.

The government has said it would temporarily tighten restrictions in the capital Jakarta and other hot spots but enforcement has been weak.

Like in other countries, pandemic-related restrictions have had a severe negative effect on the Indonesian economy. So, the government seems to be wary of taking anti-COVID measures that risk throttling economic activity.

Yet, Saputra told DW that "if the government delays (taking radical steps), we will endure more loss and it will be harder for the economy to recover."

Another epidemiologist from the University of Indonesia, Pandu Riono, said the new policy only looks good on paper, without clear guidelines on how to implement and supervise it.

Riono said that despite many warnings from experts, authorities have failed to put in place enough appropriate measures to control the health emergency.

He also criticized the government for its weak pandemic response and questioned its willingness to learn from previous experience.

Furthermore, he said public attitudes toward the health crisis have been bordering on "herd stupidity."

Riono described it as a stage when the COVID surge is caused not only by the character of the virus but also by human behavior such as underestimating the pandemic and ignoring health protocols like wearing masks, washing hands, maintaining physical distance and limiting mobility and social interaction.

The expert urged the government to speed up the inoculation program to reach herd immunity.

Indonesia aims to vaccinate at least 70% of its population, or about 181.5 million people, by April 2022. But the pace of immunization has been slow. Only about 12 million people have been fully vaccinated so far while around 23 million have received at least one shot of the vaccine.

And a number of severe cases in inoculated medical workers has also raised questions about the China-produced Sinovac jab, which Indonesia is heavily relying on to vaccinate its people.

Not the right time to send children to school?

In March, authorities in some regions decided to gradually allow schools to open and hold classes onsite for at least two days a week starting from July.

The move, however, triggered concerns among parents about the health and safety of their children.

"I'm so worried that I don't want to send my children to school. Let alone with the increasing cases. Not everyone is following the health protocols. It's also hard to tell my children to put their masks on properly and they don't like wearing masks," 31-year-old Retna Setyaningsih told DW.

Another parent Ita Yunita, 33, said that she does not really feel safe and is unsure about the implementation of health protocols.

The Indonesian Pediatric Society (IDAI) said in a statement that it's not recommending school opening during the pandemic.

Aman B. Pulungan, president of IDAI, said that children's bodies were different from those of adults and that most hospitals in Indonesia had no ICU beds designated for children.

Pulungan pointed out that confirmed COVID cases among children in the country were relatively high.