India′s new residence law triggers fury in Kashmir | Asia| An in-depth look at news from across the continent | DW | 04.04.2020 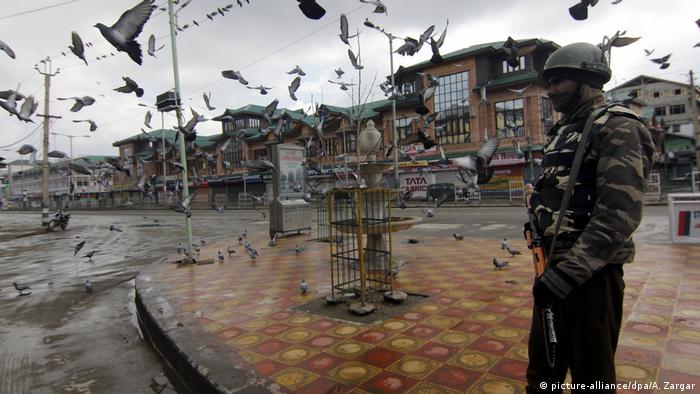 Prime Minister Narendra Modi's Hindu nationalist government has introduced a new set of laws for India-administered Kashmir, including a controversial domicile law which gives new rights for people from other parts of India residing in the territory.

Under the new law, those who have resided for 15 years or studied for seven years in the union territory of Jammu and Kashmir are now eligible to become permanent residents.

Those registered as migrants by the territory's Relief and Rehabilitation Commissioner are also eligible,  as are the children of central government officials who have served in Jammu and Kashmir for a period of ten years. Modi's government has authorized local revenue officials to issue domicile certificates.

Experts and human rights activists say that the new law has triggered fears of demographic changes and warn about renewal of tensions in the Muslim-majority Himalayan region.

Parvez Imroz, a human rights lawyer at the Jammu and Kashmir Coalition of Civil Society, told DW: "They (non-natives) will be the state subjects of this region, they can reside here, get jobs here, and also purchase land. All the rights that the natives had here will be given to them."

He warned that "with the passage of time, it will become a demographic change …  It may take a long time, but they (government) are doing it in a planned manner."

The new domicile law was announced as the region — like other parts of India — remains in complete lockdown due to the coronavirus outbreak. India's population of 1.3 billion people is currently dealing with a 21-day lockdown.

According to Imroz, New Delhi deliberately chose the timing of the law "so that there is no outcry on the streets."

"The whole world is busy with combating coronavirus and they are implementing these laws. They are confident that in this situation there will be no protest. The timing is very important," Imroz said.

The announcement came nearly eight months after Modi's government stripped Kashmir of its special status by abrogating a seven-decade old law that had protected the region from demographic changes as well as granted special land and work rights for native residents.

Subsequently, the region was split into two federally-administered territories. Modi had justified the decision in the name of development and progress.

The new domicile law means that more Indians are now able to apply for the already limited number of jobs in the region. Kashmiris already face grim job prospects and thousands of them are registered as unemployed with the government.

Altaf Bukhari, a pro-India Kashmiri politician who recently formed the Jammu and Kashmir Apni Party, told DW that he will continue to fight to safeguard jobs for local residents.

"This order is totally unacceptable," he said. "But there is no other way but to approach Delhi and fight for our rights. Our issues only have a solution with the central government."

In a recent meeting with Modi in New Delhi, Bukhari said he had been assured that the residents of Kashmir would be given certain safety nets.

Likewise, Noor Ahmad Baba, a professor of political science based in the region, said the new law "has come like a shock" as locals expected "something positive" from New Delhi regarding job protection and employment opportunities.

"What has come sounds like a joke," Baba said. "There is a strong rethink happening among those who supported BJP (ruling Bharatiya Janata Party) in Jammu. It is becoming clear it has tremendous risks for the youth."

Baba said that the new law "has definitely angered people" and warned it will have serious side-effects at both the local and global level.

The new law has been met with strong backlash for reportedly promoting senior-level jobs to people throughout India while reserving positions up to the level of non-gazetted rank for Jammu and Kashmir domiciles.

Zaffar Choudhary, a political analyst based in the region's southern city of Jammu, said that the decision has hurt the city's residents as they feel "cheated and humiliated."

"In many decades, this is one such decision by the government which has hurt Jammu the most, even for those who have supported all of the government's previous decisions," Choudhary said. "The job market is stressed out everywhere in India and by not opening senior jobs for everyone is discrimination," he added.

However,  Ashok Kaul, a local spokesperson for the BJP, defended the new law and rejected fears among the residents in the region. "These are being spread by the political parties involved in corruption over the years … Now those who are competent will get the jobs and there are no fears among people."

Under pressure from the Hindu-dominated Jammu region, the government has now brought small amendments to the law, reserving government jobs in the territory for residents of Jammu and Kashmir.

Despite further reassurance from India's Ministry of Home Affairs that the region's demography must and will be protected, Choudhary is skeptical.

"When thousands will come here for jobs, the fear of demographic change will become real … Those who get jobs today will get land tomorrow," he warned.

Kashmir cautiously optimistic as India turns the internet back on

While restored internet access following a seven-month blackout has offered hope for renewal, Kashmir's economy has taken a hard hit. DW spoke with Kashmiris about what comes next as the region goes back online. (10.03.2020)

Prime Minister Modi's alleged anti-Muslim policies have triggered mass protests in India. Liberal activists say that the South Asian country, once a beacon of secularism in the region, must not emulate Pakistan. (06.03.2020)