An Indian couple has called newborn twins "Corona" and "Covid" amid the country's lockdown. The names were meant as a reminder of the hardships of the delivery but also had a positive connotation, they said. 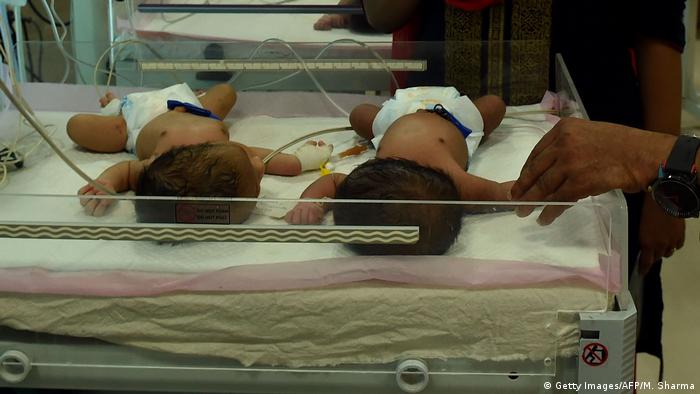 Two newborn twins born in the city of Raipur in India's central Chhattisgarh state have been receiving more than the usual share of attention after their parents named them "Corona" and "Covid."

The names for the girl and the boy, referring to the novel coronavirus and the illness it causes, COVID-19, were selected as India remains in a nationwide lockdown imposed in an attempt to stem the spread of the disease.

The mother of the children, 27-year-old Preeti Verma, told the Press Trust of India news agency that the names were intended by her and her husband as a reminder of the difficulties of the delivery amid lockdown conditions in the early hours of March 27.

She said she and her husband had been stopped by police several times on their way to the hospital, with road traffic also subject to restrictions. As an added difficulty, the twins were reportedly born by cesarean section.

Justifying the choice of the unusual names, Verma stressed that the pandemic had not had only negative effects, but had also encouraged people to think about sanitation, hygiene and other good health practices.

However, the couple reportedly said they might change their decision later and give their children other names.

With tension still rife in riot-hit areas of Delhi, online rumors of violence have kept the public on edge. Unrest spurred by fake news, however, is not unusual in India — and experts say it is difficult to combat. (11.03.2020)