Indian state elections - A referendum on PM Modi′s demonetization policy | Asia| An in-depth look at news from across the continent | DW | 06.02.2017

Five Indian states are electing new governments over the next few weeks. The votes will prove to be a key test of PM Modi's popularity, which has taken a hit due to his demonetization move. Murali Krishnan reports.

Indians went to the polls on Saturday, February 4, in the first two of five state elections that experts say are a major popularity test for Prime Minister Narendra Modi. The premier's approval ratings have dropped since his controversial move in November last year to scrap high-denomination currency notes, dubbed locally as "demonetization."

Weeks after Modi announced the drastic move to withdraw all 500- and 1,000-rupee notes from circulation, the monetary situation in Asia's third-largest economy has yet to normalize and most people across the country continue to face problems accessing cash for their daily needs.

The government has said the move will bring billions of unaccounted money into the formal banking system and clean India's economy of "black money," a term used in the country to refer to unaccounted, untaxed wealth.

But since the announcement, serpentine queues have lined up outside banks and ATMs of people replacing their rupee notes or making small withdrawals. And Modi's administration has faced sharp criticism over the slow pace of introducing the new notes, with banks running out of cash and ATMs having to be recalibrated to cope with the different sized bills - a process that is still incomplete.

A state election in India's Uttar Pradesh is being regarded as a referendum on Prime Minister Modi halfway through his term. Modi's BJP swept the state in national elections, but now faces a challenge. (11.02.2017)

The Indian economy's high reliance on cash only adds to the crisis. Furthermore, many in the South Asian nation lack proper access to banks and financial services.

The uncertainty caused by the shock decision has also led foreign investors to withdraw huge amounts of capital from the country and put it elsewhere. The resulting slide in the rupee has sparked speculation that the country's central bank may intervene to shore up the currency.

The state elections are being held against this backdrop. The five states, where the votes are taking place, are home to a fifth of the country's 1.25 billion-strong population. While the voters in the western states of Punjab and Goa cast their ballots on Saturday, polls will be held in Uttar Pradesh and Uttarakhand in the north and Manipur in the northeast between February 11 and March 8.

As predicted by political analysts, the demonetization controversy has dominated the crucial state elections. Opposition parties are trying to use the currency controversy to their advantage as the rural population in the states has faced the brunt of the premier's demonetization decision. In the states of Punjab and Uttar Pradesh, farmers are finding it difficult to buy pesticides for the winter crops.

"It is a serious issue as cash scarcity has affected vast swathes of India's rural hinterland. If the objective of the demonetization move was to target the rich, it has not been effective," Vinod Singh, a farmer from Uttar Pradesh, told DW.

The election in Uttar Pradesh is crucial for Modi given its enormous significance in Indian politics. Being the most populous state in the country, with over 200 million inhabitants, it elects the highest number of lawmakers to both houses of Indian parliament.

Modi's Hindu-nationalist Bharatiya Janata Party (BJP) won 73 out of the state's 80 Lok Sabha - the lower house of parliament - seats in the 2014 general election, a stunning performance that helped the party secure an absolute majority for the first time. 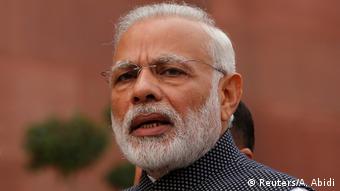 But it won't be an easy ride for the BJP in the state-level polls this time around, warn experts. The electoral alliance between the regional Samajwadi Party and the Congress party has given a boost to BJP's opposition.

In Punjab, the chances of the Aam Aadmi Party (Common Man's Party), an outfit campaigning against corruption, securing victory are pretty sound. Several polls following the weekend vote indicate that the party, which has a government in Delhi, could win the Punjab state election.

"It was an election of hopes. People have high hopes, and we will together fulfill those hopes," Arvind Kejriwal, the AAP chief, said after the vote.

If the BJP performs well in this crucial round of state polls, analysts believe it would be interpreted as an endorsement of PM Modi's policies. A defeat could force the party to reconsider its strategies.