Indian Premier Narendra Modi has arrived in Germany, where he opened the world's biggest industrial trade fair in Hanover - along with Chancellor Angela Merkel. Modi is hoping to woo potential investors. 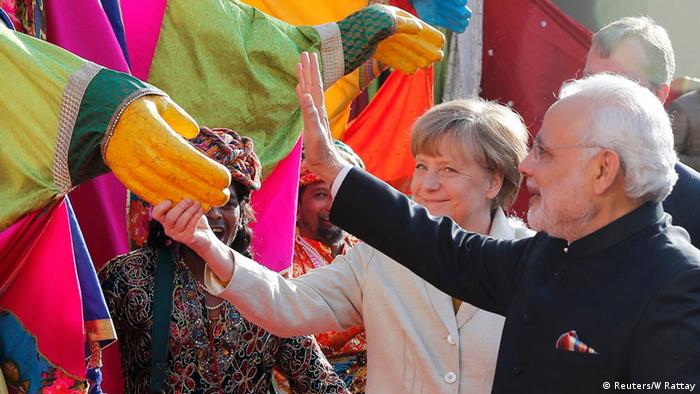 Ahead of the opening on Sunday, Merkel said: "Trade between Germany and India can be improved, although Germany is already India's biggest European trading partner."

India is the 2015 official partner country of the annual fair, which is open from April 13 to April 17 in Hanover. Some 6,500 companies from around 70 countries will be showcasing their wares in the northern German city.

Modi is seeking to woo German investors to India. His visit will include a tour of the fair on Monday, where he will meet with a delegation of German business leaders and hold talks with German Chancellor Angela Merkel.

Protests in Hanover ahead of Modi's visit

In Hanover, several NGOs protested against human rights violations in India ahead of Modi's visit on Sunday. The Society for Threatened Peoples criticized an increasing discrimination and persecution of religious minorities in India. A spokesperson of the organization said that Indian authorities did only deal with Hindu nationalists halfheartedly.

Airbus executives rolled out the red carpet for Narendra Modi on Saturday, showing the visiting prime minister the flagship A380, a plane that frequently flies to India but is not currently used by any domestic carrier.

On Friday, after arriving in France, Modi unveiled plans to purchase 36 French-built Rafale fighter jets, in a deal worth some 5 billion euros ($5.3 billion). India thus becomes the second foreign government, after Egypt, to sign up for the new fighters.

The Prime Minister of India, Narendra Modi, has arrived in France for his first visit to Europe. High on the agenda is a potential multi-billion euro deal for French fighter jets. (10.04.2015)