Two more states in India have banned the slaughter of cows and the sales of beef, with severe consequences for trespassers. The ban has stirred a heated debate in India on caste and religious tolerance. 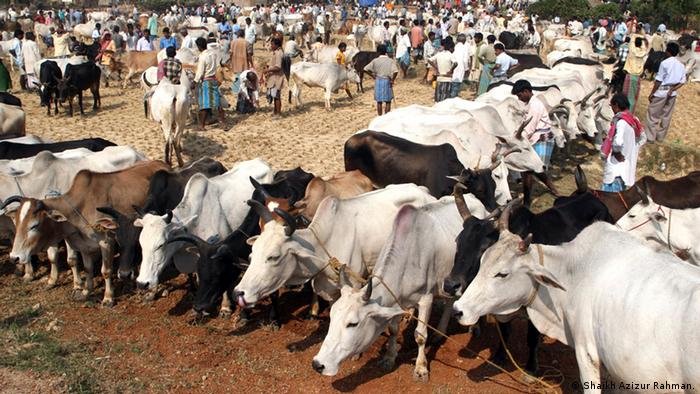 Haryana in northern India followed suit on Friday, after Maharashtra on India's west coast banned the slaughtering of cows. Those found guilty in Maharashtra would have to pay a fine of 10,000 rupees (around 200 euros) and could face up to five years in jail. Offenders in Haryana could be put in prison for up to ten years.

The extension of the beef ban has raised doubts that Prime Minister Modi's nationalist Bharatiya Janata Party (BJP) was trying to pacify religious sentiments of India's Hindu majority, which considers the cow holy.

The ban, however, became a subject of serious discussion after groups criticized governments for not taking into consideration the livelihood of hundreds of thousands of beef producers, including Hindus and Muslims. Maharashtra would lose nearly 150 million euros every year as a result of the prohibition.

The debate took on a new angle on Friday after petitioners Vishal Seth and Shaina Sen registered a case with the Bombay High Court saying the ban infringed upon their fundamental rights. "We are Hindus who are consumers of beef, which is now part of our diet and nutrition sources. The ban on beef and criminalizing its sale and possession violates fundamental rights of citizens," the Indian media reported the two as saying.

Lawmaker Derek O'Brien told the parliament how the ban would affect poor people.

Political scientist Kancha Ilaiah told Indian news website Scroll that the ban was an "attempt to impose upper caste culture on other Hindus." He was referring to Hindu Brahmins, who consider themselves the uppermost category in India's discriminatory caste hierarchy and are traditionally vegetarian in many parts of India.

Who's against the ban?

Selling and possessing beef is banned in many Indian states, including the national capital New Delhi and Prime Minister Narendra Modi's home state of Gujarat. Bull, bullock and buffalo meat is sold and eaten in several states where cow slaughter is banned, but a couple of regions ban the slaughter of cattle altogether. India's northeastern states have a sizeable Christian population and do not ban cow meat.

India's popular tourist destination Goa, with a large Muslim and Christian population, has refused to ban the meat despite having a nationalist BJP government. Similarly, communist leaders in India's southern state Kerala have announced a nationwide "beef festival" to raise awareness of beef dealers' problems.

The ban's humorous side

Twitterati and Indian cartoonists are practically having a party as far as the ban is concerned. The prohibition has spurred creative minds, like cartoonist Hemant Morparia, to come out with innovative ideas on how the ban would affect all living creatures in India.

Considering cows were so important for state governments, maybe milking would be banned too.

On the positive side, a cow costume could prevent rapes.

The Indian government has banned the broadcast of documentary "India's Daughter" over controversial statements from a rapist. The film highlights attitudes following the fatal gang-rape of a 23-year-old woman in 2012. (04.03.2015)

India nun rape: 'No religious angle to it'

The gang rape of an elderly Indian nun in eastern India has raised the question: was it a law-and-order incident, a result of communal tension, or simply gender violence? DW speaks to rights activist Saswati Ghosh. (20.03.2015)