The Indian government has banned the broadcast of documentary "India's Daughter" over controversial statements from a rapist. The film highlights attitudes following the fatal gang-rape of a 23-year-old woman in 2012. 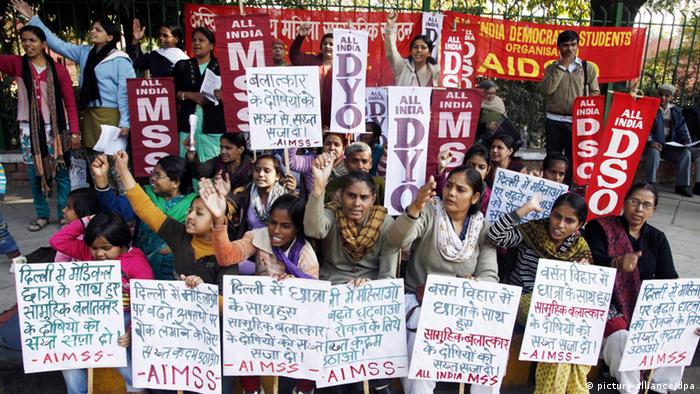 On Wednesday, New Delhi announced it was banning the broadcast of a documentary film called "India's Daughter" by filmmaker Leslee Udwin. The film highlights the increasing level of violence against women in India after a 23-year-old physiotherapy student was brutally raped in a moving bus on December 16, 2012.

"A court has passed (an) order prohibiting the publication and transmission of the interview till further orders," Rajan Bhagat, a spokesman for the Delhi Police said.

In his explanation for the ban, Bhagat pointed to an interview Udwin conducted with one of the five convicts, Mukesh Singh, saying he made "offensive and derogatory remarks against women, creating an atmosphere of fear and tension with the possibility of public outcry."

India's home minister, Rajnath Singh, told the Indian parliament that the film contained an interview of one of the five men convicted in the 2012 gang rape and that the comments were "highly derogatory" and an "affront to women."

"The government condemns it," Rajnath said.

Udwin's film was due to be broadcast on Indian television channel NDTV to mark International Women's Day on Sunday. The director said she was heartbroken by the ban.

Speaking to news agency AFP, Udwin said: "India is a country that values its rights and one of the most important of them is the freedom of speech, expression, and that needs to be upheld."

However, the rapist's interview has sparked a fiery debate in India about the manner in which the movie dealt with rape. At one point, Mukesh Singh says that the victim, known in the media as Nirbhaya, should not have been "roaming around at 9 o'clock at night" and that "a girl is far more responsible for rape than a boy."

Several lawmakers applauded the ban on Wednesday and even women's rights activists like Kavita Krishnan expressed serious concerns about the documentary.

Despite her disappointment, Udwin believed the move would only serve to generate more interest in her film.

"The more they try to stop the film, the more they are going to pique people's interest," she said.