India: Why medical students are taking their own lives

Some students who have taken the NEET medical entrance exam have killed themselves, alarming authorities in the southern state of Tamil Nadu. Entrants say the pressure is immense. 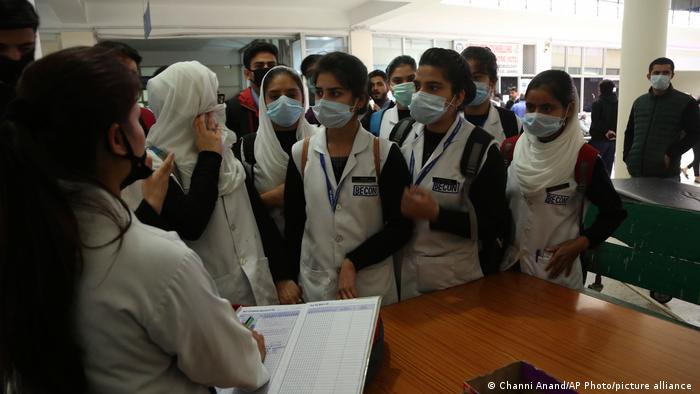 Many young people in India face extreme pressure to become doctors, and the stress does not end there

At what is meant to be the beginning of a successful career, Barnali took her entrance exam to become a medical student in India this year.

But the experience has been far from pleasant, as she explained to DW. "My parents are both doctors," she began. "So I have always felt pressured to take up medicine as a career. I don't think I will qualify this year."

She is not alone in a country that affords great respect to practitioners of the medical profession.

Students undertaking the entrance exam feel an immense amount of pressure from their families, educational institutions and society as a whole.

The NEET is a centralized exam conducted across India for students to qualify for the Bachelor of Medicine, Bachelor of Surgery (MBBS) course. It was introduced in 2013 and is mandatory for students before entering private and public medical colleges to study for the MBBS degree. On average, students taking this exam are aged between 17 and 19 years of age.

State authorities have been alarmed by the high number of suicides among medical entrance candidates. Tamil Nadu's Chief Minister MK Stalin mourned the deaths of students on Twitter.

The state has launched a helpline so students can access counseling over the phone and introduced a bill to scrap the entrance exam altogether, saying it will reduce the amount of pressure on students to perform well in a one-off assessment that determines their fate. The western state of Maharashtra is also considering scrapping the exam.

While the move is being considered as a positive one, many are worried it will only transfer the pressure to school academic performances. India has three different educational boards: the CBSE, ICSE, and the state board, with differing educational levels and grading parameters.

"Canceling the NEET is a good idea, but it is going to make the process of getting into colleges even more competitive, based on their final grades," Kimberley, a student who took the exam in 2019, told DW.

"The school boards have different levels of difficulty, so the competition seems unfair. On the other hand, it could be a good thing because rich and privileged students who can afford private coaching for the NEET have an unfair advantage," Barnali said.

Preeti N., a Mumbai-based counselor, told DW that students often suffer from anxiety and depression when it comes to highly competitive exams. "Students taking competitive exams, especially in a field like medicine, are often facing immense pressure from their parents, teachers and sometimes friends. To some of them, failure is not an option. Often, their lives completely revolve around exam preparation," she said.

Haunted by the sound of heart rate monitors

"In a system where the number of entrants is so high," she continued, "the chances of getting through are low. It can get quite suffocating. It is important to reach out to students and make them understand that there are going to be other chances, as well as alternative paths and careers."

Studies suggest those who do make it into medical colleges and work as doctors continue to face extreme stress throughout their careers.

A survey of 358 suicide deaths among medical students, residents and physicians between 2010 and 2019 showed around seven out of 10 suicides happened before the age of 30. Academic stress and financial issues were the causes listed as the reasons behind the suicides.

As these professionals go on to make up the health care system of the country, the study said this was a public health crisis and called for further research.

"Many medical students, residents and doctors lead a terrible lifestyle," said Preeti. "It is one of the most stressful professions of modern times and has become increasingly difficult due to the pandemic. Even doctors need their own private time and a work-life balance like the rest of us. Students begin by taking tough exams, but even once they pass the test, the stress in their life continues."

Thousands of impoverished families accuse private hospitals of overcharging them despite cost limits put in place by various state governments.

Even though a majority of Indians seem to have antibodies against the coronavirus, vaccination and COVID precautions remain the way out of the pandemic, experts say.

New insights in the battle against misinformation

Philip Mai and Anatoliy Gruzd are at the forefront of global research on social media. On #mediadev, they discuss their research on misinformation, their new portal, COVID19MisInfo.org, and the future of fact-checking.