COVID: High medical expenses take toll on poor families in India | Asia | An in-depth look at news from across the continent | DW | 05.07.2021

Thousands of impoverished families accuse private hospitals of overcharging them despite cost limits put in place by various state governments. 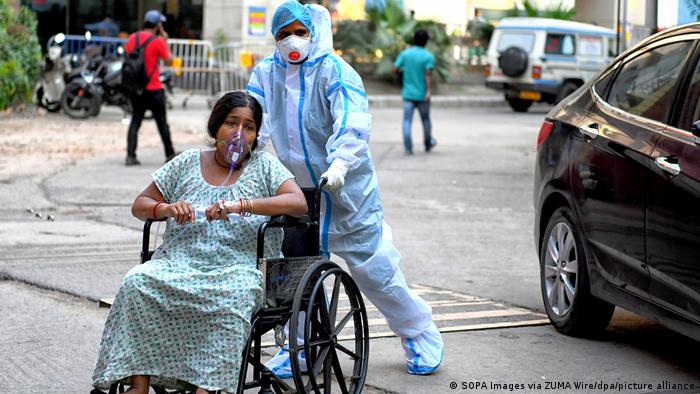 Anindita Gupta, a resident of the eastern city of Kolkata, said she had to sell some of her jewelry to pay for the treatment of her brother-in-law at a private hospital.

Her brother-in-law, who had contracted COVID-19, needed the support of an ECMO, which is used to pump and oxygenate a patient's blood outside the body.

At the end of May he was transferred to a private clinic from another hospital that didn't have the ECMO facility.

The family has sold their car to help meet the expense. Even if her brother-in-law returns home healthy, Anindita said the financial burden will weigh heavily on them for some time. "He has no idea of what has happened so far," Anindita said.

Anindita's family is one of thousands in India who have incurred high medical expenses during the nation's calamitous second coronavirus wave.

Spread of 'Delta Plus' variant in India worries experts

Complete data to assess the impact of the second wave on personal finances is still not available, but a recent report by the State Bank of India concluded that medical expenses could rise by as much as 11% on average for families because of COVID-related hospitalizations.

The judges said that "right to health included affordable treatment." They added that even if people recovered from COVID-19, they would find themselves in economic hardship.

In an effort to address the problem, several state governments have capped the amount of money private hospitals can charge COVID-19 patients. The government of Delhi introduced price caps last June.

Since the onset of the second wave, several states, including Tamil Nadu and Kerala have also capped rates. Some others, like Maharashtra, have revised their previous regulations to include fixed rates for some of the more expensive treatments.

Despite the measures, many hospitals continue to exploit loopholes to overcharge patients.

The All India Drug Action Network, an independent organization working to increase access to essential medicines, identified several instances of malpractices by private hospitals in Delhi.

The complaints include hospitals charging different rates for patients with insurance and charging separately for medicines or tests which should have been included in overall expenses.

A person who asked not to be named said that he had to pay money every step of the way to make sure his father, a COVID-19 patient, got the treatment he needed.

His father died in May. Even in death, there was little dignity, the son said. The private hospital in Kolkata his father was admitted to told the family they could either pay the hospital separately to take his father's body to the crematorium, or wait for staffers from the Kolkata Municipal Corporation, the local body responsible for providing basic amenities.

He said it cost him 14,000 rupees to transport his father's body to the crematorium, a 10-minute ride, after negotiations with the hospital staff.

In addition, the family had to pay extra money to speed up the process of getting a death certificate.

Millions pushed back into poverty

Such high costs have taken a severe toll on families across the country, but the poor have been the worst affected.

Anirudh Gaurang Gudlavalleti, a senior research associate at the Public Health Foundation of India, told DW that the rural poor face "double marginalization" since they are both economically and socially neglected.

He said there was a "huge lacuna when it came to availing medical services" because most of them could not pay out of their pockets.

While government-run hospitals don't have the requisite facilities and medical equipment, private hospitals are beyond poor people's reach, the expert pointed out.

The health emergency has also pushed many people back into poverty.

According to a research report published by the Azim Premji University, 230 million additional individuals had fallen below the national minimum wage poverty line between March and October last year.

Had the pandemic not occurred, around 50 million would have been lifted above this line, the study said.

Amid a devastating second COVID wave, India's high courts have stepped in to address the government's handling of the crisis. Multiple courts have issued orders in the face of a shortage of oxygen and vital medication.