India: Security forces kill civilians after mistaking them for insurgents

Soldiers opened fire on a truck they believed was carrying militants in India's Nagaland state, and then shot locals who came to protest the killings. 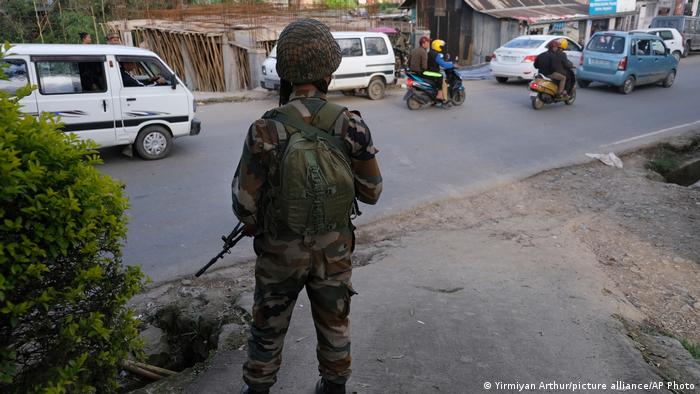 In this October 2019 file photo, a soldier stands guard in Kohima, the capital of Nagaland state where several ethnic insurgent groups are active

More than a dozen civilians were killed by Indian security forces in the northeastern state of Nagaland, government officials said Sunday.

The miners, who lived in a remote village along the border with Myanmar, were mistakenly believed to be militants as they returned from work.

Later on Sunday, villagers came to the army camp to throw stones and set fire to vehicles, according to a Reuters news agency source.

Home Minister Amit Shah said he was "anguished" by the killing in Nagaland's Oting village.

"I express my deepest condolences to the families of those who have lost their lives," he said, adding that an investigative team set up by the state would "thoroughly" probe the incident.

The top elected official of Nagaland state, Neiphiu Rio, offered his condolences to the victims' families on Twitter, saying the killings were "highly condemnable."

The victims were daily wage laborers who were returning home from a coal mine on Saturday evening in a pick-up truck when they suddenly came under fire.

They were ambushed by the army's commando unit that was taking part in a counterinsurgency operation.

The soldiers fired at the truck after receiving intelligence about a movement of insurgents in the area, an unnamed army officer told the AP news agency. Six people in the truck were killed.

Villagers angered over the killings set fire to two army vehicles in protest. The soldiers responded by firing at them, killing seven more people, the army officer said.

"There is a mob outside which is pelting stones," an anonymous security official as he is not allowed to talk to the press told Reuters news agency from the camp, which he said was surrounded by angry protesters.

What did the army say?

The army said in a statement that the unit was acting on the basis of credible intelligence of likely movement of insurgents.

"The incident and its aftermath are deeply regretted," the army said in a statement.

"The cause of the unfortunate loss of lives is being investigated at the highest level and appropriate action will be taken as per the course of law."

Indian security forces have been battling dozens of ethnic insurgent groups in the country's northeast, whose demands range from independent homelands to maximum autonomy within India.

New Delhi has endorsed a peace accord with the country's separatist group in its northeastern state, Nagaland. The rebel organization has been fighting for an independent ethnic homeland for Naga tribes.

The tribal Khasi community in India's northeast is famed for its matrilineal heritage. But men are increasingly complaining that the tradition has left them neglected and devoid of motivation.

India: Why violence keeps flaring up at the Assam-Mizoram border

Deadly clashes between the police forces of neighboring northeastern Indian states in July highlight the urgency to resolve their border dispute. DW visited the site of the bloody confrontations.