New Delhi has endorsed a peace accord with the country's separatist group in its northeastern state, Nagaland. The rebel organization has been fighting for an independent ethnic homeland for Naga tribes. 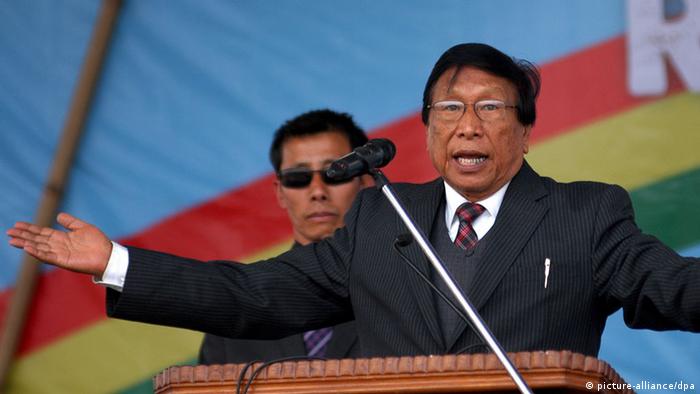 Officials from Prime Minister Narendra Modi's government and representatives of the National Socialist Council of Nagaland (NSCN-IM) met in New Delhi to sign a peace deal.

"We are making a new beginning today… 60 years is a long time of fighting, the wounds are deep," Prime Minister Modi said at a conference together with NSCN-IM's Secretary General Thuingaleng Muivah (pictured above), the rebel outfit's co-founder.

"Our oldest insurgency is getting resolved, and it is a signal to other smaller groups to give up weapons," Modi said at the signing ceremony at his residence.

"Since becoming prime minister, peace, security and economic transformation of the northeast have been among my highest priorities. It is also at the heart of my foreign policy, especially Act East," Modi said, referring to his latest plans for improving relations with neighbors in South East Asia.

The terms of the agreement were not immediately known, although the Modi government said it planned to develop the region, which consists of seven other states and has considered itself neglected by mainstream Indian society because of its different ethnic and cultural roots and geographical location.

The NSCN-IM has been fighting for an independent country for Naga tribes in Nagaland and its neighboring state Manipur, since Indian independence in 1947, and is one of the 30-odd separatist movements in India's northeastern part, bordered by China, Myanmar, Bangladesh and Bhutan.

Despite a ceasefire with the Indian government in 1998, no formal peace agreement has been made as yet. According to the South Asia Terrorism Portal, more than 170 people have died this year alone in Nagaland in terror-related incidents.

In India, Naga rebels have lifted their two-month blockade of the north-eastern state of Manipur. (15.06.2010)

North-Eastern Region Held Back by Insurgency

Many things have changed in India since 1947 but one part of the country remains largely unaffected by the changes otherwise noticeable in every walk of life -- the troubled North-Eastern region, which borders China, Tibet, Bhutan, Bangladesh, and Myanmar. (14.08.2007)