India will not send troops to Afghanistan, Defense Minister Nirmala Sitharam told her US counterpart James Mattis on Tuesday. It comes after the US had asked Delhi to boost its role in the region. 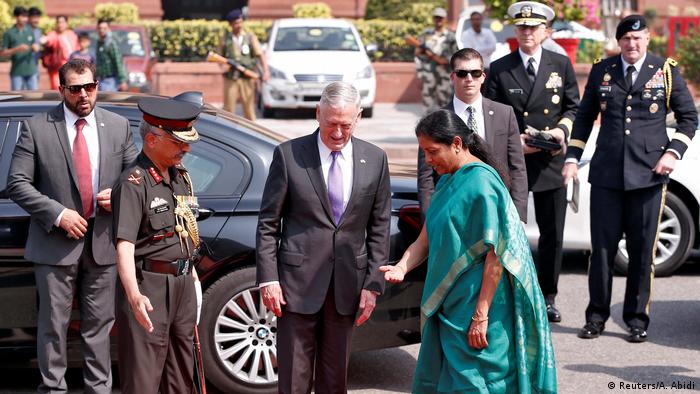 India on Tuesday put a damper on requests from US Defense Secretary James Mattis for "further efforts to promote Afghanistan's democracy, stability and security."

Defense Minister Nirmala Sitharam, who held a meeting with Mattis in Delhi on Tuesday, told Mattis that "there shall be no boots from India on the ground [in Afghanistan]."

"India's contribution to Afghanistan has been for a very long time, and has been consistently on developmental issues," Sitharaman said at a news conference with Mattis.

She stressed that India was prepared to increase training for Afghan security forces and boost help for infrastructure projects. India's "contribution has been on these grounds and we shall expand if necessary," she told a joint news conference after her meeting with Mattis.

India is competing with arch-rival Pakistan for influence in Afghanistan, building dams, roads and a new parliament there. Last year it offered some $1 billion (849 million euros) in aid.

It has also trained more than 4,000 Afghan National Army officers and provided helicopters to the Afghan Air Force.

The US had hoped for Delhi to play a bigger role in Afghanistan after unveiling its new strategy for the region last month.

Read more: How active are Indian jihadists in Afghanistan?

Both parties emphasized the need to combat terrorism with Sitharaman urging Mattis to raise the issues of alleged safe havens for terrorists in Pakistan with Islamabad.

"The very same forces which find safe haven in Pakistan are the same that hit at New York and Mumbai," she said.