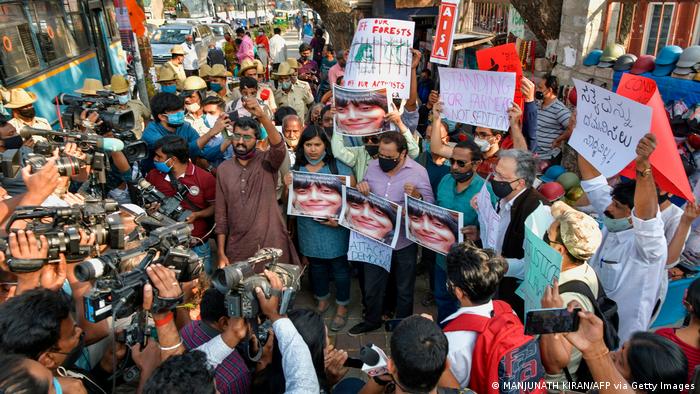 The arrest of Indian activist Disha Ravi over a pro-farmer toolkit has sparked outrage in the country.

Both of them face non-bailable charges for allegedly drafting a Google document designed to create and spread awareness about the ongoingfarmers' protests against agricultural reforms.

The "toolkit" was tweeted by Swedish climate activist Greta Thunberg earlier this month.

Who are the activists?

Delhi Police sought to detain Mumbai-based lawyer Nikita Jacobs, and her associate Shantanu Muluk, who both work with the Extinction Rebellion group.

"Shantanu was not found at his house. We are still searching for him... When the investigation team reached Nikita's residence, it learnt that she has absconded," said Prem Nath, a senior Delhi police official told reporters.

The crackdown comes two days after climate campaigner Disha Ravi, 22, was arrested by the Delhi Police in her hometown of Bengaluru for editing and circulating the "toolkit" that authorities say is anti-government.

Police said that the three activists created the toolkit and shared it with others for editing.

"The main aim of the toolkit was to create misinformation and disaffection against the lawfully enacted government", Nath said.

Police also said that the three activists were in contact with a Canada-based organization, Poetic Justice Foundation, which allegedly supports the Khalistani movement to create an independent state in Sikh-dominated regions of India.

They claimed the activists attended a Zoom call with one of the founders of the organization days before  Republic Day on January 26. During this call, they chalked out a plan to organize a "tweet storm" on the farmers' Republic Day tractor rally.

"There were around 60-70 people in this meeting. They discussed the modalities of Republic Day preparations. Following this meeting, a toolkit was made," a police officer was quoted as saying by the Indian Express newspaper.

"The arrest and the manner of arrest of green activist Disha Ravi shows clearly the intensifying Murder Of Democracy in India. But the young in India cannot be silenced. More power to them," said Jairam Ramesh, an opposition lawmaker and former union minister.

Delhi police said Rinku Sharma was killed in a quarrel at a birthday party, where the guests were all acquainted. But right-wing BJP supporters claim it was a hate crime.