India has struggled to enforce laws banning the unsafe practice. Under the new measures, sewer and septic tank cleaning will be mechanized, with funds directly transferred to sanitation workers to buy cleaning machines. 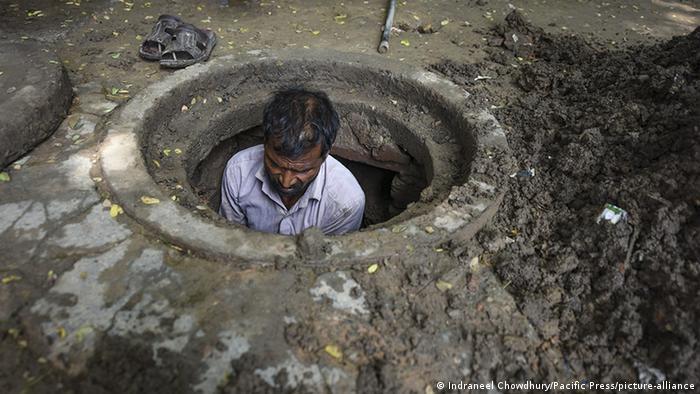 On Thursday, the Indian government announced a slew of measures to end the discriminatory and hazardous practice of manual scavenging by August 2021. Manual scavenging is the practice of removing human excrement from toilets, septic tanks or sewers by hand.

The measures are part of the Swachh Bharat Abhiyaan (Clean India initiative) launched by Prime Minister Narendra Modi's government — and seek to enforce laws that have banned the practice.

Under the campaign, sewers and septic tanks in 243 cities will be mechanized and a helpline created to register complaints if manual scavenging is reported. Cities which reach the end result will receive prize money.

Durga Shanker Mishra, the ministry's secretary, went a step further and announced that terminologies would be changed to support the government's decision to eradicate manual scavenging.

"We have instructed that the word 'manhole' is not to be used anymore and only 'machine-hole' is to be used from now on," said Mishra.

Meanwhile, the Social Justice and Empowerment Ministry said that it would directly transfer funds to 'sanitation workers' to buy cleaning machines, instead of contractors or municipal corporations.

"We want the workers to own these machines so that these can be used by the municipalities when there is a requirement," said R Subrahmanyam, the secretary of the ministry.

Outlawed, but with little impact

India began outlawing the employment of manual scavengers in 1993, expanding the law in 2013 — but little impact has been seen on the ground, as hundreds of people continued to be pushed into the profession.

Scavenging is mostly carried out by a sub-group of the Dalits, an outcast community also known as "untouchables" within India's ancient system of caste hierarchies.

"Untouchables" are often impoverished, shunned by society and forbidden from touching Indians of other castes, or even their food.

In 2013, India expanded the definition of manual scavengers to include people employed to clean septic tanks, ditches and railway tracks — but the practice continued.

Indian activist, Bezwada Wilson, told local news channel NDTV that the current move by Modi's government was a welcome step, but not much was known about the contents of the initiative.

"Who will receive the machines? Who will monitor? Who will be held accountable for the implementation? How will they give training?" Wilson said. "As far as I know, nothing has been worked out yet."

"The biggest issue is, the government has not yet identified the people involved in manual scavenging [...] Even though mechanization of sewer and septic cleaning is very much needed, the way this initiative has been launched seems to be a hasty act," he added.

The move also comes at a time when the Modi government is facing severe criticism for its treatment of Dalits, particularly following the recent death of a 19-year-old Dalit woman. The woman was brutally assaulted and gang raped by four four upper caste men in the state of Uttar Pradesh and later died in hospital.

At least 10 Dalit women are raped in India per day, and their vulnerability to rape has increased by 44% in the last 10 years, according to a report by the National Crime Records Bureau of India.

'India lacks the political will to end manual scavenging'

The Indian government banned manual scavenging in 1993 but the practice is widespread in the country. Bezwada Wilson, this year's recipient of the Ramon Magsaysay award, tells DW there is not enough pressure to end it.

Two children were beaten to death in central India for defecating in the open. The killings underline the violence sometimes unleashed to enforce Prime Minister Narendra Modi's flagship cleanliness drive.