India: Farmers′ protests give way to new independent journalism | Asia | An in-depth look at news from across the continent | DW | 16.03.2021

Disappointment with mainstream media's portrayal of farmer protests has given rise to new independent journalism. One group has introduced a grassroots, volunteer-run newspaper to cover the demonstrations. 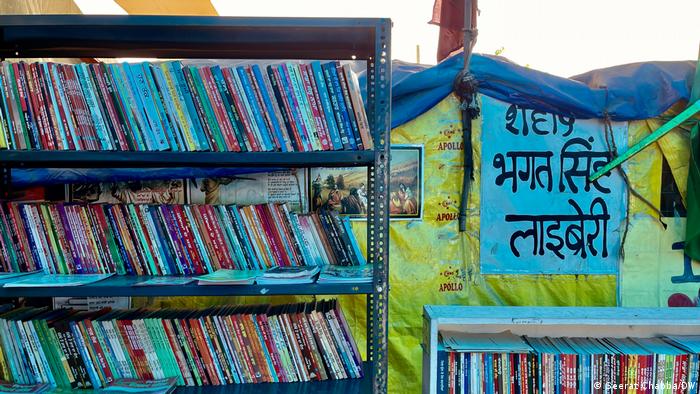 The Shaheed Bhagat Singh library is seen at Delhi's Tikri border, where protesting farmers have been camping for over 100 days

A small structure made of wood and sheets of tarpaulin sits in the middle of thousands of tractors and trolleys, stationed along the outskirts of New Delhi by protesting farmers.

The tent, which sits under a Delhi metro pillar, serves as the Shaheed Bhagat Singh public library and the headquarters of the Trolley Times, a grassroots newspaper run by a small group of volunteers.

"We strive to bridge the gap between the ground reality at protest sites and the politically motivated narratives peddled by mainstream media outlets in the country," a Trolley Times editor told DW.

Founded by a photojournalist, physiotherapist and a screenwriter, the newspaper arose from the need to offer stories from India's massive farmers' protests.

In September 2020, Prime Minister Narendra Modi's government passed three controversial agriculture bills aimed at liberalizing India's farming sector. While the laws were hailed as a watershed moment by the government, some farmers say the new legislation leaves them at the mercy of corporations.

After months of holding sit-ins in their home states, thousands of farmers marched to New Delhi following a nationwide strike on November 26. Over the next three months, they braved the cold and rain in temporary shelters outside of the national capital.

Initially, farmers faced a number of unfounded allegations: they were called secessionists and paid protesters, and were accused of being misled by opposition parties.

Many mainstream media outlets questioned their legitimacy with queries like: "How can they speak English? How can farmers wear jeans?"

The founders of the Trolley Times, who all hail from farming backgrounds, found these accusations insulting. The coverage of the protests seemed superficial. There were no stories coming out from within the demonstrations or about the people who were physically there.

"We had an advantage here — we were a part of the protest," editor and photojournalist Navkiran Natt told DW. "We knew the language that the farmers used — in this case, Punjabi — but we also knew English and Hindi, which allowed us to reach a wider audience."

While a number of niche media organizations were also seeking out stories, a lot was lost in translation. They did not speak the same language as the farmers leading the movement.

"Their primary platform is social media," Natt said. "But our audience is an old farmer, for whom media is synonymous with a physical newspaper." 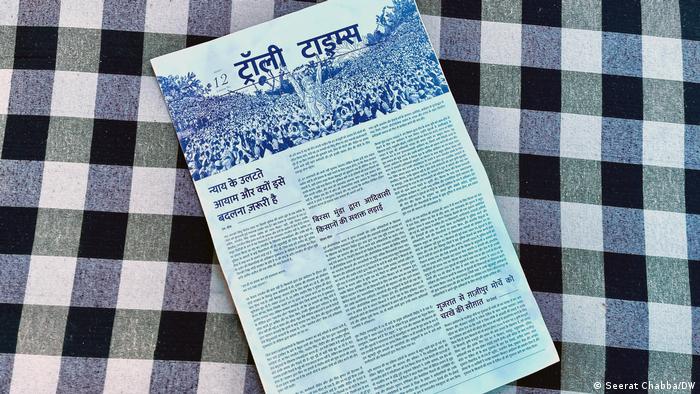 The Trolley Times is now published weekly, highlighting stories from each protest site

No one anticipated how large the protests would be. An old farmer told the founders: "We don't get to know what happens on the stage, what decisions are taken by the leaders."

One of them joked, "What can we do about this? Start a newspaper called the Trolley Times maybe?"

The Trolley Times, a newspaper run primarily by volunteers,  is now published weekly, highlighting stories from each protest site.

In addition to deep-dives into the political and historical context surrounding the movement, and profiles on protest leaders, the paper also handles elements often overlooked by the mainstream media, such as caste, class and gender, said editor Mukesh Kulriya.

Kulriya also takes pride in the bilingual weekly's design: When folded a certain way, the Punjabi segment comes first. When folded differently, the front page is in Hindi. The aim is to attract readers across different protest sites.

Starting with an initial 1,000 copies, the team now publishes 7,000 copies. They also upload PDF versions of the newsletter. Supporters convert the English translation into a number of languages, including Bengali, Marathi, Kannada, French, Portuguese and Shahmukhi, a modified Perso-Arabic alphabet used by Punjabi Muslims in Pakistan.

Sandeep Singh has over 30,000 followers on Twitter, who depend on him for day-to-day updates from the protest.

"I live at Singhu [the largest protest site], sleeping wherever I get the chance: a trolley or a tent. It depends on my luck that evening," Singh told DW.

"I am a Punjabi. I am a farmer," said Singh. "But most of all, I know the people who are protesting. I feel that it is my responsibility to get their truth into the world."

Initially, Sikh farmers from Punjab led the charge against the new laws. While farmers across the country have joined the demonstrations, a significant number of protesters on Delhi's borders hail from the northern state.

A road full of challenges

Sikh historian and independent journalist Amaan Bali has also amassed a following on Twitter, where he routinely provides historical context behind the protests, from the religious Sikh perspective.

One of the biggest challenges that independent journalists face is not having an accredited "press card," Bali told DW. "People don't talk to you because they don't know who you are."

There are also financial challenges, as the journalists aren't paid to follow the protests and the newspaper is distributed free of cost.

"Everything happens on our phones — the typing, editing, proofreading," Natt said. "We make mistakes, but we strive to be true to the stories we publish."

Bali said the movement is an incredibly important moment in Sikh history. "If we don't observe, report, and record the events taking place, someone else may control the narrative for the future generations."

Similarly, Singh says his primary identity as a farmer gives him insights that are missing from many of the larger organizations. "They don't understand the protesting farmer," he said.

On a recent trip to the Ghazipur protest site, a Times volunteer was approached by an elderly woman. She held out the newsletter and said, "Please read it out to me. This is our newspaper."