In US, Hollande excludes French ground intervention in Syria

The US and France must destroy the "Islamic State" together, President Barack Obama said at a press conference with visiting French President Francois Hollande. Both urged Russia and Turkey to talk, and to stay calm. 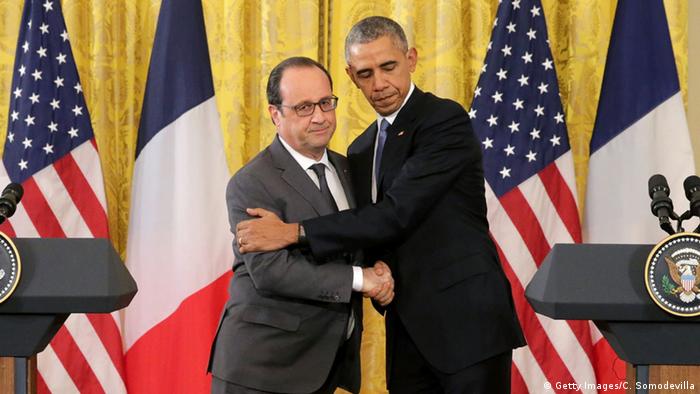 Francois Hollande met Barack Obama in Washington on Tuesday to discuss the fight against the so-called "Islamic State" (IS) terror group.

"France will not intervene militarily on the ground. It is for local forces to do so," Hollande told reporters at a joint press conference at the White House.

However, France will intensify the bombing campaign, and target IS command centers and "hearts of the cities" held by the terror group, according to the French president.

In addition, Paris will aim to cut off the militants' funding sources, he said.

Russia is "welcome" to be the part of the broad anti-terror coalition, according to Hollande, as long as Moscow focuses its strikes in Syria against IS fighters.

"I will urge president Putin, as I have done before, that the strikes must be against Daesh [an alternative name for IS], against terrorism and those who are threatening us," Hollande said.

"They are threatening Russians, like us in Europe," he added.

US President Obama said that Russian assistance in ending the Syrian war would be "enormously helpful."

However, he called Moscow an "outlier" in the fight against the IS.

During the joint appearance with Hollande, Obama also urged the EU to do more to share intelligence across the members' borders.

"As part of that, I'm calling on the European Union to finally implement the agreement long in the works that would require the airlines to the share passenger information to do more to stop the foreign terrorist fighters from entering our countries undetected," he said.

Obama also pledged to bring justice to the perpetrators and organizers of the Paris attacks, saying "We are all French" in president Hollande's native language.

"I want to salute the people of Paris for showing the world how to stay strong in the face of terrorism," he told reporters.

Obama also announced that US had prepared a plan to increase the pressure on the IS, even before the Paris attacks took place.

"We have seen some success (against IS), but the question is now - how we can accelerate it." Obama said.

Calling for calm between Moscow and Ankara

The two leaders also commented on the downing of the Russian plane earlier on Tuesday.

"Turkey, like every country, has the right to defend its territory and its airspace," Obama said. "It's very important right now for us to make sure that both the Russians and the Turks are talking to each other to find out exactly what happened and take measures to discourage any kind of escalation."

Hollande also urged calm, saying that an escalation would be "extremely damaging."

In addition, the French president called for the Syrian President Bashar al-Assad to step down "as soon as possible."