In Ukraine, a political power struggle comes to a head | Europe | News and current affairs from around the continent | DW | 04.07.2015

In Ukraine, a political power struggle comes to a head

Kyiv originally invited Alexander Kvitashvili of Georgia to come fix Ukraine's corrupt healthcare system. Now the government has unceremoniously thrown him out of office. The ecology minister has been forced out as well. 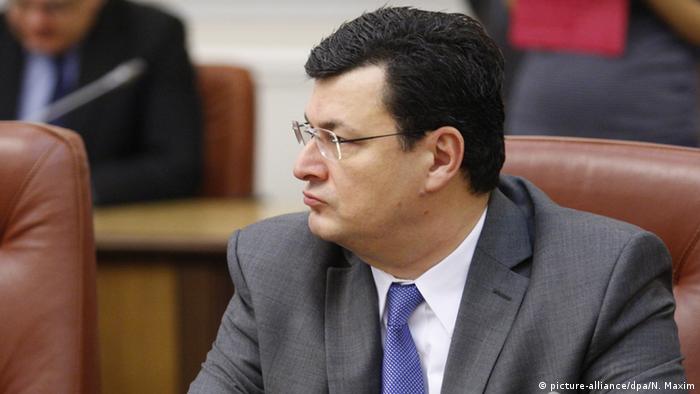 Seven months after forming a coalition government in Ukraine, Prime Minister Arseniy Yatsenyuk lost two ministers in the space of a day. The first to go was Ecology and Natural Resources Minister Ihor Shevchenko. According to the government, a flight from Nice to Kyiv in a private jet with a controversial businessman was what tripped up the 44-year-old politician. Shevchenko himself vehemently denies any allegations of corruption. He was fired on July 2.

Observers in Kyiv suspect that behind it all is a fight for political influence and access to natural resources, above all to natural gas. The Ukrainian media has described Shevchenko as having close ties to former Prime Minister Yulia Tymoshenko. She says that, although it participates in the ruling coalition in parliament, her party has no ministerial appointments. On Thursday, the influential Kyiv online news outlet "Ukrainska Pravda" wrote that, "the split in the coalition has become visible."

Departure of the great Georgian hope

The second departure created even more of a sensation: Alexander Kvitashvili of Georgia (pictured), one of three foreign-born ministers in Ukraine, was forced to step down from his post. On Tuesday, June 30, Ihor Kononenko, the acting parliamentary leader of Poroshenko's BPP alliance announced, "We don't have anything against the minister, but he can no longer lead this ministry." He went on to say that the situation in the health ministry was "uncontrollable." On Wednesday, Kvitashvili's compatriot and Georgia's former president, Mikheil Saakashvili, tossed more wood on the fire. Now governor of the southern Ukrainian region of Odessa, Saakashvili said, "I told him that it was time for him to go." Indeed, Ukraine needs an "aggressive man" to fight corruption. 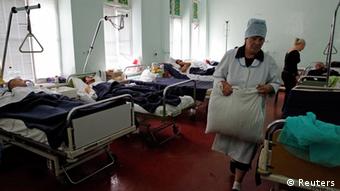 Kvitashvili was brought in to reform Ukraine's health system

On Thursday, the president's party tweeted that the health minister had turned in his resignation. But the ministry denied the claim. General confusion ensued in the media. It wasn't until later that afternoon that Kvitashvili explained that he had in fact vacated his post. "When the alliance that invited me here mulls my resignation without consulting me, then the right thing to do is to go," he told the press corps in Kyiv. Parliament agreed.

This resignation had enormous symbolic power. Just six months ago, Kvitashvili had been celebrated as a figure of great hope. He was invited to Kyiv to radically reform the health care system. The man who had successfully introduced a health insurance program with western standards in Georgia was asked to do the same in Ukraine. At the beginning of the year, Kvitashvili estimated that bribes were costing the Ukrainian health care system between 8 and 10 billion US dollars annually (7-9 billion euros) - three times the ministry's annual budget. "Doctors are simply stuffing this money in their pockets," railed the minister.

Kvitashvili did not manage to get much done during his brief tenure. He replaced all of the department heads in his ministry, did away with the opaque system of supplying medical drugs to state-run clinics and developed a plan for a fundamental overhaul of the health care system. He presented his plan to the government at the end of June. If and how it will be implemented is an open question after his de facto expulsion.

The dismissal of those two ministers is not the only sign of a rift within the governing coalition. Interior Minister Arsen Avakov and Defense Minister Stepan Poltorak have come under fire as well. At the end of June, caucus leader Yuriy Lutsenko said that the president's party had asked the government to look into allegations of corruption against both of the ministers. 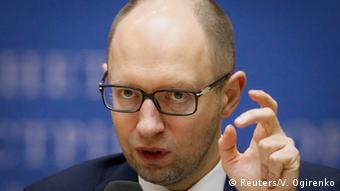 Lutsenko himself surprised everyone by also announcing his own resignation on Thursday. Long seen as a close advisor to the president, he is also his party's chairman. There is currently much speculation as to the reasons behind his resignation.

More than anything else, some observers see these recent developments as a power struggle against the backdrop of an increasingly dramatic financial situation. Ukraine's gross domestic product shrank 17.9 percent in the first quarter of this year alone, and similar numbers are expected for the second and third quarters. The National Bank of Ukraine estimates that annual inflation will be around 48 percent this year. The European Union and the International Monetary Fund (IMF) are not rushing to give Ukraine billions of euros in new aid. And the government in Kyiv is preparing itself for a possible national bankruptcy at the end of July.

These developments are all having a negative impact on the parties' polling numbers. Prime Minister Yatsenyuk's People's Front is being most affected. The party, which garnered the most votes in last October's elections, with 22 percent, now has approval ratings below five percent. If elections were held today they would likely not even make it into parliament. In contrast, the Poroshenko alliance, which came in second in October, would receive about 16 percent of the vote, giving it the most votes overall. Local elections are scheduled for this fall. The governing coalition in Kyiv should hold till then.

Mark Rutte's government is lobbying for the creation of a UN tribunal, which would prosecute suspects in downing of the Malaysian plane, officials have said. Most of the 298 victims in last year's incident were Dutch. (03.07.2015)

Russian rebel fights for 'our land' in Ukraine

Bound by a feeling of duty to the place he was born, Sergei left his family and comfortable life in Germany to fight with the pro-Russia rebels in eastern Ukraine. Kitty Logan reports from the front line. (02.07.2015)

How can international observers maintain their credibility in the middle of an armed conflict that is accompanied by an obscene propaganda war? OSCE observers talk about their mission during the DW Global Media Forum. (24.06.2015)