Russian scientists have doubts over whether global warming is here to stay and whether it's man made. But for the Saami in Russia's north, the mild winters already pose a threat to their traditional way of life. All around the Arctic, the effects of a temperature rise are visible, and native inhabitants of the tundras in Europa, Asia and North America are struggling with the new reality.

That's also true for the Saami reindeer herders on Russia's Kola Peninsula, an area bordering on Norway and Finnish Lapland. But, in Russia, climate change is not a hot-button issue, nor is much attention being paid to the upcoming climate summit in Copenhagen. Russian scientists say they have no evidence that global warming is a long-term trend, and doubt whether it is a man-made phenomenon.

In the country's northern port in the town of Murmansk, the Marine Biological Institute of the Russian Academy of Sciences monitors life in and around the Barents Sea. 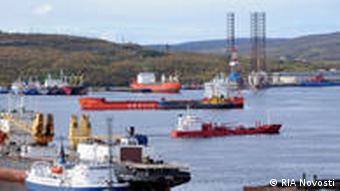 Murmansk is Russia's gateway to the Arctic waters

"In my opinion and that of our institute, the problems connected to the current stage of warming are being exaggerated," he says. "What we are dealing with is not a global warming of the atmosphere or of the oceans."

Makarevich expects a normalization of Arctic temperatures in the coming years. This view appears to have the support of a growing number of Russian scientists. Some even predict a temporary cooling of temperatures towards the middle of this century, a phenomenon known as a "Little Ice Age."

But for the Saami reindeer herders on Russia's Kola Peninsula between the Barents and the White Sea, a drop in temperature is urgently needed. Over the last few years, the winters have become milder and milder, threatening the traditional lifestyle of the Saami.

This year again, the onset of winter was late in northern Russia. Normally, the tundra would already be covered by a deep layer of snow, and the numerous lakes would have a thick layer of ice.

But snow cover is minimal and some of the lakes are not even frozen yet. For native reindeer herders, that's a problem, because the traditional slaughter season has to be postponed.

"The slaughter used to start in early November," says herder Nikolai Filippov. "At that time, the ice is usually strong enough to carry the reindeer. But over the past few years, the ice has been weak and sparse, so we cannot travel, and the slaughter has to be postponed until just before the New Year. This year, yields will be minimal."

Each fall, the big reindeer herds are somewhere on the vast expanses of the Kola Peninsula. At the onset of winter, they have to be found and driven to Lovozero, the center of the Russian Saami community. But that can only happen under true winter conditions. 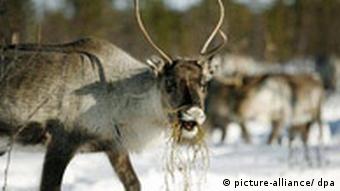 The indigenous Saami people depend on reindeer for their living

"Last year it was exactly the same. This year we do not know yet how the herds are, and what will happen later in the autumn," Filippov says.

"Sometimes it is still raining around the New Year, and you cannot go over bare ice with the reindeer. So then you will have to wait until after the New Year. In fact, the winter only starts in January. For now it is a mixture of frost and thaw."

The capricious weather has all kinds of practical consequences for the everyday life of the Saami. Nikolai Filippov and his wife Maria live in a chum, a traditional Saami tipi-like tent with a hole in the top to let out the smoke.

Maria used to prepare lots of food for the winter. But now that is out of the question, because the thaw often comes in the middle of winter and the meat can no longer be preserved. The tundra is no longer a reliable natural refrigerator.

"In the old days it never rained in December," says Maria Filippova. "When it rains in winter, the snow disappears and we can't move on with our animals to search for reindeer moss."

For thousands of years, the Saami lived according to an ancient and extremely reliable calendar. But today, says Nikolai Filippov, everything seems to be off course. For him, there is no question that nature is changing. What is happening in the tundra today is something the 59-year-old has never seen before.

The Arctic as a future trading route

The city of Murmansk, a few hours' drive to the north, seems a world away. In the harbor, there's the Lenin - the first Soviet nuclear-powered icebreaker built in the 1950s. Today, the heavy vessel is a museum. Andrei Smirnov was the Lenin's last captain when the ship was retired in 1989.

"No other country has boundaries like Russia that stretch so far to the North," Smirnov says. He is convinced that Russia will need icebreakers like this one, now and in the future.

"We have been using the northern passage since 1932. It is a sea route of national significance, and since 1991, foreign ships have also been allowed to use it. This year as well, foreigners have used the passage, and we have successfully guided them through with our icebreakers."

Smirnov is referring to ships belonging to the German company Beluga. Earlier this year, they made an impressive voyage from South Korea to Rotterdam, via the Arctic seas north of Russia.

This year, two ships from the German company, Beluga, completed the trip around Russia's north. The northern passage could become an alternative to existing routes

The trip was meant to prove that the North Pole ice is retreating as a result of global warming, and that the northern passage could become an attractive, much shorter alternative for existing routes like the one via the Suez Canal. It sounds great, but longtime members of Russia's Northern Fleet, such as Nikolai Babich, can only laugh at the thought..

"Saying that one could navigate in the polar seas without the help of icebreakers, or even reach the North Pole unhindered, no, that is not serious," says Babich.

Babich feels at home in the Russian Arctic. He has visited almost every corner of it during the last 40 years, and he claims there is no-one like him who has studied the area in such detail. The recent rise in global temperature has surprised neither him nor his colleagues. It has happened in the past, he says, and it will happen again.

"The natural processes we have seen during the past decade are mainly the result of the sun's activity. They show a slight increase in temperature, and as a result, Arctic ice has receded," he says.

But according to Babich, the situation is changing. The Arctic, he says, is already cooling, not warming. And the Russian government is attentively listening to those scientists who, like Babich, are predicting a cold spell.

Support for a delay proposed by Denmark, which will host a United Nations meeting on climate change next month, essentially lowers expectations for the summit and puts the focus on 2010 – or later. (15.11.2009)

In a move guaranteed to prevent filibustering, the government of the Maldives took their weekly cabinet meeting below the waves. The meeting highlights the Maldives' precarious situation due to rising sea levels. (17.10.2009)