Many scientists and governments are talking about what will happen once climate change begins to occur, but on the great island of Greenland global warming isn't just a future problem - it's happening now. 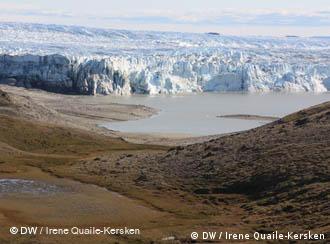 Some 85 percent of Greenland is covered in ice

Greenland is the largest island on the planet, and most of it - around 85 percent - is covered in ice. At over 1.7 million square kilometers (656,000 square miles), it's the largest area of fresh water ice in the northern hemisphere. Scientists have predicted that if the Greenland ice sheet were to completely melt, ocean levels could go up by seven meters (23 feet), which would have catastrophic effects for low-lying coastal regions across the globe. 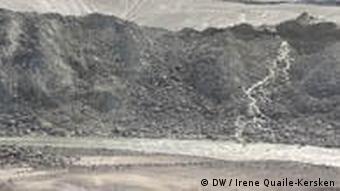 While scientists can't agree on how much or how fast the Greenland ice sheet will melt, what is certain is that the Arctic is warming up faster than the rest of the planet and that Greenland is already losing a large portion of its ice. As scientists continue to debate and take measurements, the effects of climate change are already visible on the island.

Ice as far as the eye can see

The boundary between land and ice is striking. At the edge, close to the moraine, ice is a dirty grey color. A half a kilometer on, it's sparkling silvery-white in the Arctic summer sunshine. This far in, the ice is approximately 250 meters thick, according to glacial guide Niklas, who didn't give his last name. In the middle of the ice cap, where the ice is deepest, it is 3.2 kilometers thick.

Around 10 years ago, the ice was 40 meters higher than today and the gravel road that leads here from the nearest town, Kangerlussuaq, ran up to the edge of the ice, Niklas said. He added that he isn't sure whether the decrease is a result of climate change, but since climate change has become a popular topic in the media, more visitors have been coming to Greenland.

Ice: A "hot" topic for scientists

One of the many visitors wanting to see Greenland's ice is Christine Hvidberg, from the ice and climate group at the University of Copenhagen. She normally works on ice floe modeling, but she's spending part of her summer at Kangerlussuaq organizing logistics for North Greenland Eemian Ice Drilling. 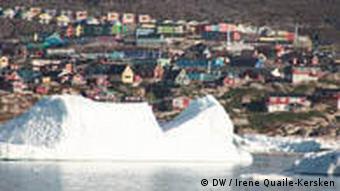 The international consortium that operates an ice core drilling camp three hours flight out onto the ice. The information gathered helps show what the climate was like in the past, which helps to make climate models for the future.

But the process involves extremely complex interactions and a lot of different factors, according to Hvidberg. Rising temperatures, for example, cause snowfall to increase which causes the ice sheet to gain in mass. However, it will also lose more mass because of melt in the summer.

"At the moment people believe that the Greenland ice sheet is losing mass, but still it's something we have to work on better to predict the future changes," she added.

One of the factors which still requires further research and inclusion in the models is the effect of ice streams. These are parts of the ice sheet that flow faster than the rest. The most famous example in Greenland is the Sermeq Kujalleq glacier, or "Jakobshavn," as it is still sometimes referred to in Danish.

That's where the ice is streaming very quickly - about one meter per hour - into the Jakobshavn ice fjord, where it breaks off as ice bergs. In recent years, the Sermeq Kujalleq glacier has retreated by some 15 kilometers.

While the scientists take advantage of the bright, arctic summer to work on their research, tourists also travel to Jakobshavn, or Ilulissat, as the town on the ice fjord is known these days in Greenlandic. They want to see the natural spectacle of a glacier calving ice bergs into the fjord.

Captain Ande Hofers takes small groups out to the glaciers on his boat, the "Pearl." He has worked on these waters for almost 40 years, and is quick to talk about the significant changes in the climatic conditions that are affecting his everyday life, especially in winter:

Hofers can remember a time just a few years ago when they used to be able to travel by dogsled to other towns with their football team or to other sporting events.

"We can't do that anymore, these days, we have to fly," he said. "We used to be able to cross the entire Disko Bay on our sleds to hunt in winter. Today we have to stay close to the coast. The ice is only stable for about a month."

Some see Greenland as a climate change winner. Less ice on the sea means easier passage for ships. It will be easier to look for oil and gas reserves and to mine minerals from the ground. 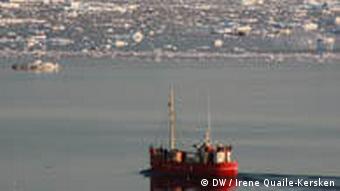 But not everyone views climate change from that point of view. Laali Berthelsen is one of the few Greenland-born guides working in the island's tourist industry, which still has a long way to develop. She said she has mixed feelings and puts the Greenlanders' dilemma in a nutshell.

"In south Greenland they have gardens and are starting to have small farms, so that's good because then they can have their own potatoes and stuff," Berthelsen said. "But Greenland is known to be the cold place where we have ice-bergs and bears and whales. I'm afraid we will lose all of that stuff that makes up our identity."

Sea level does not rise uniformly across the globe

The rise in sea levels is one of the topics delegates from 180 nations will discuss at climate talks this week in Bonn. Experts say even a minor increase in water levels will have a major effect on low-lying nations. (11.08.2009)

Follow DW's Ice Blog on a visit to Greenland's interior ice sheet and coastal glaciers. Hear from scientists monitoring climate change, its effects and implications for the entire world.