In paradise, battling hell in a sober house | World | Breaking news and perspectives from around the globe | DW | 16.02.2017

In paradise, battling hell in a sober house

To many, Zanzibar seems like a picture-perfect paradise. Yet heroin is endemic. Faced with international drug cartels, the government is struggling to stem the flow of drugs flowing into the country. 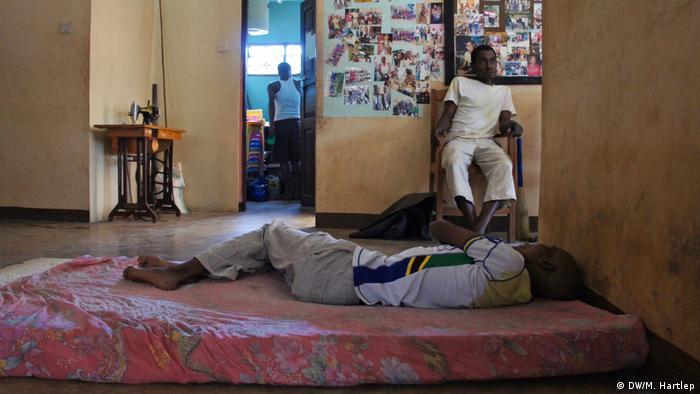 The pain, Hakim recalls, was relentless and brutal, as it seared through his body, gnawing at his resolve to battle on. "On my first day, I was like that guy over there", Hakim says, gesturing to a ghostly-thin man sprawled on a mattress on the floor.

It's hard to tell whether he's breathing.

Barely 18 days ago, Hakim, too, was lying in the same corner, pumped full of a cocktail of sedatives and sleeping pills, enduring the almost unbearable withdrawal symptoms of a heroin-addict gone cold turkey.

Hakim, a haggard, emaciated 51-year-old, whose Hawaiian-print shirt hangs loosely from his shoulders, his legs covered in scars and scabs, shrugs: Every of the 20 patients has experience the same hell, once they arrived at this small, Spartan recovery house, where addicts sleep five to a room on metal bunk beds.

Inside, hand-written, faded posters extol the addicts to follow the "12 steps of addicts anonymous." Another one chimes "Day by Day" and "Easy does it". 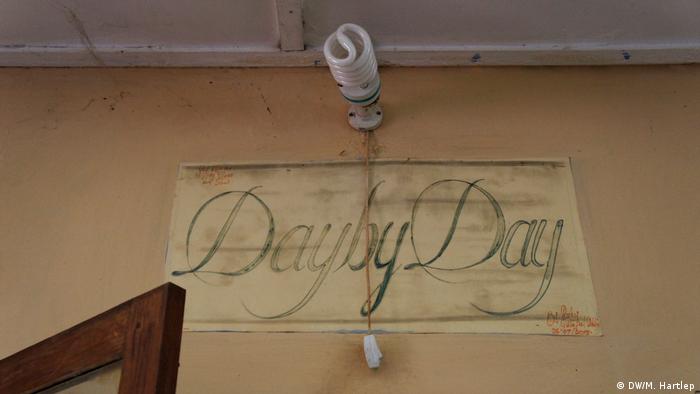 In Zanzibar, heroin is endemic

It's here, to this nondescript house, a short drive from Zanzbiar's capital Stonetown, tucked away behind a huge wall and surrounded by the gated homes of the East African island's middle class, that Zanzibar's most desperate turn for help: Those men - and often women, too - who saunter up to foreign tourists on the Zanzibar's picture-perfect beaches, their eyes blood-shot and glazed, sometimes begging, sometimes offering beaded necklaces, dolphin safaris – or a shot of heroin.

For in Zanzibar, the drug is endemic. Since the 1980s, East Africa - and in particular this small island - has been a major landing point for heroin shipped from Afghanistan to Africa via the Indian Ocean. But recently, there seems to be an even bigger surge, due in part an increase in opium production in Afghanistan.

Since 2010, heroin seizures have been on the rise – with figures ranging between 200 to 400 kilograms seized in a given year, according to David Dadge, the spokesman for the United Nations Office on Drugs and Crime. He concedes that it may be down to a better capacity of law enforcement agencies.

But, he confirms, anecdotal information does point to an increase in the use of heroin in Tanzania and particularly semi-autonomous Zanzibar.

Zanzibar is a transit route for the international drug trade

And many shipments continue to slip through: Zanzibar's coastline is porous, and isolated inlets and remote beaches provide an ideal landing spot for traffickers, who use the strategically located islands as a transit point. While much is shipped on along the Southern Route, as it is often referred to, to Central and South Africa and even Europe, a lot is feeding into a burgeoning domestic market.

After all, a joint of heroin mixed with marijuana is cheap: roughly one dollar, the equivalent of island's average daily income. It's hard to come by official figures – some media reports claim that as many as 7 percent of the 1.3 million people who live on Zanzibar and neighboring Pemba island may be addicted to heroin.

But the government contends that that figure is closer to one percent and points to a newly rolled out methadone program and public awareness campaign it initiated in schools. The twelve sober houses on Zanzibar and Pemba are run privately, relying on donations from international and domestic donors.

But despite these programs, one thing is for sure: tiny Zanzibar is struggling to fight the international cartels, Jumah Abdul Rahman Zidikheiry says. The smart, poised man with the confident air of a senior official, heads the island's Investigation and Drug Combating unit.

His agency, he says, is working very well. But the cartels use state-of-the-art technology. "Those guys they have bigger ships than ours, its very tough to deal with them." 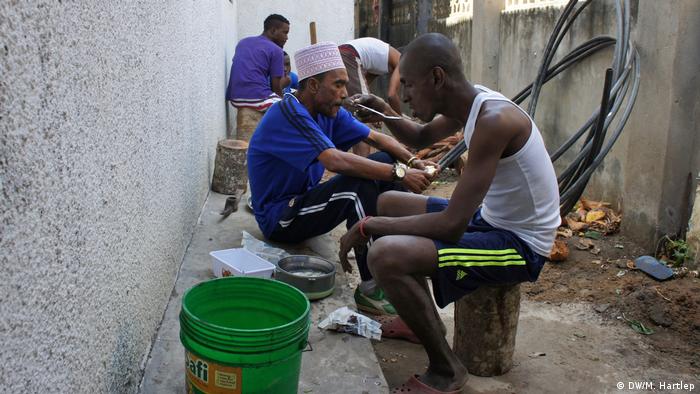 At the sober house, the patients cook their own food.

"The war on drugs is not an easy one"

And, they're armed, making the fight a lethal one.

"The war on drugs is not an easy war, it's not like fighting malaria. You get a mosquito net, a repellant – and you're done", Zidikheiry says.

Zanzibar, he adds, desperately needs international help, be it from the US or European countries. Because the drugs are affecting the country's economy - and tearing apart the social fabric.

Take Hakim: He lost everything. He used to work as a tour guide, taking foreigners to Zanzibar's beaches, spice plantations and organizing luxury safaris for them on mainland Tanzania. But eventually he lost first his job to his addiction and then his flat. Soon he living rough in Stonetown, after his family disowned him.

In predominantly Muslim Zanzibar, drug use is a taboo and addicts are often shunned. Many end up on the street, sharing syringes  - and deadly diseases: More than 40 percent of users are estimated to be infected with HIV and hepatitis is wide-spread.

"Some of my friends died because of me”, Nadjma Yussuf Zuleiman, stares down at her painted nails.

The pretty, shy 24-year-old, a blue shawl wrapped loosely around her slight body, first became addicted to heroin as a young teenager, when her brother, who worked as a mule, smuggling heroin from Pakistan to Zanzibar, introduced her to drugs.

"The first time, it was the best feeling in my life", she says.

But soon, heroin began to dominate her life: Married to a drug dealer, she and her husband would sell to men and women to pay for their habit, introducing many of their friends and acquaintances to drugs.

The price was high, she say: She lost many of her friends and even her own brother, who had first introduced her to heroin, to the drug. The details remain murky, but she's convinced that he was killed by police in Pakistan last year during his last drug run. 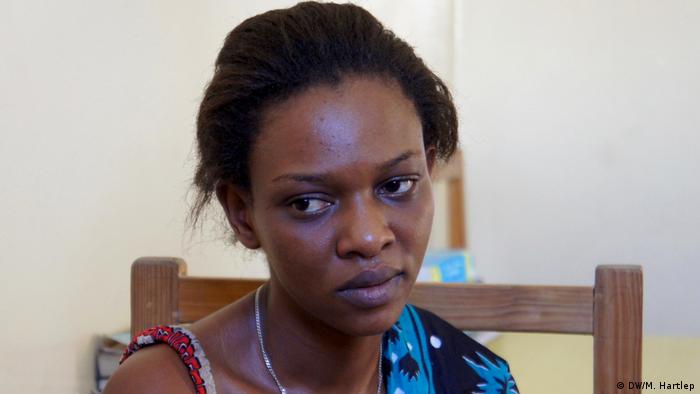 Nadjma: Used to work as a drug dealer to pay for her habit.

But in the end, it was her six-year-old son who made her decide to come to the sober house. He doesn't know she's addicted, she says, and she desperately wants him to have a better future.

It's her second stint at the recovery house, which caters exclusively for female addicts, many of whom have stories of abuse and prostitution to foreign tourists to pay for the next high.

For the relapse rate is high: Some forty percent of addicts manage to remain clean, according to the rehabilitation centre's manager, and many relapse several times in the process.

Hakim, for one, is adamant that he will stay clean and, somehow, manage to rebuild his life from scratch: he dreams of a new home, maybe even a girlfriend.

It's an uphill battle, but at least, he has a chance: unable to pay the modest fee of roughly 60 US dollars for the ten month treatment at the sober house, countless others are left to fend for themselves.