US President Obama traveled to Orlando to grieve with and comfort the survivors and the families of victims of the deadly mass shooting. He told family members "our hearts are broken too." 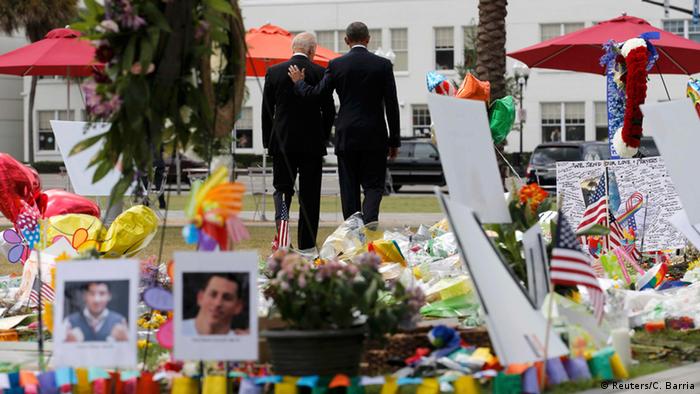 Despite hot temperatures, hundreds of people were at a downtown sports arena to see US President Barack Obama.

Obama said the families of the 49 people who were killed by a gunman in the Orlando nightclub were experiencing grief that is "beyond description" and added that they "could be our families" and "are part of the American family."

After the worst mass shooting in modern US history at the Pulse nightclub on Sunday, Obama said lawmakers need to "rise to the moment and pass gun control" and that the country's partisan debate on guns "needs to change."

Obama: 'We can stop some tragedies'

"The motives of this killer may have been different than the mass shooters in Aurora or Newtown," Obama said, listing two in the litany of mass shootings that have marked his presidency. "But the instruments of death were so similar."

Obama was condemned by US Senator John McCain, who said Obama bore responsibility for the shooting.

"Barack Obama is directly responsible for it, because when he pulled everybody out of Iraq, Al-Qaeda went to Syria, became ISIS, and ISIS is what it is today thanks to Barack Obama's failures," McCain said when asked about the gun debate prompted by the shooting, according to "The Washington Post."

McCain later said he misspoke and had intended to say Obama's national security polices were responsible for the shooting, not the president himself.

The gunman, who killed 49 people and injured 50 before being shot dead by police, 29-year-old Omar Mateen, was a US-born citizen to Afghan immigrants. He pledged allegiance to the "Islamic State" (IS) during his lethal rampage, and IS has claimed responsibility for the attack.

But other than his pledge of allegiance US officials have said they see no evidence the gunman was in communication with IS.

CIA Director John Brennan told a Senate Intelligence Committee hearing on Thursday that the agency had "not been able to uncover any direct link" between Mateen and foreign militants.

It was also the deadliest ever attack against America's lesbian, gay, bisexual and transgender community. Of those wounded, 23 remain hospitalized and six of them are in critical condition, according to Orlando Regional Medical Center.

The massacre has again raised the contentious debate over American's easy access to military-style assault rifles. The AR-15, which was used in last weekend's massacre, has also been used in other mass shootings in the US in recent years.

A new bone of contention between gun control advocates and their opponents is the revelation that Mateen, the gunman, was on the government's terrorist watch list not long ago, yet had no trouble purchasing an assault weapon capable of firing three rounds per second.

Gun control supporters have pointed out that those on the government's terror watch list aren't allowed to fly on commercial airplanes but are still legally allowed to buy military assault rifles - as Mateen did.

Now Democrats are pushing for a "no fly, no buy" amendment that would prohibit anyone on the government's watch list from purchasing an assault rifle.

There is, however, resistance to such measures among Republicans who control both houses of Congress and say stricter gun laws would infringe on Americans' constitutionally protected right to bear arms.

US President Barack Obama has made his most vehement attack to date on Donald Trump's anti-Muslim rhetoric. This after the presumptive Republican candidate's comments implying Obama was soft on "Muslim terror attacks." (14.06.2016)

Orlando residents are struggling to deal with the tragedy after a gunman killed dozens of people. Many are contributing money or donating blood to help the injured. Miodrag Soric reports from Florida. (14.06.2016)

Democrats in the US Senate held the floor for fifteen hours in a bid to force a debate on gun legislation. Republicans finally agreed to vote on the matter following the mass shooting in Orlando. (16.06.2016)