In Mexico, Trump inspires movement for political change | News and current affairs from Germany and around the world | DW | 14.02.2017

Donald Trump has inspired a renewed sense of national pride in Mexico. But some call it hypocritical, saying Mexicans should stand up against their own beleaguered president, Enrique Pena Nieto, reports Oscar Lopez. 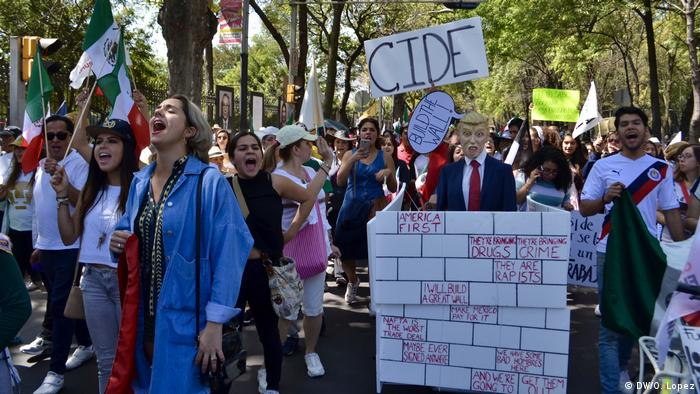 Marching behind an angry effigy of Donald Trump and his proposed border wall, Benita Quiros admitted that she had never been to a protest before. But on Sunday, the 46-year-old was among an estimated 11,000 other protesters waving Mexican flags and holding placards as they marched down Mexico City's Paseo de la Reforma. "I can't take it anymore," she explains. "We don't want a wall - we want to be free."

Mexico protesters call for respect from US President Trump

Rallies in about 20 cities across Mexico have denounced US President Trump's plans to build a border wall. Protesters say they're angry at the billionaire's rhetoric, which brands Mexicans "criminals" and "rapists." (12.02.2017)

A protest in Mexico over a 20-percent gasoline price hike has turned violent. Thousands were arrested nationwide in Latin America's second-largest economy. (08.01.2017)

Called Vibra Mexico (Mexico Moves), the march was organized by a coalition of over 70 citizen groups, universities and nongovernment organizations. According to Janet de Luna from the group Mexicans Against Corruption and Impunity, which supported the march, Vibra Mexico was convened to "reject the politics of Donald Trump and demand that our government fight the corruption that has left our people vulnerable."

Yet while organizers insisted the event was non-partisan, many protesters used the march to express their anger towards Mexico's own unpopular president, Enrique Pena Nieto: Some held signs reading "Get out Pena!" and "#FakePresident," or waved pictures of the president's face on the body of a donkey. Others counted slowly to 43 in honor of the students from the Ayotzinapa teachers college who went missing in 2014 and remain unaccounted for.

For Quiros, from a small town in the largely rural state of Oaxaca, while Trump and his attacks on Mexico brought her to the street, her real anger went much deeper. "People are hungry," she says. "And instead of providing jobs, politicians in Mexico just steal and steal. That's why people leave and go to the US." 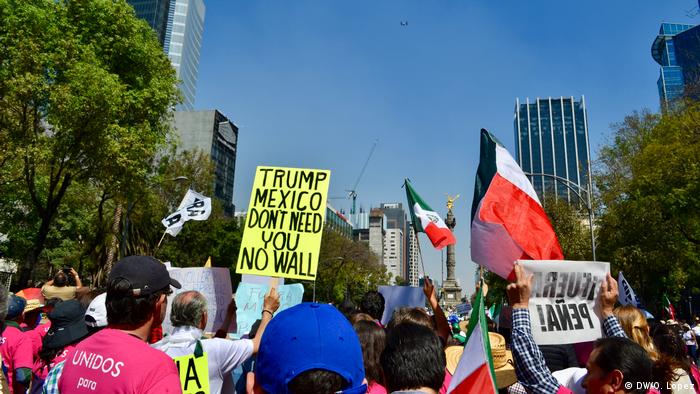 Anti-Trump sentiment has brought Mexicans together

In a country plagued by corruption scandals, human rights abuses and a struggling economy, Donald Trump has proved a catalyst for a growing socio-political movement against Mexico's own beleaguered president. "There's a vast feeling of indignation," says John Ackerman, an author and professor at the Institute of Legal Research at the National Autonomous University of Mexico. "Trump has brought Mexican people together in a way that doesn't always happen and synthesized them with equal force against Pena Nieto."

Ackerman sees the anti-Pena Nieto elements that emerged in Sunday's march as a continuation of a growing movement that was sparked by the Ayotzinapa disappearances in 2014 and was reignited by the so-called "gasolinazo" demonstrations, in which protesters took to the streets across the country last month to denounce a 20-percent hike in government-set gasoline prices. "It's led the country towards a breaking point," he says.

"We feel the pain together, the uncertainty, the rage," says Maria Garcia, who started the Bi-National Coalition Against Trump shortly after the American businessmen launched his bid for the presidency. "He has caused so much hurt against our community with his waves of racism." Garcia and her group have organized numerous anti-Trump protests and demonstrations, including the public bashing of a Trump pinata back in October.

For Garcia, who lived as an undocumented immigrant in the US, the greatest concern is for her friends and family still living there. Last week, immigration agents arrested hundreds of undocumented immigrants across the country, including an undocumented mother of two US-born children living in Arizona. "There is no act more cruel or painful than the separation of a mother from her children through deportation," says Garcia. 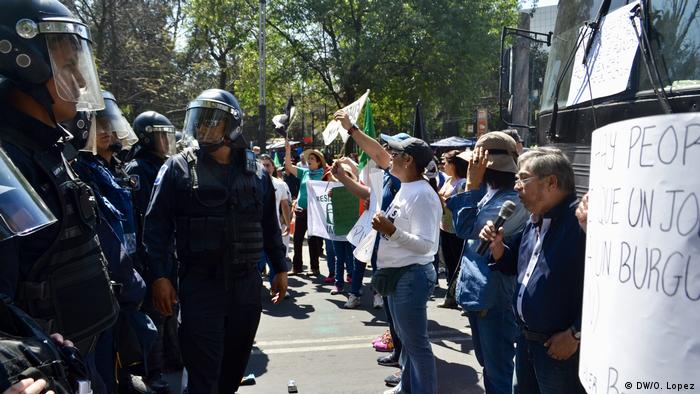 Yet she fears as much for migrants forced to return to Mexico as for those still in the United States. "We should be recognized as one of the main contributors to the Mexican economy," she says, referring to the $27 billion sent home by Mexicans living in the US in 2016. "Instead, we're treated as traitors." Last month, Garcia created the Front for Deported Mothers and Fathers to demand that Pena Nieto's government provide legal and financial support to those migrants that are deported back to Mexico.

'Leadership is not a hashtag'

Since Trump's election, Mexicans have also taken their outrage online with numerous memes, hashtags and videos circulating on social media. Jose Vazquez is a moderator of the Facebook page Mexicans to the Cry of War (a phrase taken from the Mexican national anthem). The page was launched not long after Trump secured the Republican nomination, and now has close to a quarter of a million followers. "His discourse of hate has hurt Mexicans and our dignity," says Vazquez. "But he has also reignited Mexican creativity." 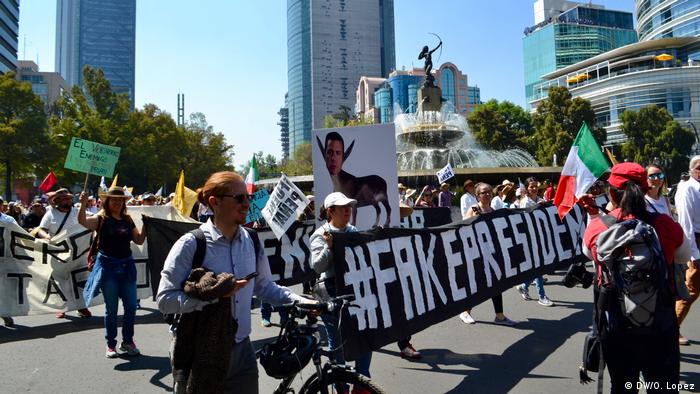 For Vazquez, the page has become a means for people to voice their criticism of the Pena Nieto administration and a rallying cry for social change. "The corrupt and greedy government of Enrique Pena Nieto has given Mexico and its riches away freely to foreign hands," he says.

Vazquez's group has joined a national movement to boycott American products and US companies: Last week, the hashtag #AdiosStarbucks or "Goodbye Starbucks" went viral in Mexico, calling on people to boycott the coffee chain. Meanwhile, a food-activist group launched a campaign called "Consumers, to the Cry of War!," calling on people to buy Mexican products and use consumer power to punish companies that support the new US government. "We want to exalt nationalism and urge people to consume what Mexico produces," says Vazquez.

For some, this kind of digital activism falls short. "There is no real leadership to this movement," says Emilio Lezama, a writer and political commentator. "Leadership is understood as a hashtag." Lezama fears that without a unifying vision, the movement inspired by Trump could easily flounder. "There is a folkloric idea of nationhood and national pride," says Lezama, "but it hasn't materialized into a true social, political project."

Lezama points to the division that the Vibra Mexico march inspired, with some activists and commentators arguing the focus on Trump was a distraction from the real problems facing the country. "Vibra Mexico backs Pena Nieto," says Vazquez, the online activist. "We repudiate the march and its organizers that drink from the government." For Ackerman, too, the march was an example of the Mexican government "using the Trump phenomenon to beef up its own legitimacy."

For some marchers, however, Vibra Mexico was just the beginning. "The country is realizing that the government doesn't work, that our governors are bandits and our lawmakers are rotten," says Luis Preciado, 75, who was marching on Sunday for the first time since the student demonstrations of 1968. "I know the task is difficult, but I believe in change."