A hospital in Ireland is among Europe's first to use robots to assist in gynecological operations. Proponents say the high-precision robots could revolutionize the way surgeries are done. But not everyone is convinced. 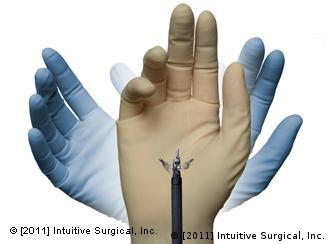 The Da Vinci robot has flexible wrists to perform surgeries

In 2007, the Cork University Maternity Hospital (CUMH) in Ireland performed its first robotic gynecological surgery. Impressed by the results, the hospital has since boosted the number of robotic-assisted procedures.

Since June, it's become the only hospital in Europe to use sophisticated robotics to perform both cancerous and benign procedures. Plus, CUMH has now become a demonstration site for doctors from around Europe to come and examine this new medical device.

The Da Vinci surgical robots, which are made by Intuitive Surgical, an American company, have up to four arms and flexible wrists. The arms also have miniaturized tools and cameras, which are mounted and controlled by human surgeons.

"The advantages of the robotic surgery over the conventional straight stick keyhole surgery is first of all the surgeon is seeing the view in a three-dimensional view so there is a sense of depth which you lose with ordinary keyhole surgery," said Dr. Matt Hewitt, consultant gynecologist at CUMH who uses the Da Vinci machines in everyday surgery.

The robotically-assisted procedure is similar to standard laproscopic or "keyhole" or minimally-invasive surgery, where instruments and cameras are inserted into a patient's body through small incisions.

The arms the part of the machine that are most recognizable as a robot, looking very similar to those that might be seen in a car factory.

Da Vinci has three remotely-controlled arms which rotate 360 degrees allowing surgeons more precision than they would have using their own hands, and the robot also has a fourth arm for the 3D high definition camera.

Other advantages of the robotic approach are more flexible instruments and direct control of the 3D camera view by the surgeon without having to rely on a skilled assistant. 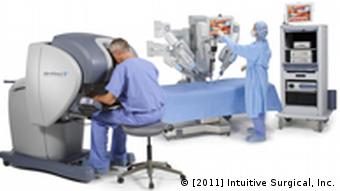 A surgeon can direct the robots from a computerized console

Robotic surgery advocates also say that the procedure also reduces natural tremors that even the best surgeons have, along with the ability to have a more sensitive control of the instruments.

The Da Vinci machines sell between one and two million euros ($1.4 to $2.8 million) each and are used for prostate and tumor removals, gastrointestinal and neurological operations.

While in surgery, doctors sit at a computerized console which looks like a cross between an arcade game and a puppeteer's workstation. A surgeon seated at the console can control the tools at the patient's side while viewing a 3D image of the operation's site.

Below the 3D screen, hang the manipulators the surgeon uses to connect the surgeon's hands to the instruments and a series of pedals that provide additional control.

The second part of the system is a tall cabinet, which contains the computers that drive the 3D visualization system.

No need of a skilled assistant

The third key piece of equipment is directly connected to the patient on the operating table.

"This is what we call a cart and that's the piece of equipment that holds the keyhole surgery instruments that are then going through the patient's abdominal wall and into the abdominal cavity and into the pelvis," Dr. Hewitt explained.

CUMH officials add that the Da Vinci robots fit well into its overall strategy of keeping hysterectomies and other procedures performed using traditional open surgery to a minimum. 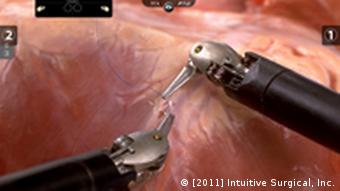 Traditional surgeries often mean long recovery periods for patients, a high risk of infection and can lead to other complications. Robotic surgery on the other hand usually offers patients shorter hospital stays, faster recovery times and leads to less pain and scarring.

The hospital also says it's easier to retrain surgeons skilled in the open method more quickly in robotic surgery than in manual keyhole surgical techniques.

But not everyone is convinced of the need to bring assistive robots into the realm of surgery.

Dr. Marty Makary of Johns Hopkins University recently published a scientific study on the claimed benefits of robotic surgery on hospital websites in the United States.

Dr. Makary says many of these US portals use material provided by the medical robot industry which overstates the advantages.

"We found that the claims are largely unsubstantiated with the science," Dr. Makary told Deutsche Welle.

"In fact, many claims we found were just outlandish. For example, ‘improved cancer outcomes,'" he said. "To simply imply that someone's likelihood for survival is increased or better with robotic surgery over standard minimally invasive surgery is just flat out misleading and dishonest." 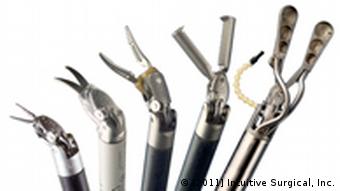 Dr. Makary also argued that there is little evidence that conventional keyhole surgery cannot achieve the same results as robotic procedures, and that the doctor cannot receive as much immediate haptic, or tactile, feedback from the body without actually touching it.

The American doctor has questioned whether the robot really is the best investment that a hospital or health care system can and should make.

But, the Irish government is making its own judgements, too.

Ireland's public health service, known as the Health Services Executive, recently commissioned a new assessment of the potential use of the Da Vinci device and its effectiveness.

While the Irish medical community waits for the results, many patients who have undergone the robotic procedure are all too happy to sing its praises.

"[My friends] were all shocked when they called to see me to see just the tiny little marks that I have," said Claire Orji, an Irish woman who had a recent robotically-assisted hysterectomy at the CUMH.

"And I felt great after just four days," she told Deutsche Welle. "I didn't feel I had an operation."

Scientists have developed a "plasmon ruler" capable of making 3D measurements on a nanometer scale. That could give them new insight into macromolecular and biological processes. (17.06.2011)

In a new scientific paper, European scientists have found a way to render more detailed images of the chemical composition inside a sample by using the X-ray from a synchrotron, a type of particle accelerator. (31.05.2011)