In Germany, you can send a letter to a tree - and get a reply

Even Chancellor Angela Merkel has reportedly written a letter to a chestnut near Dusseldorf, as have thousands of tree-lovers from around the world. Now the tree has been replaced, but the address remains the same. 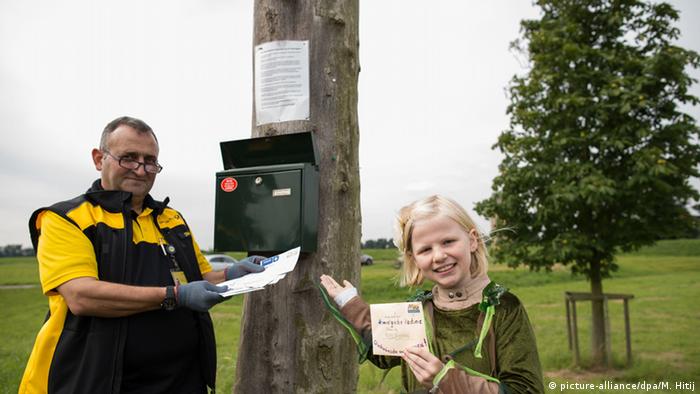 For years, a 150-year-old chestnut named "Jüchtwind" received letters from anyone who needed a listening ear - or branch.

Expressing concerns, love stories or the latest neighborhood gossip, some 6,000 letters were written to Jüchtwind. According to local letter carrier Ekrem Dönder, even Chancellor Angela Merkel sent a letter two years ago to the chestnut located in the Himmelgeist nature reserve.

Last winter, the chestnut fell ill and had to be felled. Starting Thursday, a new young tree will be accepting letters in its place, under the name "Erona." Those who write will even get a hand-written reply from Erona - that is, from 11-year-old local Leni Classen (pictured above).

Dönder told German news agency dpa that letters to the tree have arrived from as far away as New Zealand, China and Australia.

While the tree has been swapped out, the address remains the same:

According to the website representing the original tree, it held particular significance because local residents made great efforts to keep it from being cut down. Not only did the tree survive both World Wars, signature campaigns spared it from falling victim to various construction projects.

The Dusseldorf chestnut is not entirely unqiue. As DW reported, a tree in Melbourne, Australia, also receives letters.

They are some of the largest and oldest trees in Europe. To protect them, Germany's Ivenack Oak trees are getting a one-of-a-kind status. (04.08.2016)

School's out and work is slow. If they're not off traveling the world, here's where you'll find many Germans during the mild mid-year months. (08.08.2016)

She doesn't fulfill the stereotype of the blond German wine-grower in a dirndl - but she knows a lot about wine. Syrian refugee Ninorta Bahno is the first asylum-seeker to be crowned a wine queen in Germany. (03.08.2016)