John F. Kennedy called himself one, but what really makes a Berliner? DW's Stuart Braun drifts into a protest march in his adopted city and discovers that, here, outsiders can be insiders. 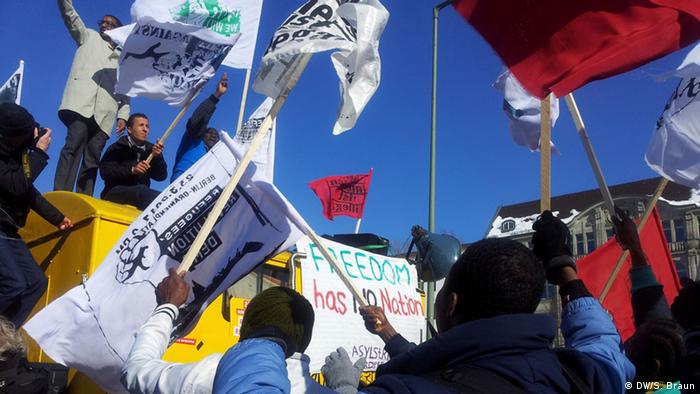 I'm soon marching alongside a man who is explaining racism in Germany and the death in custody of a man from Sierra Leone. I presume he's also from Africa, perhaps the Caribbean, but he says he's from Berlin.

"I'm from Berlin," he repeats, adding over the din of the rally that he lives here.

'Berlin came to me'

The anti-Nazi slogans and claims of systemic racism by the protest organizers - anarchists, leftists, African activists, Kurdish nationalists - are partly a response to revelations that a neo-Nazi terror cell has murdered nine immigrants across Germany in the last decade. The shouts, common in this still radicalized Berlin quarter, continue as the demo moves to Kottbuser Tor, a social housing death star where heroin once ruled and where döner shops and gay bars enjoy cheap rents.

The protesters scream, "Das war Mord!" (it was murder) in response to a roll call of immigrant deaths in custody. The man who walks with me knows the roll well. I still assume he came from Africa, but he says, "I didn't come to Germany; Germany came to me."

He wants to avoid being classified as an alien who broke into Berlin from beyond. "My point simply is that we are all equal."

I wander into this protest by chance, not for the first time, en route to pick up some repairs from my Turkish tailor. I easily go off on tangents in this city. It's a kind of rites of passage.

At these times I really see Berlin. I often understand why I came. And why I stay.

Like the recent, long-running refugee protest camps at Oranienplatz and the Gerhart-Hauptmann school in Kreuzberg. I would often pass on my bike, stop, take in the meaning of the "No one is illegal" signs. It seemed an old idea that all should have the right to be a Berliner.

Becoming a part of Berlin

Back at the protest against neo-Nazis, it suddenly hits me. As I march alongside this man, this activist, this seeming émigré, I realize that calling himself a Berliner is a strategy for liberation. It's an echo of John F. Kennedy's Ich bin ein Berliner speech uttered a few streets away in 1963, the notion that all who believe in freedom are citizens of the walled, besieged city of West Berlin.

This cliché somehow resonates half a century on: Berlin remains an island, a last refuge, a place of resistance and belonging for many different people.

I later find out that the man with me at the rally, Gaston, is the founder of an advocacy group named after the first university-educated African in Germany, Anton Wilhelm Amo. Gaston has also been harassed by police and threatened with deportation. When asked to confirm his national status, he simply replied that he was a "human being."

As the phalanx of protesters struggle against the frigid air, a bruising wind cannoning off gray housing blocks that mime Hitler's protean, still-standing concrete bunkers, I start to realize that, yes, Berlin also came to me. 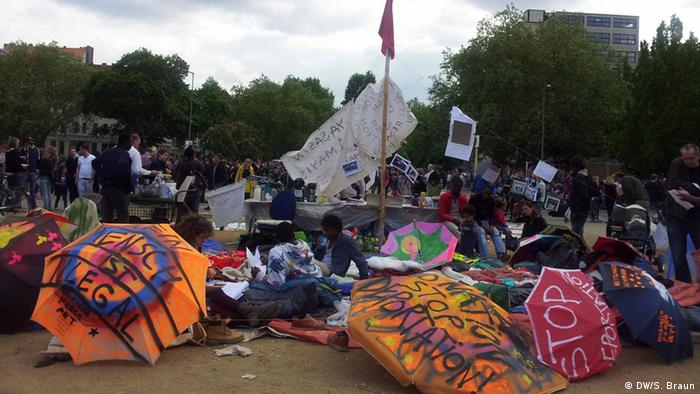 My story doesn't compare to those from Sierra Leone, Turkey, Palestine, Russia, Romania, Bosnia, Vietnam, some of the 190 nationalities that live in this part of Berlin - an area more ethnically diverse than New York, it's now said. But maybe each of us, in our way, remain in Berlin because we do not feel like outsiders who've breached the gates. Gaston is right. It's possible that the city came to us, that Berlin has made us a part of it.

Days after the march I stare out the window in my basic apartment with a shower in the kitchen, but grand high ceilings, still rented for peanuts in the rundown back house of a Kreuzberg tenement. I look to the window above, home of an aging couple: The man retreated from Poland to Berlin after the war. I peer below to the kitchen of a Sudanese man who came in the early 1980s.

Another window frames the lounge of two German women with a rainbow welcome sign on their door. A Turkish couple lives on the ground floor apartment, and beyond them is a Greek café that fronts the courtyard. My eyes rest on the yard, waiting for the Egyptian chef from the adjoining German restaurant to take his regular smoke break.

I'm feeling a little out of my depth as an Australian journalist writing a series of articles about foreigner communities in Berlin, about the Palestinian, African, Roma and Spanish Diasporas to this city. I've only been in town a couple of years. After my sudden appearance at the anti-fascist demo, it seems that no one is a foreigner in this city.

This Scene in Berlin column is an excerpt from Stuart Braun's book, "City of Exiles: Berlin from the outside in," to be published soon by Noctua Press.

Up-and-coming music stars are performing on the streets of the German capital. Berlin Music Week hopes to draw music lovers and industry insiders in a city oversaturated with talent. (03.09.2014)

How street art hopes to save the world

Charities and advocacy groups are working more and more with street artists to help create innovative and unique campaigns. Uniting the two is a common cause: fighting for what they believe in. (22.08.2014)