Ilkay Gündogan has agreed to a transfer to Manchester City, ending his five-year stint at Borussia Dortmund. The German international is currently recovering from a knee operation that has ruled him out of Euro 2016. 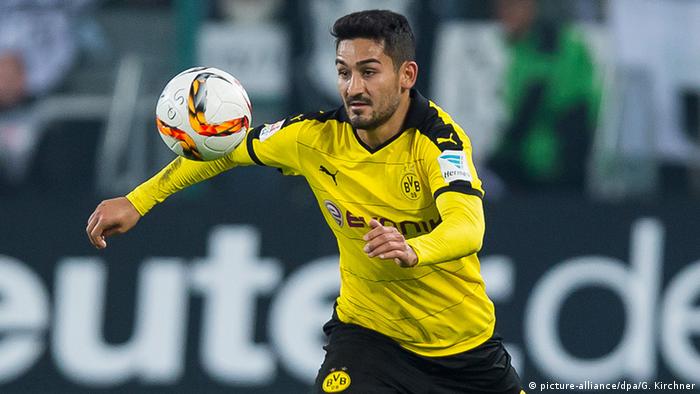 Borussia Dortmund have announced that they have sold Gündogan to English Premier League club Manchester City. The 25-year-old midfielder has signed a four-year contract until June 2020 with the "Citizens."

"I'm thrilled to have signed for Manchester City," Gündogan said in a statement released on Manchester City's website. “When I learned of City's interest my heart was set on coming here, and things have moved very quickly."

British broadcaster Sky Sports has reported that Dortmund would receive a transfer fee of £21 million (27 million euros, $30 million), but this has not been confirmed by either club. The German international becomes the first signing for Pep Guardiola as Manchester City's new manager.

"The opportunity to work with a coach like Pep Guardiola is something I am really looking forward to, and I am flattered to be the first signing the Club has made this summer," Gündogan said.

Gündogan will end a five-year stint with Dortmund after joining from Nuremberg in 2011. He has scored 15 goals and recorded 21 assists in 157 appearances with BVB. He helped the club win the domestic double in 2012 and reach the Champions League Final in 2013.

Gündogan is still on the mend after undergoing an operation to repair a dislocated knee. The injury will cause him to miss the European championship, which begins on June 10.

When Gündogan will be able to make his Manchester City debut is still unclear. The midfielder has missed 23 games for Dortmund over the past two seasons after returning from a back injury that kept him out of action for the majority of the 2013-14 season.

Gündogan is the second player that will leave Dortmund in the summer transfer window after Mats Hummels agreed last month to move back to Bayern Munich.

Ilkay Gündogan is widely expected to leave Dortmund this summer, but Thursday’s performance in the Europa League against Tottenham suggests Thomas Tuchel may have already figured out how to replace the 25-year-old star. (11.03.2016)