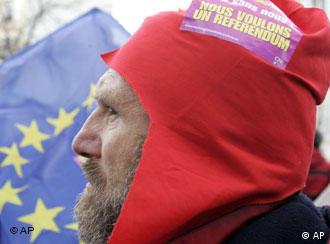 The public wanted a referendum, but didn't get one this time

Both the National Assembly and Senate voted resoundingly in favor of what is now known as the Treaty of Lisbon, a tailored-down version of the ill-fated constitution that was consigned to oblivion in French and Dutch referendums in 2005.

It is now to be formally ratified by President Nicolas Sarkozy, who played a leading role in drawing up the new text.

France will be the fifth EU country -- and the first major EU power -- to ratify the new treaty, which must be approved in all 27 member states before it can take effect as planned in 2009.

France's Europe Minister Jean-Pierre Jouyet described it as a "historic moment" opening a fresh chapter in France's relations with the EU as it prepares to take over the six-month presidency of the bloc in July.

"This is excellent news, a great victory for France which has gone from being the country holding up Europe to being the one that pulled Europe out of gridlock," said Sarkozy's spokesman David Martinon.

Crucially, the public has had no say in the decision -- even though recent opinion polls show that 58 percent want a plebiscite on the new treaty.

But rather than risk a second referendum, Sarkozy insisted the new treaty be ratified by parliament.

His refusal to submit it to popular scrutiny has fuelled anger across opposition ranks.

The main opposition Socialists split over the 2005 EU referendum when a rebel faction defied party leaders to campaign for a "No" vote, and the new treaty re-opened many of the old wounds.

A breakaway group of Socialist deputies joined the far-left and a handful of right-wing sovereignists in voting against the treaty on Thursday, while a small number boycotted the vote entirely.

But most of the Socialists joined the ruling Union for a Popular Movement (UMP) and its centrist allies in back the bill authorizing Sarkozy to ratify the treaty, which was adopted in the National Assembly by 336 votes to 52 against.

The Senate voted early Friday by 265 to 42 to approve the Lisbon treaty, with most Socialists lawmakers again joining their ruling party counterparts.

The French parliament held a special congress of both houses Monday to amend the constitution, deleting an obsolete reference to the doomed draft EU constitution, to allow the new text to enter French law.

Like the rejected constitution, the Lisbon treaty proposes a European foreign policy supremo and a permanent president to replace the six-month rotation system.

Aimed at preventing decision-making gridlock in the expanding organization, the charter cuts the size of the European Parliament and the number of EU decisions which require unanimous support, thus reducing national vetoes.

It also includes a European charter of fundamental human and legal rights, which Britain and Poland have refused to make binding.

However it drops all references to an EU flag or anthem which had fanned euroskeptic fears of another step towards a federal Europe, and no longer cites unbridled competition as a goal for the bloc. 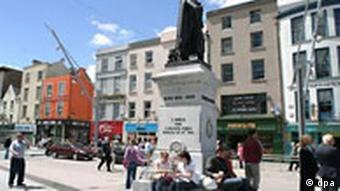 Ireland will be letting the people decide

Hungary was first to ratify the treaty in December, followed by Slovenia and Malta late last month and Romania which ratified the charter this week.

Slovakia's parliament was seeking on Thursday to agree on the text, while many other countries have yet to set a date for its adoption.

Germany plans to ratify the treaty by June while others such as Sweden, Spain and the Netherlands are expected to follow suit later in the year.

British Prime Minister Gordon Brown has been forced to fight off demands for a plebiscite, which most commentators believe would scupper the treaty's adoption.

Only Ireland is constitutionally bound to put the new text before the electorate in a referendum.

Both houses of the French Parliament voted on Monday, Feb. 4, in Versailles to approve a revision of the country's constitution necessary for a ratification of the new EU reform treaty. (04.02.2008)

Leaders Commit to EU's Future by Signing the Lisbon Treaty

After a long and painstaking road, the EU has a new roadmap into the future. But while the Lisbon Treaty hints at a future of cooperation, one absent leader reminded all that old habits die hard. (13.12.2007)

Throughout 2007, the EU struggled to salvage its derailed constitution. Come year's end, however, the 27-nation bloc can look back on some successes, the biggest one being the deal on its roadmap for the future. (25.12.2007)

Do you think France should have held a referendum? Send us an e-mail, including your name and country of residence.