Markus Eisenschmid scored in overtime to give Germany their first victory over Finland at the IIHF World Championship in 25 years. Germany's next opponent in Denmark is Canada. 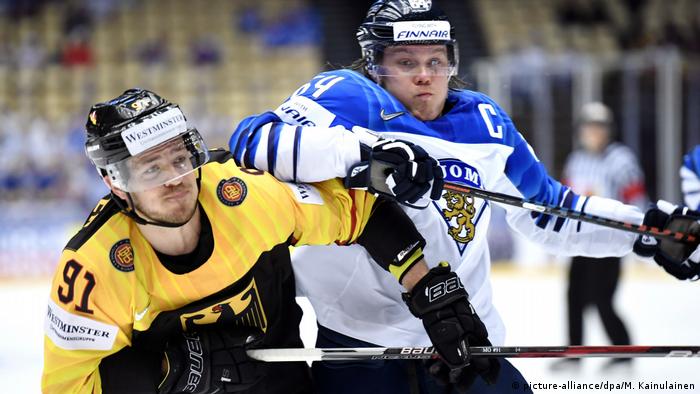 Markus Eisenschmid scored two minutes into overtime on Sunday to beat Finland 3-2. The victory was Germany's second of the tournament, and the first against Finland at the world ice hockey championship in 25 years.

"That felt good. It was a good step in the right direction. I liked how we played together," Germany head coach Marco Sturm said afterwards.

Germany were coming off a  3-1 loss to Latvia on Saturday.

Germany, who earned silver at the 2018 Winter Olympic games in Pyeongchang, have a chance to pick up a third win against Canada when the two play on Tuesday.

Sturm's side has spent much of the tournament playing from behind and they conceded another early goal in the first period. Finland Eeli Tolvanen swerved around Moritz Müller before swiping the puck past goaltender Mathias Niederberger.

The Germans got their act together in the second period. Frederick Tiffels leveled the score, slapping in a pass from Yannic Seidenberg. Björn Krupp then put Germany ahead with a wrister from the left point.

But Finland, who have scored the second most goals in the tournament, kept applying pressure in the third. Tiffel's slashing penalty with just over three minutes to play gave the Fins the window they needed to level the score, with Sebastian Aho scored on the ensuing powerplay.

In overtime, Eisenschmid received a pass from Dominik Kahun on the break and slotted home the game winning goal.