Germany suffered a fifth defeat at the Ice Hockey World Championship, losing to Latvia 3-1 in Denmark. With two games to play, they are now on the outside looking in as they try to qualify for the quarterfinals. 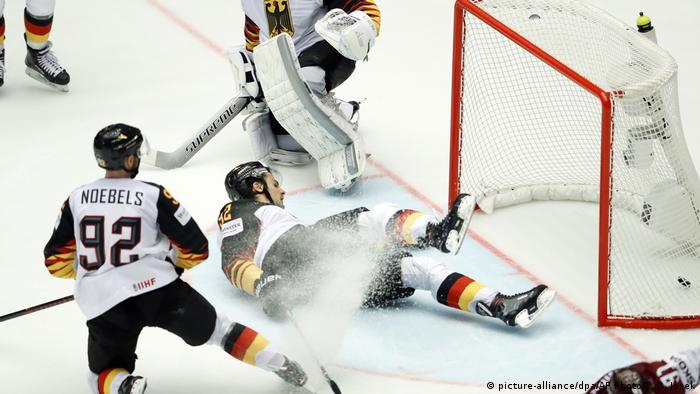 Latvia inflicted another defeat on Germany at the IIHF World Championship in Denmark, beating the Germans 3-1 at the Jyske Bank Boxen arena in Herning on Saturday.

Rudolfs Balcers, Rodrigo Albos and Andris Dzernis scored three unanswered goals in the second and third period, with Dominik Kahun scoring a consolation for Germany, who conceded a lot of chances on the ice.

"We played our best game today," said Germany captain Dennis Seidenberg, who plays for the New York Islanders in the NHL. "We had enough chances, but we didn't take advantage of them consistently."

The loss puts Germany, who won the silver medal at the 2018 Winter Olympics in Pyeongchang, on the brink of elimination from the competition. They sit four points behind Finland and Latvia, who currently hold the final two qualifying spots for the quarterfinals. The Germans must now beat Finland on Sunday to avoid an early exit.

Stuck in the penalty box

The Germans lacked discipline early in the game. They played more than half of the first period short handed after picking up six penalties.

Latvia outshot Germany for most of the game and took the lead with three minutes to play in the third period. Balcers passed it across to Albos, who set up a slap shot for Ronalds Kenins. Guntis Galvins doubled Latvia's lead 15 seconds into the third period and Andris Dzernis added another less than seven minutes later.

Kahun got Germany on the board later in the third, slashing in a pass from Leon Draisaitl. The Germans outshot Latvia 14-9 in the third period, but it wasn't enough to get them back into the game.

Germany entered their fourth game at the Ice Hockey World Championship in Denmark knowing they needed their first win to keep their hopes alive of reaching the quarterfinals. They had little trouble with South Korea. (09.05.2018)