ICC′s Gadhafi probe could empower neighbors more than Libya | World | Breaking news and perspectives from around the globe | DW | 17.03.2011

The international criminal investigation against Gadhafi may have limited impact on the Libyan conflict. But it could also give protesters in other Arab countries new momentum in their bid to force democratic reforms. 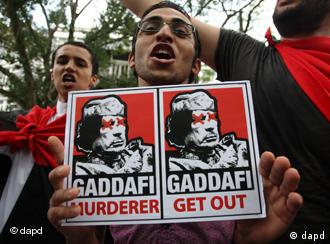 Gadhafi is a target both within, and outside of, Libya

In a period of two weeks, the world community stripped Libyan leader Moammar Gadhafi of his status as rehabilitated dictator, relegating him to the rank of international pariah and possible war criminal.

On February 26, the UN Security Council voted unanimously to refer Gadhafi's violent crackdown on peaceful protesters to the International Criminal Court in The Hague. It was the first unanimous referral in the Security Council's history.

But in the weeks since the Security Council's historic vote, the international response to the conflict in Libya has floundered. As world powers debate the pros and cons of military intervention, heavily armed and well-trained Gadhafi loyalists have regained momentum and pushed deeper into rebel-controlled territory, closing in on the opposition stronghold of Benghazi.

So while the Security Council's vote to investigate the Gadhafi regime may lend moral support to the embattled rebels, it has little practical impact on the balance of power in Libya. However, holding the Gadhafi regime legally accountable for alleged crimes could give renewed momentum to other opposition movements throughout the Arab world.

Richard Dicker, director of the international justice program at Human Rights Watch, told Deutsche Welle that the Security Council quickly turned against Gadhafi after he publicly expressed the intention to systematically attack civilians, which would amount to a crime against humanity.

"Members of the council were horrified by statements Moammar Gadhafi had made in the previous days promising bloodshed on a broad scale directed against those peaceful protestors in the streets of Libya," Dicker said. "And by the reports in the media of the security forces - some uniformed, some not uniformed, some reputed to be mercenaries - using violence and lethal means on a widespread basis."

However, Libya expert Dirk Vandewalle views Gadhafi's fall from international grace more as a story of political intrigue than values. Vandewalle, a professor at Dartmouth University, told Deutsche Welle that the Security Council is using human rights and the ICC as political tools to punish Gadhafi for having publicly fooled world leaders for years.

In 2003, the Gadhafi regime agreed to give up its WMD program and cooperate with the West on counterterrorism. Gadhafi's son Saif al-Islam had also talked about the possibility of democratic reforms. As a reward, Tripoli was brought back into the international fold.

"This was a regime that had wanted to become reintegrated into the international community," Vandewalle said. "And then in the end, when the uprising took place, it was shown for what it was – a sham."

And the emerging reality of grassroots democratization in the Arab world may have convinced the major Western powers that it was time to dump Gadhafi. Anthony Dworkin – an expert on human rights and international justice – argues that the Security Council members were responding to fundamental changes in the politics of a broader region gripped by upheaval.

"What changed are the population and the regional context," Dworkin, who works with the European Council on Foreign Relations, told Deutsche Welle. "It's no longer just international pressure against Libya – it's also international support for a protest movement that has turned into a large-scale attempt to change the political system under which the country is governed. "

As the fighting in Libya rages on, Dicker says that the criminal investigation might deter some people in Gadhafi's inner circle from committing war crimes. On March 3, the ICC's chief prosecutor announced that the criminal investigation would focus on 10 to 15 top leaders. The Libyan national security advisor and Gadhafi's son Khamis are among those under scrutiny. Khamis commands the feared 32nd Brigade which is currently making advances against the rebels.

A refusal by top lieutenants to carry out orders would amount to a mutiny. Theoretically, the rebels could then exploit the division among Gadhafi's inner circle to regain lost momentum. However, Vandewalle says that the Gadhafi regime - largely a family enterprise - is unlikely to crack under international pressure.

"The regime was already so entrenched and so committed to fighting this out that it probably had little practical effect," he said. "If you listen to Gadhafi and [his son] Saif al-Islam talking about standing up to the last bullet - that was way before the ICC. They were committed to that kind of stand anyway."

Ultimately, the ICC referral may have a more profound impact on the uprisings in other Arab states, such as Bahrain. Vandewalle points to the Arab League's call for a no-fly zone over Libya as a sign that the broader Mideast is adopting the language of human rights as part of a political dialogue. 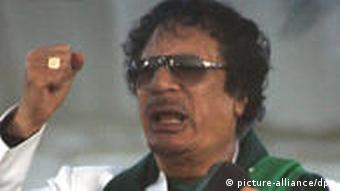 Gadhafi has dug in to the end, experts say

"The fact that this becomes part and parcel of an international conversation, of an international vocabulary is very important because it introduces a kind of a norm that we have not seen and that certainly the Arab leaderships themselves would have really objected to very violently until very recently," he said.

That international conversation has focused increasingly on government accountability. And in the Arab world, for the first time in recent history, accountability is being demanded below as well as above. Protesters are calling for reform at the grassroots level while the international community – through institutions like the ICC – is increasingly demanding that basic human rights be respected.

If the ICC truly holds the Gadhafi regime accountable for violently cracking down on the Libyan opposition, the case could create a precedent that gives protesters around the Arab world the legal cover they need to stay in the street until their demands are met.

"The ICC actually wanting to take this up gave a lot more breathing room to these oppositions," Vandewalle said. "And the opposition could fold their dialogue or grievances that they had within a much larger international context saying [that] there's legitimacy here to what is being asked.

"In a sense that has really changed - perhaps for ever - Arab politics."

Gadhafi warns of 'bloody war' in Libya as fighting continues

A counteroffensive by Libya's leader in the rebel-controlled east fails, as clashes continue around the country. Leader Moammar Gadhafi warns that any foreign interference will spark bloodshed. (02.03.2011)

US truce with International Criminal Court paves way for cooperation

After years of open hostility, the US and the International Criminal Court have agreed to an uneasy truce. Can the only military superpower forge a partnership with the world's most ambitious war crimes tribunal? (19.11.2010)