Arab League calls for UN to impose no-fly zone over Libya | World | Breaking news and perspectives from around the globe | DW | 12.03.2011

The Arab League has called for a no-fly zone over Libya to stop Gadhafi's air strikes on his country's rebels. The decision may pave the way for Western forces to intervene in Libya, where rebels are taking hard hits. 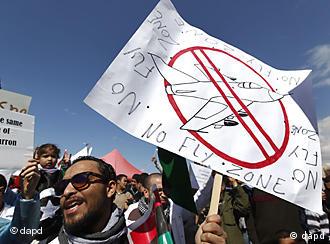 The Arab League threw its support behind calls for a no-fly zone over Libya on Saturday as the Libyan military closed in on the opposition.

"The Arab League has officially requested the U.N. Security Council to impose a no-fly zone against any military action against the Libyan people," said Arab League Secretary-General Amr Moussa, adding that the no-fly zone should be ended when the crisis was over.

Approval from the 22-member organization, which met Saturday in Cairo, could pave the way for military action against Gadhafi by Western forces.

The League said it rejected any "foreign military" intervention against the Libyan people and it had opened contact with the rebel Libyan National Council. 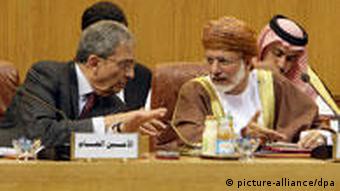 Earlier in the week, leaders including NATO Secretary-General Anders Fogh Rasmussen and German Foreign Minister Guido Westerwelle said they would consider imposing a no-fly zone only with support from Libya's Arab neighbors.

Moussa said Saturday that the "serious crimes and great violations" of the Libyan government against its people had stripped it of legitimacy.

Rebel forces have repeatedly asked the international community to impose a no-fly zone to stop Gadhafi's air strikes, without which they say their three-week insurgency could fail.

Meanwhile on Saturday, Gadhafi's forces were reportedly within striking distance of Libya's second city, the opposition stronghold of Benghazi. Earlier in the day, they retook the northern oil town of Ras Lanuf earlier in the day.

The fall of the city was confirmed by former Libyan Interior Minister Gen. Abdul Fateh Younis, who defected to the rebel side.

"The rebel forces, who for weeks rapidly advanced on the capital Tripoli in a bid to oust Gadhafi, are loosing steam to the better armed government forces," news network Al Jazeera reported from Brega, where Gadhafi's troops had also invaded.

Younis vowed that the rebels would launch a counter-offensive by Sunday at the latest.

On Friday, Western leaders vowed to consider military action to force out Gadhafi, though there was no commitment to a no-fly zone.

European Union leaders meeting in Brussels said they would consider all options to remove Gadhafi, but stopped short of endorsing air strikes, a no-fly zone or other military-backed means to achieve that goal. 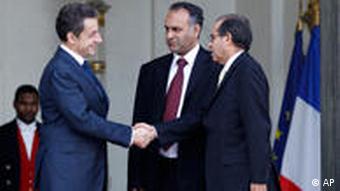 Gadhafi has broken ties with France for recognizing the rebels' council

The summit did not decide on a British and French initiative for a UN Security Council resolution to authorize a no-fly zone. It also did not consider French President Nicolas Sarkozy's proposal for "defensive" air strikes against Libya or his call to follow France in recognizing the rebel National Libyan Council as the Libya's only legitimate authority.

US President Barack Obama said on Friday the United States and its allies were "tightening the noose" around Gaddafi and added that he had "not taken any options off the table."

A rebel leader urged the international community to approve a no-fly zone over Libya after Moammar Gadhafi's forces regained control of both the town and the oil refinery in Ras Lanuf. (12.03.2011)

The global community remains divided over establishing a no-fly zone over Libya. Some say the time has come to protect Libyan civilians from Moammar Gadhafi's bombs. Others doubt the legality of intervention. (11.03.2011)

Foreign workers accused of being mercenaries in Libya

It has been widely reported that Moammar Gadhafi is using foreign mercenaries from sub-Saharan Africa. Now many from that region living in Libya are fleeing for their lives, suspected of having fought for Gadhafi. (11.03.2011)

In the run-up to the national elections in exactly three months, rival Libyan politicians seem to be putting a vote seen by many as a chance for peace in acute danger.