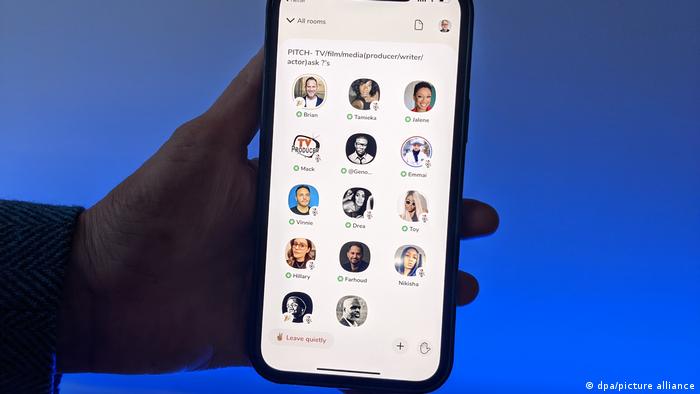 Clubhouse is an exclusive audio communication app that has gained popularity in recent months. In Germany, it became the most downloaded app for iPhone this week.

"After many months of video conferencing, there is obviously a need to chat with other people and not have to sit in front of a camera," Markus Beckedahl, the founder of German digital-freedom blog Netzpolitik, told DW.

Clubhouse advertises itself as a "space for authentic conversation and expression." In essence, the app offers a live, interactive podcasting experience. Users can set up virtual "rooms" on a topic of their choice, which anyone with an account can then join.

Listeners can virtually raise their hands to chip in, but the host or hosts decide who is allowed to speak. Hundreds or even thousands tune in to discussions on popular topics or with celebrity hosts, but there is no function to chat, "like" or comment on discussions.

A popular German-speaking room is "Mittag im Regierungsviertel" — "Lunchtime in the government district." A group of speakers, among them prominent German members of parliament and journalists, discuss a political issue of the day — like the right to work from home — while also sharing what they had for lunch.

Speakers pop in and out depending on other commitments and the moderator invites other users to ask questions. The effect is decidedly chummy.

Why is it successful in Germany now?

The range of topics for chats is huge. "I found it interesting just now to join in a discussion on Black Talks Germany" wrote Green Party politician Aminata Toure on Twitter about her participation in a chat focusing on racism in the country.

Clubhouse sells itself on its intimate, unedited nature. In Germany, politicians like pro-business Free Democratic Party (FDP) leader Christian Lindner were the first to take to it. Without the pressure of video, politicians and social media influencers alike can invite participants into an exclusive club: They can talk directly to people with no intermediary, while the medium itself retains a sense of elitism.

Audio media forms are enjoying a vogue that few of the doom-mongers of the death of radio would have predicted a few decades ago, particularly among millennials. Podcasts are an ever-growing medium, having doubled in popularity in the US in the last decade. And the voice note feature of a number of apps, first introduced by WhatsApp in 2013, has more recently been adopted by Facebook, Instagram and Telegram in recognition of the fact that more people want to communicate by audio message.

But the app could yet prove to be a fad: "I have no idea if anyone in Germany will still be talking about this app next week or next month, or if the interesting functionalities will simply be copied by already established social networks like Twitter or Facebook and then used there," media analyst Beckedahl said.

"One popular aspect is that you can listen to all kinds of people talking — including celebrities," Cologne-based media lawyer Christian Solmecke told DW. "But the decisive selling point is the 'artificial scarcity' that is popular among marketers and advertisers because you can actually only be part of the app community if you have been invited."

Launched for US consumers in April 2020, Clubhouse's Silicon Valley developers say the app is still in "beta private" mode: To avoid the system being overwhelmed, they have limited the number of users.

By late December 2020, there were 600,000 users worldwide. Each account holder can invite two people to join the app with their cellphone numbers. And Clubhouse is only available on Apple iOS, so Android users are also barred for now. Some people are desperate to get in: Invites have been advertised on eBay for over $100 (€82).

In this way, Solmecke explains, the app "plays off consumers' FOMO (fear of missing out)." Markus Beckedahl says, "Many celebrities are using the app, which is why a media hype ensues as people are afraid of missing out on something innovative."

But many rooms are not just the playgrounds of the rich and famous. The app has also found a large market with entrepreneurs and influencers. Rooms with names like "Daily Habits of High Performers"  and "MILLION DOLLAR SOCIAL MEDIA ENGAGEMENT" attract hundreds of listeners, hungry for tips and tricks from experts in the field. In a particularly meta example of this trend, it is even possible to dip into rooms that offer advice to "Become a Master Clubhouse Moderator."

The radically free nature of the rooms, while apparently egalitarian, has already courted controversy. Rooms described as "safe spaces" for a particular gender or ethnic group were open for anyone with an account to join — though the moderator can kick out people who are causing trouble and report them.

New York Times journalist Taylor Lorenz has written extensively on how certain Clubhouse rooms are bastions of misogyny, anti-Semitism and racism. With no recordings of the rooms, there is little way for independent observers to investigate any of these accusations.

Clubhouse has also been accused online of lacking accountability. All room conversations take place live and nothing is permanently recorded. The Clubhouse website says "temporary recordings are made while the room is live" and if a "Trust and Safety violation" is reported by a participant during the discussion then the audio is retained. But if anyone wants to keep a recording of a room for themselves, or report an incident of hate speech or abuse afterward — they cannot.

The permanent nature of Tweets or Facebook posts have caused harm to many a professional image. But on Clubhouse, once discussions are over, they disappear into the ether.

Concerns have also been raised about the way the app accesses users' data.

"The service has apparently grown too fast and does not take the requirements of the GDPR into account," as Hamburg Commissioner for Data Security and Freedom of Information Johannes Caspar told DW. The General Data Protection Act (GDPR) is an EU regulation that aims to give individuals greater rights over how companies use their data.

"It is completely unclear what happens to the user's data (for example contact lists) and whether it is sold on to third parties," Marcus Beckedahl said. "The vague terms and conditions allow this."

Nevertheless, the app has turned its focus on freedom of speech and its ephemeral nature to its advantage. If a large number of users want to network, they may well be happy to turn over their data.

Unlike on Twitter, where thousands of faceless bots clog the system, Clubhouse requires members to use their real names.

But with thousands more users signing up every week, the elitist nature of the app will change. "The app's founders have already announced that soon it will be possible to sign up without an invitation," media lawyer Solmecke explained. "Then, of course, the app could lose its appeal."

Social Media and The Power of Big Tech Companies

Rioters mobilized to storm the US Capitol predominantly on social media. When Facebook, Twitter and other major networks started removing the most extreme posts, users migrated to platforms like Parler and MeWe.

One day the coronavirus may well be remembered as a driver for messaging and digital conferencing services. But the sensitive nature of information makes using them a game of trade-offs in which security isn't absolute.