While hunting in Germany has long been seen as part of the country's conservation program, taking to the forest with arms now attracts Germans for other reasons and the activity is growing in popularity. 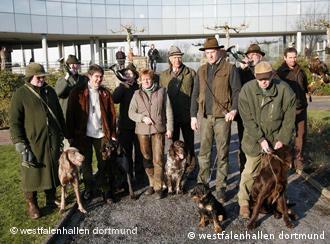 In the UK, it's the preserve of gamekeepers and the landed gentry; a countryside tradition of tweed-clad shooting parties and red-blazered hunt masters surrounded by baying beagles. In the United States, it's an everyman sport; all orange vests, Elmer Fudd hats and embarrassing events involving vice presidents.

In both countries, hunting is a way of life, albeit one which is embraced by very different social circles on either side of the Atlantic. But what of Germany? For those who have ever hunted for fun or necessity, Germany's rolling hills and wild expanses of forest conjure up images of a target-rich environment. For others, hunting in Germany may just be a series of headlines about problem bears and the return of wolves.

"Hunting in Germany cannot be compared to that which takes place in Great Britain or the United States," said Thorsten Reinwald, spokesperson for the German Hunter's Association (DJV). "It is closer to the British concept of culling. Hunters in Germany follow strict quotas for the shooting of particular animals like deer and have a responsibility to contribute to the regeneration of the environment."

Hunting in Britain and the United States is seen as a sport, whereas the DJV promotes the activity as a necessary part of Germany's conservation policy, Reinwald said. 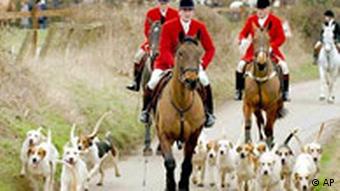 Tally-ho! Hunting in Britain has a high media profile

Hunting in Germany remains relatively low-key with discussions on the subject making only rare forays into the media. It seems that, unless you are in the know, Germany's hunters barely feature in the wider public consciousness and are happy to sit with their hides away from the glare of publicity.

Germany boasts a hunting population of over 300,000, of which 90 percent are members of the DJV. Almost half of all the hunters in Germany come from the sector the DJV annual report describes as "employees/workers," a vague title which does, however, exclude farmers -- a group often associated with hunting more than any other.

The DJV says that 15 percent of German hunters work in farming while a further 27 percent are "self-employed." Pensioners and the unemployed make up the final 11 percent.

While "employees/workers" could include anyone from bus drivers to bank managers, it suggests that the 47 percent of German hunters, who qualify under this heading, plus those who work for themselves, are of gainful employment. And they need to be. Hunting in Germany does not come cheap.

A lot of time, money and training goes into being a hunter

A course to fulfill all the criteria and results in the participant being ready to apply for a license (Jagdschein) can cost in excess of 700 euros ($905).

In addition to the financial costs, hunting in Germany requires a dedication of the mind as well as one of the pocket as gaining a hunting license is a complicated affair. To do so, one needs to attend a specialist training course that often requires the would-be hunter to rack up at least 120 hours of practical and theoretical training.

As stipulated in federal hunting law, a candidate must pass the hunting examination, which is composed of a written and oral examination and a shooting test with both a shotgun and a rifle. According to the law, the candidate must show adequate knowledge of a vast selection of topics including game biology and management, hunting management, farming and forestry, firearms law and technique, and gundog handling.

Hunters are also subject to strict police checks and will be refused a license if they have been found guilty of any crime involving firearms, ammunition and explosives. Offenses against nature conservation or protection of animal rights or if the applicant is addicted to drugs can lead to license revocation. 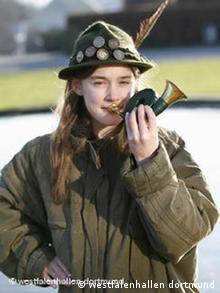 While the German hunting community champions itself as an inclusive one -- open as it is to all law-abiding citizens over the age of 18 who have the time, money and inclination to earn a license -- the expenditure, dedication and personal requirements needed to qualify does give the pastime an exclusive feel.

For some, having a hunting license becomes a trophy in itself; a status symbol which allows the bearer to enter another world where like-minded individuals gather to revel in their own achievements and pursue an activity safe in the knowledge that they are among those who have earned the right to hunt.

The feeling of community has gone a long way to attracting the new generation of hunters, a breed where the bonding over warm guns and carcasses is as important as the hunting itself.

"Researchers at the University of Bremen have discovered in a study that this is one of the main reasons behind people pursuing a hunting license," the DJV's Thorsten Reinwald said. "Hunting brings an intense physical experience and balances the stresses of hectic everyday life."

Escaping the pressures of the city to indulge in an activity that is, at its very roots, primal has proved to be something of a lure to an increasing number of young professionals, mostly from corporate management positions. While hunting provides a safety valve from the stresses of work, it also provides a platform for networking. 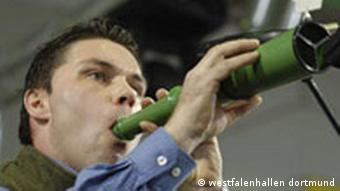 The new generation gets to blow its own horn

"When I started my internship at McKinsey, I often heard the consultants planning hunting trips," said Lars Fischer, a visitor to the annual Jagd und Hund hunting convention held in Dortmund. "There would be excitement whenever someone managed to get a senior manager to come along. It was never said out loud but everyone knew that having a hunting license was a way to get into certain influential circles. It inspired me to go for mine."

Annabelle Gretschner, a museum curator's assistant from Münster at the convention with her partner, has a similar story.

"Many of the guys I studied with now have their license," she said. "Very few of them had any interest in hunting at university but now the ones who have management level jobs often go shooting with clients and colleagues. Deals and connections are made out in the wild very much like they used to be on the golf course."

So, while hunting in Germany appears to serve the main purpose of keeping down the numbers of certain wild animals as part of an environmental agenda, some of those who hunt are reaping their own benefits while advancing the activity's popularity among a new generation.

Killing a male bear with a thirst for blood is one thing. Killing a rare albino deer because it may dilute the gene pool is another. The state of Saxony is in a stir over White Bambi with the pain of Bruno still raw. (04.11.2006)

Hunt supporters and their opponents prepared for a clash of wills over a ban on using dogs to hunt foxes and other animals which took effect Friday, ending a centuries-old tradition in England and Wales. (18.02.2005)