White Bambi Hoping to Avoid Brown Bruno′s Fate | News and current affairs from Germany and around the world | DW | 04.11.2006

Killing a male bear with a thirst for blood is one thing. Killing a rare albino deer because it may dilute the gene pool is another. The state of Saxony is in a stir over White Bambi with the pain of Bruno still raw. 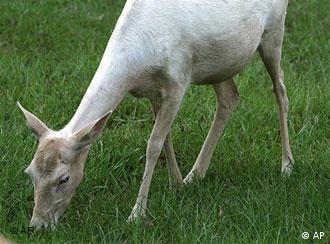 One minute you're gamboling freely through the German undergrowth; the next, your carcass is adorning a study wall or fireside hearth.

Life in the wilds around the Erzgebirge mountains of eastern Germany is a precarious balancing act. Just ask Bruno the Bear. Except you won't get an answer because he's dead.

The same fate could await the latest animal to rise to the top of a German state's hit list. A rare albino deer dubbed White Bambi is currently living on borrowed time as hunters and local officials in the eastern German state of Saxony argue about whether the buck should be killed.

"The white deer is a mutation. It does not belong in the wild; it should be shot," said Günter Giese, the president of the Saxony Hunting Federation.

What's behind the bloodlust? Giese was just echoing the thoughts of wildlife experts who have stated that the animal poses a danger to future generations of deer in the region and should be taken out of circulation. They are concerned that Bambi could contaminate the gene pool of the deer population when it mates.

Legend could save Bambi's hide 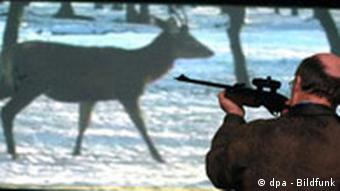 Hunters are unwilling to kill the real-life White Bambi

However, Bambi, blissfully unaware of the entire furor at the moment, has a group of unexpected supporters. Hunters in the Erzgebirge mountain region are refusing to shoot him.

"We who hunt in this area agree that the deer should stay alive because we enjoy seeing it and because it is pretty," Gottfried Meier, a hunter who has regularly spotted White Bambi since he first appeared in May, told reporters. "A white deer is something different."

Apart from looking pretty, the hunters have another more mysterious reason for not putting a bullet between Bambi's eyes. Many hunters believe that a curse falls on anyone who kills a white deer. Legend has it that the hunter or a member of his family will die within a year of the deer's death. 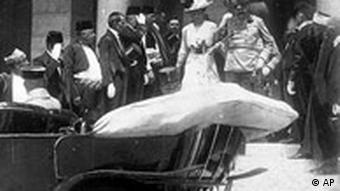 Ferdinand's hunting hobby has a lot to answer for

One famous hunter who is often quoted in the cautionary tale is one Archduke Franz Ferdinand. The Austrian leader was a keen hunter and shot a white stag in the autumn of 1913. Within a year, he was assassinated in Sarajevo and the rest, as they say, is history.

Bambi, rare because only one in 10,000 deer has the genetic trait that makes it an albino, is gaining in fame in a country still mourning the killing of Bruno the brown bear in July.

Bruno made the mistake of wandering down from the Italian Alps into Bavaria in the spring where he went on a seven-week rampage. After being declared a public danger after walking through villages, killing livestock and famously sitting on a guinea pig, the Bavarian environment ministry sent a team of assassins after Bruno. 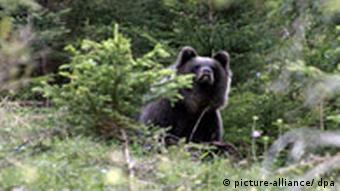 His reign of terror was brought to end by a single bullet in July sparking a national outcry and causing a PR disaster for the Bavarian tourism industry.

The Saxony environment ministry, keen to avoid the same faux pas made by its Bavarian counterpart, is publicly backing Bambi.

"As a rarity and natural phenomenon, it should be allowed to live," a ministry spokeswoman said.

"Bruno" -- the first wild brown bear to be sighted in Germany in over 170 years -- was shot dead in Bavaria. While he was considered dangerous, wildlife experts say it is time to prepare for the return of more bears. (26.06.2006)

Germans Up In Arms Over Shooting of Bruno the Bear

Germans protested in Berlin on Saturday the shooting last week of "Bruno" the brown bear. Many have requested criminal charges be brought against those responsible for the bear's death. (03.07.2006)

Bruno the Bear's Brother Considering a Trip to Germany

A brown bear named Bruno became a cultural icon and a government headache this summer when he crossed into southern Germany. Now, Bruno's brother could be ambling towards the German border. The bear saga continues. (28.07.2006)