Clash Looms over English Hunt Ban | Europe| News and current affairs from around the continent | DW | 18.02.2005

Hunt supporters and their opponents prepared for a clash of wills over a ban on using dogs to hunt foxes and other animals which took effect Friday, ending a centuries-old tradition in England and Wales. 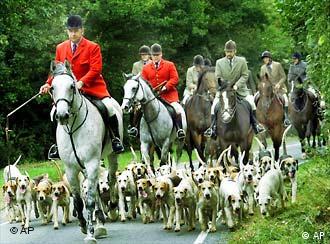 A potential pack of criminals

Hunt supporters either vowed to defy the ban or said the legislation was so riddled with loopholes that it was ineffective, while their opponents vowed to help the government enforce the new ban with video camera surveillance.

Tim Bonner, the media director for the pro-hunting Countryside Alliance, said he expected hundreds of thousands of hunt supporters to turn out in England and Wales Saturday to test what he considered to be hazy legislation.

"Our advice is to test the law and not to break it," Bonner said. "There are huge grey areas in it. For instance, if several people have two hounds and are in the same area, then the two hounds become four hounds, and become six hounds and become eight hounds."

"The law says that if you lay a scent of a dead fox and the hounds then run off and hunt a live fox, which they are quite likely to do, and kill it, then you won't be breaking the law because you intended to hunt an artificial trail," he said.

He was referring to "drag" or "trail" hunting, in which hunters will still be allowed to attract hounds by trailing a dead fox or a bag of straw scented with fox urine. "This has absolutely nothing to do with protecting foxes. More foxes will be killed as a result of this law."

Other hunt supporters said they would violate the law anyway since it would be impossible for police to follow them over large stretches of countryside. Douglas Batchelor, the chief executive for the League Against

"We have fought 80 years for this law, we will not let them flaunt it," Batchelor said. 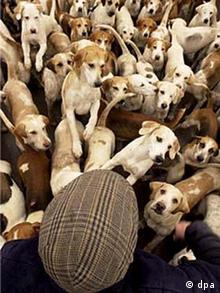 He dismissed claims that the law cannot be applied as "utter nonsense" and said "we will be watching" with tens of thousands of pounds worth of video cameras that his group has purchased. "Hunters should be aware that we have the capacity to monitor every hunt in the country," he said, adding, "lawbreakers will be prosecuted."

Not only will league members monitor hunts, "we will be recording conversations in pubs.... If they are talking about ways of breaking the law, this is criminal conspiracy."

Leading anti-hunt Labour lawmaker Tony Banks said he was aware the legislation would be tested by hunt supporters, but predicted most people would comply with the ban. In an interview with BBC radio, he said: "I think we are going to find that, after a few difficulties, this is going to disappear and people in a few years' time will be wondering what on earth all the fuss is about."

On whether Labour would lose votes over the ban, he said: "Most people for whom hunting is their way of life and it's the most important thing in their life won't vote Labour, even if Labour brought back slavery and witch-burning."

People could use the ballot box to register their anger, he said, adding: "However, I don't think it will have any effect on the election at all." 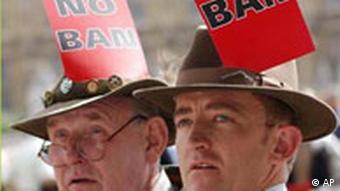 The Hunting Act, which took effect at midnight, was the result of years of campaigning by those who regard hunting with hounds -- a part of British country life for centuries -- as cruel and inhumane. Proposed by Prime Minister Tony Blair's Labour government, the ban was adopted by the House of Commons last November after a rarely-used law was pressed into service to override opposition in the unelected House of Lords.

Police forces have warned that the law, which follows a similar hunting ban in Scotland, could prove difficult, if not impossible, to enforce. The ban most notably affects fox hunting, in which red-jacketed riders on horseback gallop after foxhounds which trail a fox and, if they are successful, will catch it, kill it and rip it apart.

Lesser known, but also to be prohibited, is hare coursing, a spectator sport in which a pair of greyhounds are set loose after a hare which often, but not always, gets away.

Britain's parliament has forced through a ban on fox hunting, leaving Prime Minister Tony Blair facing the prospect of massive civil disobedience from hunters in the run-up to an imminent general election. (Nov. 19, 2004)

Love and Betrayal in the Animal Kingdom

In its latest major show, the German Hygiene Museum in Dresden is exploring the contradictory relationship between people and animals. (Nov. 25, 2002)