Lawmakers from Hungary's governing majority have approved a controversial new constitution amid a boycott by the opposition. Critics fear a ban on abortion and discrimination against homosexuals and non-Christians. 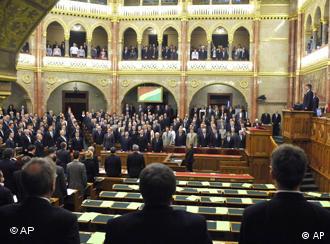 With a two-thirds majority in parliament, Hungary's ruling center-right party effortlessly pushed through a controversial new constitution Monday that the opposition deems an attack on democracy and citizens' rights.

While the far-right Jobbik party voted against the text, the opposition Socialists and left-wing green LMP party realized their voice was powerless against that of Prime Minister Viktor Orban's Fidesz party and boycotted the vote altogether.

Hungary's 386-seat parliament adopted the controversial new constitution on Monday, with 262 votes in favor, 44 against and one member abstaining.

After thousands of Hungarians marched in protest to the new constitution over the weekend, demonstrations continued during the vote with a flash mob organizing near parliament, where a giant Pac-Man figure in Fidesz's orange devoured a sign representing the rule of law. Socialists planned a "Walk for Hungarian Democracy" near parliament. 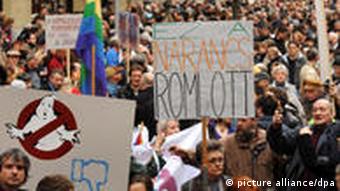 Thousands turned out to protest the new constitution

Critics say the constitution is the government's attempt to cement its power beyond its term, alleging that it eliminates the system of checks and balances, prevents Hungary's eventual adoption of the euro, forces its Christian ideology on the country and limits civil liberties.

The new constitution's preamble is laden with references to God, Christianity, the fatherland, the "Holy Crown of Hungary," and traditional family values, raising opposition fears about the future rights of Hungary's atheists, homosexuals and single-parent families.

However, the majority in parliament did not share these fears. Laszlo Kover, a Fidesz parliamentarian and speaker of the house welcomed the new basic law, saying it "acknowledges Christianity as the basis of our civilization but it ensures moral freedom."

Fidesz prepared the draft text on its own, without participation from opposition parties, a point highlighted by critics, such as Ulrike Lunacek of the European Greens.

"If the government has a two-thirds majority, it has a very strong responsibility to be very sensitive about that. To involve other groups and civil society and other parties in a process of a constitution and not just say: 'Oh, we want our own things in it,'" Lunacek told Deutsche Welle. "It is a Fidesz constitution, not a Hungarian constitution."

But Deputy Prime Minister Tibor Navracsics said opposition parties were invited to submit their versions, but refused to help frame the draft. 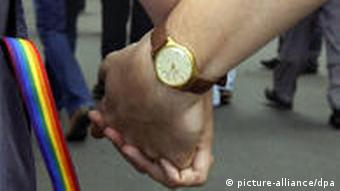 The new constitution serves as a preemptive ban on gay marriage

"We have been discussing the context and the draft of the constitution for about a year," he said. "How many days, weeks or years so that even non-governmental organizations can accept that process?"

The law, which submits several key decisions to two-thirds majorities, curbs the powers of the top court on budget and tax matters and allows the president to dissolve parliament if a budget is not approved by April. It also imposes strict rules to reduce public debt, defines marriage as the union of a man and a woman and stipulates that the life of the fetus should be protected from the moment of conception - a provision which activist groups warn would lead to a ban on abortions.

"The new basic law is going to be illegitimate and temporary and will have to be changed after the next elections on the basis of a national consensus," Socialist leader Attila Mesterhazy said at a boycott event on Monday.

German deputy foreign minister, Werner Hoyer, commented on Monday in Tunis that Hungary's current course was not in line with European values.

"We are observing the developments in Hungary with great attention and not without concern," he was quoted as saying on the German Foreign Ministry's website.

"The fears set in motion [earlier this year] by Hungary's media laws are strengthened rather than alleviated by today's passage and [the impending] realization of the new constitution," Hoyer added.

The text must be ratified by President Pal Schmitt, a member of Fidesz, on April 25 before it can enter into force on January 1, 2012.

Six months ago, a deadly red sludge from an alumina plant devastated part of western Hungary. Many villagers have now returned to the region, but risks remain. (04.04.2011)

Following talks with the EU Commission, Hungary's government on Monday caved into Europe-wide pressure by agreeing to change a recent media law that restricts freedom of the press. (08.02.2011)

Viktor Orban, Fidesz plot to maintain their hold on Hungary 01.05.2021

With the polls projecting defeat for Hungarian Prime Minister Viktor Orban in 2022, the government is seeking to preserve its control over state institutions through a series of very well-funded foundations.

A new law increases the government's control over the institutions. At the same time, a planned Chinese campus is causing an uproar.