Hungary has bowed to pressure from the European Commission to amend a contentious media law that was slammed over concerns it would hamper press freedom in the country. 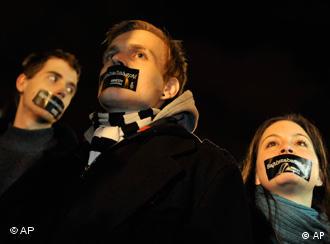 The media law was harshly criticized within Hungary

Hungary has watered down a controversial new media law after it attracted intense criticism from the European Union over fears it could curb media freedom in the country.

The Hungarian parliament on Monday evening voted overwhelmingly to amend the legislation which had subjected media organizations to a supervisory authority with the power to impose substantial fines if coverage was found to be lacking in "balance" or respect for "human dignity."

The amendments narrow the scope of the law so it no longer covers on-demand services such as Internet sites or blogs. It also limits potential action against foreign media reporting from Hungary.

Registration with the authorities will no longer be a prerequisite for media operations, and a ban on offensive content has also been softened.

The law came into effect on January 1, the same day Hungary took over the rotating six-month presidency of the EU. It has loomed large over Budapest's leadership of the bloc, focusing more attention than usual on the country of around 10 million. 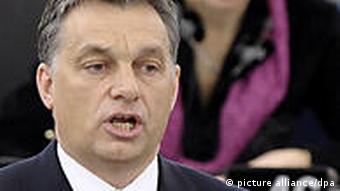 Orban (left) defended the law in the European Commission

Hungarian Prime Minister Viktor Orban has strongly defended his country against accusations of curbing press freedom through the law, which had drawn sharp rebukes across the EU, with Germany, Britain and France being particularly outspoken.

Journalists were joined by the Hungarian public in protesting the law.

European Union telecoms chief Neelie Kroes on Monday said she was satisfied with Hungarian guarantees that changes to the media law would comply with all EU rules.

"So far the European Commission and the government of Hungary did agree on the amendments that were badly needed on the proposal that was sent to parliament," Kroes told a news conference.

"In the implementation, we still need to be quite active in monitoring what is at stake. We will give it a close look in the monitoring [phase] afterwards."

Hungarian premier hits out at foreign critics, including Brussels

Hungarian Prime Minister Viktor Orban has hit out at foreign critics of a contentious media law in an address to parliament. Orban, whose country holds the EU presidency, vented some of his anger at Brussels. (15.02.2011)

Hungarian Prime Minister Viktor Orban has defended his country's controversial media law against hefty criticism from the EU. Governments across Europe have slammed the legislation as a blow to press freedom. (19.01.2011)