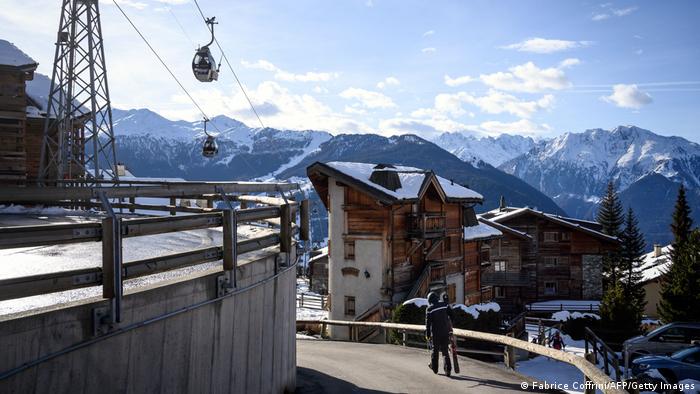 The Swiss alpine resort of Verbier is popular with British holidaymakers

Hundreds of British guests put in quarantine over the new, more infectious variant of the coronavirus have fled the Swiss ski resort of Verbier, with some reemerging in neighboring France, Swiss authorities reported on Sunday.

Verbier, an alpine village located in the municipality of Bagnes in Canton Valais, is a popular ski destination for British tourists.

Bagnes spokesperson Jean-Marc Sandoz said Swiss authorities had identified 420 guests from the United Kingdom who had been ordered into quarantine before Christmas.

About 50 fled immediately, and of the 370 others less than a dozen were still there on Sunday, he said, adding that some of the guests have reappeared in France.

"Many of them stayed in quarantine for a day before they set off unnoticed under cover in the darkness," he said.

According to local media, hoteliers began to suspect a "secret departure" because calls to quarantine rooms "were repeatedly unanswered" and meals left in front of rooms "had not been touched."

"That was the worst week our community has ever experienced," Sandoz told newspaper Sonntags Zeitung, calling it an "unprecedented situation." He said Bagnes felt abandoned by both the federal and regional governments.

Verbier tourism director Simon Wiget later denied that hundreds of Britons had fled. He told Germany's dpa news agency that it was unclear where the initial figures cited by Sandoz came from, and that only around a dozen tourisms likely skipped town.

"We understand their anger," he said. On December 20, Switzerland blocked all flights from the UK and South Africa in connection to the new variants of the coronavirus found in those countries.

A day later, Swiss authorities ordered all people having arrived since December 14 to be quarantined retroactively for 10 days from their date of arrival.

The Austrian ski resort of Ischgl is hoping a new concept for tourism will help recover international tourist numbers, after a massive COVID-19 outbreak last season.